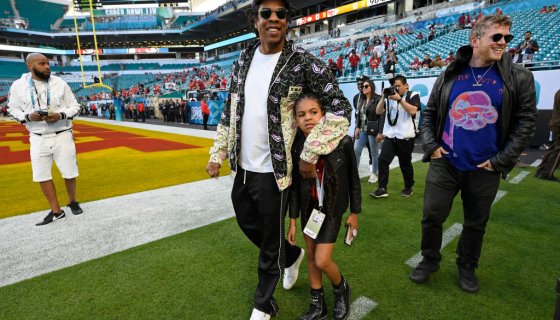 While partnership with the National Football League is the farthest thing on the country’s mind this week Hov has finally addressed his reputation on a new track.

Jigga clearly heard all the backlash from him siding with the NFL. In the new album that , the Brooklyn native lyrically spins himself out of another jam. On the track “Flux Capacitor” he explains his position while still flossing his chips. “Why would I sell out? I’m already rich, don’t make no sense / Got more money than Goodell, a whole NFL bench / Did it one-handed like Odell, handcuffed to a jail / I would’ve stayed on the sideline if they could’ve tackled that sh*t themselves” he raps.

The bars point to August 2019 when formally partnered his Roc Nation agency with the football platform in the midst of ongoing allegations that the NFL blackballed Colin Kaepnernick. Naturally the move left a sour taste in a lot of people’s mouths at the time. Fast forward to the diversity and inclusion represented at the Superbowl LIV halftime performance and funding provided to social programs benefiting the under served and a lot of the criticism has since been quelled.

The week of the monumental game Carter detailed the strategy in an interview with The New York Times. “We didn’t say, ‘Let’s go make some money off the NFL,’” he explained. “The rapper added he could deal with criticism over the partnership if it helps white football fans realize they should care about police brutality, too. As long as real people are being hurt and marginalized and losing family members, then yes, I can take a couple rounds of negative press.”

You can hear the track below.