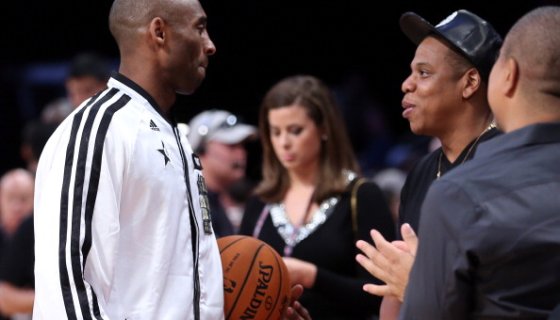 Pretty much everyone that has directly interacted with Kobe Bryant has shared a story about the late NBA superstar. Speaking at his lecture series in partnership with Columbia University, got candid about his final conversation with Bryant.

Jigga was asked by an attendee about his deep relationship with sports with his agency, and the passing of Kobe Bryant, Hov revealed that the final conversations with Bryant were primarily about the joy he got watching his 13-year-old daughter play the sport he loved.

“Kobe was a guy that looked up to me, and we’ve hung out multiple times. He was last at my house on New Year’s, and he was just in the greatest space that I’ve seen him in. One of the last things he said to me was, ‘You’ve got to see Gianna play basketball.’ And that was one of the most hurtful things, because he was so proud.”

Hov further added that he could tell by the look on Kobe’s face that he knew Gianna was destined for sports greatness. “I looked and him and said, ‘Oh, she’s going to be the best female basketball player in the world,’” he told Kobe. “He was just so proud of what he said. So that’s really a tough one, and my wife and I have taken that really tough. Just a great human being and was in a great space in his life.”

“Just a great human being and was in a great space in his life.” pic.twitter.com/QJ1PTqkPmq

Kobe and Gianna were among nine people who tragically died in a helicopter crash in Calabasas, California, last month. Bryant’s wife Vanessa has been very active on Instagram sharing, reflecting on the lives of her late husband and daughter and even sharing videos from a ceremony from Gianna’s school where they retired the young basketball star’s no.2 jersey.

My Gigi. I love you! I miss you. You’ve taught us all that no act of kindness is ever too small. Mommy is still and will ALWAYS be so proud of you mamacita. ❤️#2 🏀

The date for at the Staple’s Center has also been set as well.