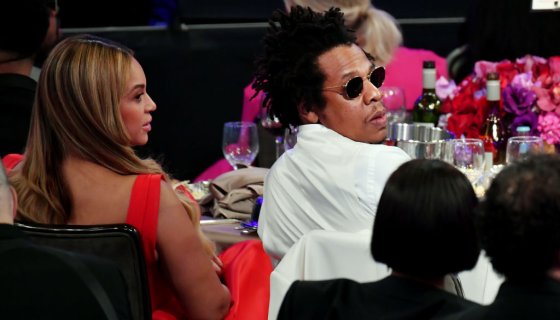 If you are calling into question you can now put the trolling to rest. Hov has addressed the perceived faux pas in great detail.

Last week J and Beyoncé attended Superbowl LIV as part of Roc Nation’s partnership with the NFL to foster better cultural sensitivity. During the performance of the National Anthem the two celebrities were spotted sitting. Given that Colin Kaepernick and his kneeling for justice all got us to this point the have come under fire.

As spotted on HipHopDX the “Song Cry” rapper recently made an appearance at Columbia University and he cleared up the situation. When asked if the move to sit was intentional he responded “it actually wasn’t. Sorry. It was not premeditated at all.” He went on to give the play by play behind the moment. “We immediately jumped into artist mode,” he explained. “I’m really just looking at the show. The mics start. Was it too low to start?”.

Jay added that they were really taking in Demi Lovato’s live show. “The whole time, we’re sitting there, we’re talking about the performance and right after that, Demi comes out and we’re talking about how beautiful she looked and how she sounds and what she’s going through in her life for her to be on the stage, we’re so proud of her.”

He also pointed to his partnership with the NFL that afforded Roc Nation to coordinate a diverse halftime show as his protest. “It just happened,” he noted. “I didn’t have to make a silent protest. If you look at the stage, the artists that we chose, Colombian [Shakira], Puerto Rican J. Lo … we were making the biggest loudest protest of all.”

You can see his explanation below.