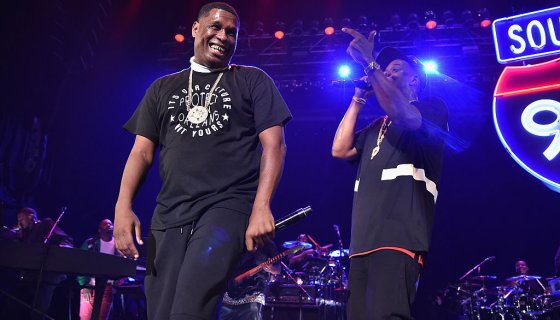 is a highly-gifted enigma of an artist, that much about him cannot be argued on any level. But more than that, he, like many other creatives, are hesitant to share their art due to critiques like the one to follow and his debut album, , shows the promise of what should have been and perhaps what could come.

Because of the nature of social media and the thirst to be first, listeners have been divided by either praising the album or flat out calling it a failure after just three days since its Friday (March 13) release. Some observers feel that A Written Testimony isn’t a true debut as it prominently features Roc Nation honcho , who delivers scene-stealing performances on each of his appearances. It is our opinion that this fact should not cloud your experience.

After giving the project around two dozen spins in several environments, what cut through overall is that Jay Electronica has an undeniable presence, no doubt bolstered by the mystique that swirls around him. His baritone voice and sometimes imperfect diction force one to lean in and absorb his lyrics, peeling layers back after repeated listens. The mastery of words and the reverence he consistently pays to his Islamic faith is refreshing and necessary in an age where depravity rules.

It is nearly impossible to go into A Written Testimony without hauling in the hype that surrounded Electronica in 2009 with the release of his still-potent Just Blaze-produced single “Exhibit C,” which stands as perhaps the best display of his formidable gifts. And it should be said that Electronica’s pen is still razor-sharp across the 10 tracks that make up the debut but the heavy lifting wasn’t done alone and that can’t be glossed over.

The album opens with one of Electronica’s favored methods of using speeches and obscure music soundtracks to set the table. The self-produced “The Overwhelming Event” features the voice of the Honorable Minister Louis Farrakhan of the Nation of Islam delivering a speech that ushers in the tone of the album and leads into the blistering “Ghost of Soulja Slim,” opening again with a speech from Farrakhan and then blends into Jay-Z’s verse.

At 50, Hov’s pen is sharp as ever and the looseness of the style he employs over Electronica’s murky sample will go down as one of the best performances of the year. But as unorthodox and slippery as Jay-Z was, Jay Electronica matches it with an equally dextrous display. The album then moves into “The Blinding” and is one of the few tracks not helmed by Electronica with G. Ry, AraabMUZIK, Hit-Boy and Swizz Beatz on the boards and Travis Scott on the hook.

Jay Elec’s vulnerability placed next to Hov’s confidence is notable, but one wonders if more outside production would have given way to more complete-sounding songs such as this one. The Alchemist provided one of his drumless loop-heavy offerings for “The Neverending Story,” and Elec and Hov again drop kingly bars in talking voice tones that melt into the production effortlessly.

This track, while lyrically precise, highlights a flaw that A Written Testimony is devoid of anything that can be played on big speakers. It isn’t known how he would tour this album because, largely, the album lacks the knock of “Exhibit C” and of course, it’s understood that lyrics should be the focus yet it feels as if there was a missed opportunity to attract the casual fan or the curious in favor of esotericism.

Another knock on the album is the inclusion of the previously-released “Shiny Suit Theory,” an amazing song featuring The-Dream that’s nearly as old as the aforementioned “Exhibit C” but should have been omitted or at least updated. Once again, the track lacks drums and sucks out the potential momentum of the project that does get a jolt from the excellent “Universal Soldier” which features vocals from James Blake. That good favor is undone with the messy “Flux Capacitor” which pays homage to New Orleans rapper Big Elt’s “Get The Gat” song and uses the format of the song for its hook.

Making no bones about it, Jay-Z outshines Jay Elec, who either wasn’t in tune with the beat or was going for an intentionally off-kilter style. Either way, it is completely jarring how out of place the track sounds in the context of the rest of the project. Courses are corrected with “Fruits Of The Spirit” with No I.D. on the production and Jay Elec delivering a performance that is among the best of his career, although the song is short in length.

To go back to what we said about the promise of the album, “Ezekiel’s Wheel” featuring Jay-Z on the hook and bridge along with The-Dream showcases what should have been the running theme of the album. Confidence and clarity are the aims of this record and while we learn nothing new in the decade and more that we’ve waited for him, Jay Elec is content with keeping himself shrouded from the outside world on his terms.

The project ends with the somber “A.P.I.D.T.A.” and was apparently recorded the same day the world was shaken by the news that Kobe Bryant, his daughter Gianna, and the other families lives were lost in the horrific crash that many are still processing. The heaviness of the mood is apparent in both Hov’s chorus and the weariness in Elec’s vocals. In many ways, it’s made sense to end the album on this note considering the pace never truly quickened much and whatever points that needed to be made were done to Elec’s specifications.

A Written Testimony isn’t perfect. At times, it feels like a miscalculated attempt for Jay Electronica to assert himself as one of the greats as he’s long been hailed. Yes, we’ve finally got a project, and it isn’t Act II: Patents Of Nobility but it’s something we can collectively hold on to. As with Act I: The Pledge, which opens with Just Blaze and Erykah Badu both praising Elec’s genius and also mentioning his reluctance to step into the spotlight, he is still contending with the expectations of being a grandmaster of his field. If nothing else, Jay Elec should know Hip-Hop needed him back and this feels like an appetizer with all due respect.

With the doubts put to rest that he can put out music and still hold his own in the booth, may we all be so lucky to hear more of Jay Electronica’s greatness sooner than later.

Check out the streams of A Written Testimony below.