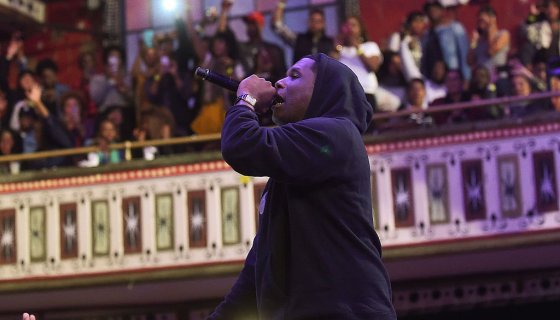 The wait for ‘s debut album appears to be nearing a close, and it comes with the unveiling of the project’s tracklist. Completely written in Arabic, the loosely-translated tracklist for features 10 tracks in all if it is indeed the final listing.

Since last month, the entire world has been hoping that the news of an album wasn’t just hype as fans have been promised a full-length a few times prior. However, the rollout for the album, along with social media postings from the New Orleans MC himself and his compatriots, all point to signs that this is a go.

Apple Music shared a tracklisting for the album and it has been loosely translated using Google Translate and reads as follows:

1. “The Omnipotent Event”
2. “The Ghost of Soulja Selim”
3. “Blinding” featuring Travis Scott
4. “The Eternal Tale”
5. “The Cosmic Soldier”
6. “The Brilliant Suit Theory” featuring The-Dream
7. “Intensive Flowing”
8. “The Fruits of the Soul”
9. “The Wheel of Ezekiel” featuring The-Dream
10. “Praise Be to God”

It could be assumed that “The Brilliant Suit Theory” featuring The-Dream is actually “Shiny Suit Theory,” a previously released song that features Jay-Z. As it stands, it isn’t known how much Hov we can expect on the project as some have suggested this might be a Watch The Throne kind of situation.

So far, the only other features listed aside from The-Dream is Travis Scott, which really bodes well for listeners hoping to see how strong Jay Elec’s pen is since blazing a great number of tracks with his visual and esoteric lyrics since 2007.

Fan reaction to the A Written Testimony has been robust and there is also chatter that the three-city listening session slated for today (March 12) has indeed been canceled by TIDAL although that news has yet to be confirmed the streaming service’s social media accounts.

The marketing for this Jay Electronica album is epic! https://t.co/QaI1MxjIzn

Jay Electronica about to tell niggas the cure for Coronavirus

At TIDAL, the health and wellbeing of our employees, members, and artist-partners is our top priority. Based on the guidance of health officials and the growing impact of COVID-19 (coronavirus), we’ve made the difficult decision to cancel all of tonight’s listening events

Jay Electronica got Travis Scott on his album pic.twitter.com/USz6U7obFg

This Jay Electronica album about to be some hot ass I’m calling it right now. pic.twitter.com/BY14sl57KS

After one listen of Jay Electronica’s album. pic.twitter.com/OXjg3fv56B

Y’all niggas after listening to the Jay Electronica intro pic.twitter.com/gVRCDOw0O3

did Jay Electronica just release his tracklist in Arabic ??? nah man i wanna fight him

Yeah you know we're living in the last days when Jay Electronica is finally releasing his debut album. 🙏🏽 pic.twitter.com/Vnz2XxCf1Y

Jay Electronica had a fucking decade to release an album. Then a pandemic hits and he's like, "It's go time." 😭