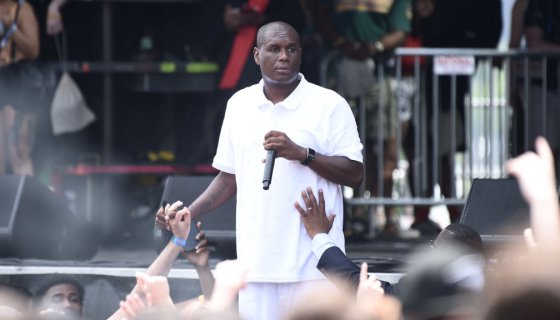 took leave of his Ayurvedic steam chamber and took to Twitter to announce that his long-awaited debut album is completely done. While many fans have heard an announcement of this fashion before, some listeners are hopeful that the New Orleans lyricist will produce the body of work.

With no other tweets present in his timeline, Jay Elec shared details of the new album, which appears to have the working title of A Written Testimony.

“Album done,” reads the first tweet of the announcement tweets. It was followed by a tweet of a lyric that read, ‘…my debut album featuring Hov man this is highway robbery.’”

Jay ended the tweet string with, “A Written Testimony.”

Fans of Jay Elec have heard such promises before only to clutch firmly to dozens of loosely released songs, , and teaser tracks as they awaited Act II: Patents of Nobility and several songs assumed to be connected to the project have surfaced over the years.

With their patience tested, many have abandoned all hope that Jay Elec will drop and shift the Hip-Hop universe as he did with 2009’s still-potent “Exhibit C” with Just Blaze, and the momentum of that period of time has long fizzled in the eyes of observers.

However, as evidenced by all the chatter and reaction to the album news, which we must fairly say ranges from excitement to reserved skepticism, there apparently exists interest in hearing what Jay Electronica has to say.

“…my debut album featuring Hov man this is highway robbery”

Recorded over 40 days and 40 nights, starting from Dec 26

After all these years, Jay Electronica is finally ready to disappoint us.

Jay Z’s 5 likes ever are all Jay Electronica and the album he dropping 😳 pic.twitter.com/Onn95mknzK

We’ve always said Jay Electronica is one of the Best ever because he found a way to exist without having to continue to play the game pic.twitter.com/6HLxpSIB6F

Me waiting for Jay Electronica to drop this album pic.twitter.com/VZBqAPsIqC

Jay Electronica has been gone for 11 years but he made his album in 40 days… pic.twitter.com/0yBqXnvTWf

It’s been 10 years since I first discovered Jay Electronica and i am finally getting his debut album https://t.co/pkdk3c8e7I

Me believing Jay Electronica is actually done with his album and going to release it in my life time pic.twitter.com/ScIqbOrnMa

I need that Jay Electronica project so I can take 15 seconds of him talking about Amenhotep III Pharaoh's rule in June 1388 BC and throw it over a video of Kratos and Atreus wearing kufis.

Hov been growing his hair out waiting on this Jay Electronica album.

When Jay Electronica finally drops his album because the Rothschilds aren’t paying for his shit anymore pic.twitter.com/XwJOPdmm1q

After I force bae to listen to the new Jay Electronica album pic.twitter.com/k1vFl1iAfX