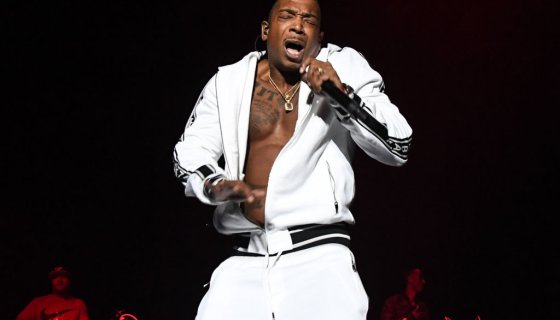 Jefferey Atkins, aka , has once again become the laughing stock of Twitter, and it has nothing to do with and models wanting to swim with pigs.

Ja Rule was the butt of Twitter’s jokes once again when a commercial featuring the “Holla, Holla” rapper going hard in the paint for a local gyro restaurant name Papa Cristos. In the commercial the looked like Ja did from his basement, Jeffery Atkins puts on his salesman hat hilariously tries his best to plug the Greek food while having some serious trouble trying to pronounce  “tzatziki” and “oktapodakia.”

Of course, Hip-Hop’s biggest bully and Ja Rule’s nemesis caught wind of the commercial and used the opportunity to clown his favorite punching bag. In a tweet, hilariously stated:

“This is what happens when you fuk with me, I’ll have you and your whole label selling Gyro’s go ahead try me!”

👀this is what happens when you fuk with me, i’ll have you and your whole label selling Gyro’s 🤨go ahead try me! #bransoncognac #lecheminduroi pic.twitter.com/7bfpo4fDUC

Now to be fair to Ja, it turns out that he did the commercial to help raise money for @NoKidHungry for a new TBS show called Celebrity Show-Off hosted by Mayim Bialik (Blossom). The catch is celebrities are challenged to “produce the most compelling content from their homes.” The longer he stays on the show, the more money he raises for his charity. Rule confirmed his participation in a tweet thanking Twitter for helping to make his fake commercial trend.

Thanks for making my commercial trend!!! With your help we raised money for @nokidhungry and will be doing so every week on @celebshowoff so vote for ya boy!!! Show premieres tomorrow on @TBSNetwork Opaaa!!! 😂🤣😭 pic.twitter.com/TfqVz99TwS

Just found out in context that Ja Rule was helping out a mom and pop shop struggling at this time so shout out to him 🙏 pic.twitter.com/PbrbZ7uenQ

Unfortunately, when it comes to having Ja Rule, nothing can be taken seriously. A relatively good deed turned to out be great material for hilarity. At least he got 50 to unwillingly help him out in the process.

While we commend Jeffrey for looking out the local businesses, he still gonna catch these jokes. Hit the gallery below to see the reactions to Ja’s Papa Cristo’s commercial.

Yoooooo Ja Rule in this commercial 😩

If Ja Rule career was a sandwich pic.twitter.com/WrttNEfeR6

This is the single greatest work of art to emerge in 2020, and Ja Rule is now forgiven for the whole Fyre Fest thinghttps://t.co/eAg9R1YppU

Lol yo what is Ja Rule going through?

Niggas must’ve told Ja Rule “bet you won’t do it for $20” pic.twitter.com/NMnNkLO3f5

Ja Rule got paid a ziplock bag of lamb meat for this commercial pic.twitter.com/mDJVxI3SkE

Man, when fifty gets hold of this Ja Rule commercial….😑 pic.twitter.com/rk1CfNS5xz

Me waiting for 50 Cent to roast the living shit outta Ja Rule for that commercial pic.twitter.com/kdpipwZPkG

this nigga ja rule ain’t even have no shoes on pic.twitter.com/SumSMkAWQB

ja rule digging himself out of that fyre fest debt one day at a tyme https://t.co/xu0ypVNyUQ

Everytime i see that video of Ja Rule on my timeline…… pic.twitter.com/cRoOmxf646