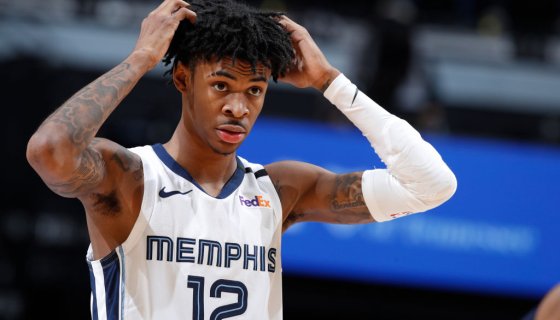 Memphis Grizzlies rookie phenom, Ja Morant wants all the smoke. He’s got #NBATwitter applauding him after he took apparent shots at both Andre Iguodala and Steph Curry.

Give Morant the Rookie of The Year trophy already, is what many NBA fans are saying. Morant had Twitter buzzing following comments he made when it was reported by David Aldrige that the Memphis Grizzlies and Andre Iguodala “mutually agreed” that he would not suit up for the team this season.

The electric guard agreed with the sentiments of teammate Dillon Brooks sharing a Tweet from sports columnist Mark Giannmoto that shared Brooks feelings towards Iggy:

“I can’t wait till we find a way to trade him so we can play him and show him really what Memphis is about.”

Both comments came following the Grizzlies victory over the Detroit Pistons on Monday night (Feb.3).

Currently injured Golden State Warriors’ sharpshooter, caught wind of the comments and replied to Morant by sharing a photo of his former teammate holding the Larry O’Brien trophy with the shush emoji.

AND NOW STEPH CHIMING IN: pic.twitter.com/fhxnREa48u

Morant didn’t back down and kept the same energy replying under a Tweet shared by ESPN’s Rachel Nichols with a picture of Kevin Durant holding his finals MVP trophy. Twitter users quickly assumed he meant that without Durant’s help, Curry or Iguadola wouldn’t have those rings he would be boasting about.

When someone tried to remind Ja that Steph and Klay are killers, Morant responded he is well aware but pointed out he is a killer too.

didn’t say they wasn’t killers. didn’t say i wasn’t a fan of their game either .. but i’m a killer too 💯

lol delete it for what? if you scroll down my twitter you’ll see me talking about curry a lot . probably some other players too . i was a fan & still a fan but iann scared of him 😂😂

We love this kid, we really do. Unfortunately, the Grizzlies and Warriors will not meet up again this season, we definitely will be marking the games off on our calendar cause things will get spicy on that court. You can peep all of the reactions in the gallery below.

Ja Morant says his father was his first hater. The sky is the absolute limit for this man.

ja morant is the fucking best

Steph curry on his way to drop 50 in 3 quarters on ja morant in the first round next year pic.twitter.com/9TldpXI1Ap

Grizzlies are lucky they dont play GS again this season. Not because of Steph coming back and busting their ass, but Draymond flagrant fouling Ja Morant through the court and placing a printed copy of that KD tweet on top of his corpse. Some men just want to watch the world burn.

Steph Curry when he returns and plays Ja Morant pic.twitter.com/wuT3yAuk3g

People forget Ja Morant has as many Finals MVPs as Steph Curry pic.twitter.com/EwVtGSpJqU

Ja Morant talking big shit just like a real hooper with that dog in them is supposed to… and *whispers* he’s not wrong.

Ja Morant when he sees Iggy this morning in practice pic.twitter.com/jluyaWzL1x

this Ja Morant/Iguodala beef is why there needs to be a 1-on-1 grudge match event added to All-Star Saturday night. if both players agree, put a ball at the foul line, play to 11, call your own fouls, and let the gods decide your fate. but most importantly: let us watch.

This app: "I wish players were more like Kobe and were serious about being competitive and their craft."

Also this app: "Ja Morant should stay in his lane."