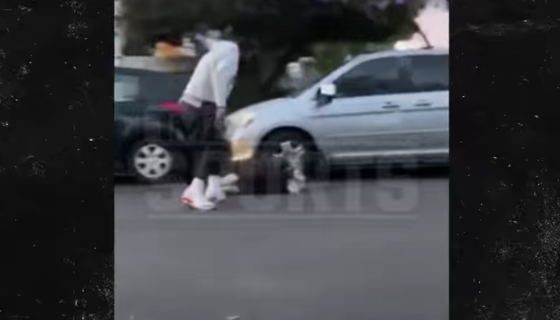 When you’re out causing mayhem, you still better know who not to f*ck with. Case in point, a guy who bashed a car window learned this the hard way went the vehicle he wrecked turned out to belong to NBA guard , who in kind blessed the vandal with the most proper of fades.

It’s 2020, so of course, the incident was caught on video. TMZ posted the footage and Smith is seen putting the hands and feet on the alleged violator. Yes, we took note that Smtih was rocking a clean pair of Air Jordan 3 while he kicked the guy.

J.R. took to the Internets to give his side of the story.

“I just want you all to know right now, before you see this sh*t somewhere else, one of these little motherfucking white boys didn’t know where he was going and broke my f*cking window in my truck,” Smith said in a video he posted. “Broke my sh*t. This is a residential area. There wasn’t any stores over here.”