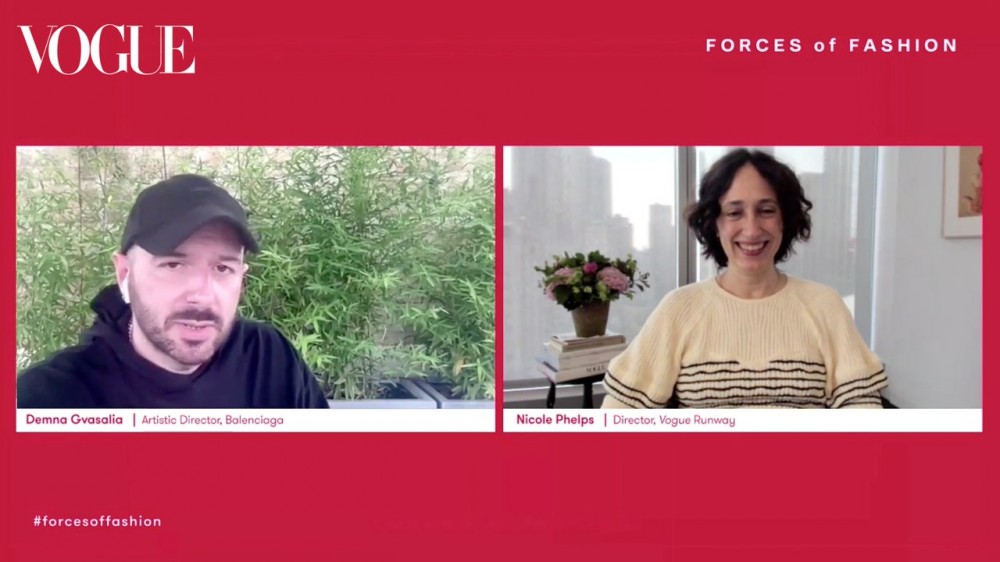 With each new couture season comes the inevitable question: Is couture relevant now? Demna Gvasalia gave us an answer with an arresting couture debut at Balenciaga: a resounding yes. He discussed his 63-look collection of jeans, silk “feather” coats, and chain-mail aran “knits” with Vogue Runway’s Nicole Phelps this morning at Vogue’s annual Forces of Fashion summit. It was through designing and being fit for his own made-to-measure suit, he said, that he discovered “couture was a place where I really found that peace for myself as a designer.”

That sense of calm came through in the runway’s completely silent atmosphere—no soundtrack because, Gvasalia said, “I really wanted the clothes to speak for themselves”—and also in the certainty with which he reconsidered the dogmas of both couture and of Cristobal Balenciaga’s work. “I didn’t want this to become a tribute, but rather my vision of couture today, infused by the heritage of this couturier who, to me, is still the master of us all,” he said. “There was no point in me doing this robe de chambre of Mona Von Bismark,” he continued, referencing one of Cristobal Balenciaga’s eccentric clients of the ’50s and ’60s, “I needed to make it modern.”

Gvasalia started with many of Balenciaga’s iconic pieces on his mood board and reconsidered them either through material or slight changes to silhouette. Among his fabrication highlights are a hand-loomed Japanese denim, silk threads cut and treated to appear like feathers, and a leather that was “caressed by hand for four hours” to soften the texture to something more akin to terrycloth. For pieces that “were already modern” like Balenciaga’s 1967 single-seam wedding dress, Gvasalia simply updated the fabric to a silk molton, more akin to a jersey than the pure silk of the original. That look was topped off with a simple transparent veil; others had dome-like black toppers by Philip Treacy. “I love the uselessness,” Gvasalia said of the hats. “We don’t really need it, it’s a sheer luxury.”

Putting Balenciaga couture at the top of the Balenciaga brand pyramid has been a luxury for the designer, too. Not only did it bring him a certain placidity in his career, but it has also helped reshape the business. He outlined a new structure of the Balenciaga brand, couture at the top, a wardrobe essentials line of “businesswear” beneath it, and the brand’s ready-to-wear at the bottom. “Couture is the essence of Balenciaga, it’s really the starting point, not a bag, not a sneaker, not a logo T-shirt—all of which which, by the way, I love designing,” Gvasalia said. But couture was also a way for him to break out of the “streetwear” label so often applied to him and his work. “I’ve been kind of labeled by the industry, as somebody who really is very related to streetwear, I mean rightfully so, but there was this part of me that always existed, even before I started doing fashion, and I needed to manifest that.”

The new expression of his work comes with a focus on handwork and craft. “It was a very manual, hands-on atelier approach. I have to say I learned immensely from this experience,” he said. Not only did he work endlessly in fittings—“my favorite part is having scissors and pins and and cutting those pieces and sculpting silhouettes and shapes out of them in relation to the body of the person who wears it”—but he also had a couture suit made for himself by the Balenciaga atelier.

“I finally realized why I never wore a suit,” he laughed, explaining that couture is not just about the final item but the experience of having a garment made and tailored for you. “It’s something that only the wearer can know. It’s not only the posture, it does something with your mind. It’s a very psychological thing,” he said. “I learned about fashion and what I love about clothes: It’s the way clothes make us feel. I think in ready-to-wear it’s hard to experience it today because we do too much product in a too short period of time.”

Translating that personal, sensitive experience to a new generation of couture clients while maintaining relationships with current ones is Gvasalia’s “next challenge.” He’ll do it, we assume, with the same gusto of his ready-to-wear outings, fusing politics, technology, and craft. “To be relevant and to have a conversation with the audience we have to talk about those things,” he said, referencing his many political expressions on the runway. “I would find it very boring to make decorative fashion and not talk about all those issues, just draw beautiful things and pretend the world around me does not exist. Fashion is a reflection of reality and this is my work.”