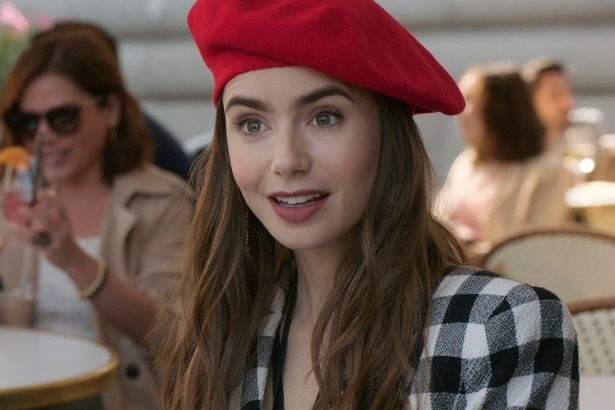 Searches for some of the ringarde’s most divisive looks soared when the show aired, according to Lyst’s annual fashion report

Queen of the Ringardes Emily Cooper had most of us screaming into a pillow throughout much of Emily in Paris, as she mispronounced countless extremely rudimentary French words, got off with her sweet new friend’s boyfriend, and did the unspeakable by momentarily turning pretty much the entire fashion industry off Tabis. For all those of us grimacing at her sartorial choices, however, a huge number of viewers were seemingly taking notes.

According to Lyst’s annual Year In Fashion report, which landed this week, page views on Kangol’s bucket hats soared by 324 per cent after Emily rocked the style that earned her the extremely cutting nickname ‘Bucket Hat’ from bratty actress Brooklyn Clark. Searches for Ganni skirts were also up a casual 289 per cent following the episode in which she was seen wearing a yellow asymmetric style by the Scandi label, with those looking for berets climbing 41 per cent week-on-week after the show first aired. With Netflix recently confirming two more seasons of the divisive show are coming, the good lord only knows what stylist Patricia Field has in store for us next.

Other big pop cultural moments that saw people rushing to the Google search bar came via Cardi B and Megan Thee Stallion’s immediately iconic “WAP” video, as those looking for leopard and snakeskin prints surged by 201 per cent after its release, and early-lockdown binge-watch Tiger King, which gave Kenzo’s signature tiger motif a boost of 200 per cent in April (no news on Carole Baskin’s flower crown, however). As we previously reported, Beyoncé’s Black Is King visual album was a huge moment for Marine Serre searches, which jumped 426 per cent in just 48 hours – truly, her power.

Elsewhere, it was a huge year for cosy fashion (duh), with Crocs, Birkenstocks, Ugg slippers, Nike sweatpants, Prada shorts, and H&M’s flouncy ‘nap’ dress all doing big numbers among online shoppers. No surprises that we were all over masks in a big way – searches were up 502 per cent, with those looking for Off-White’s logo version climbing 450 per cent between January and March alone.

Pyer Moss, 1017 ALYX 9SM, and Martine Rose were among the top-ten ‘breakout’ fashion brands, with Telfar taking second place behind Marine Serre thanks to its uber-sought-after shopping bag, which experienced yet another surge in popularity when AOC carried it on Capitol Hill earlier this year. Notably, the progressive politician also earned herself a place among 2020’s most powerful fashion figures, alongside the likes of Harry Styles, Lizzo, Travis Scott, and BTS’s Kim Namjoon.

Revisit a host of looks from Emily in Paris in the gallery above and check out the whole report here.