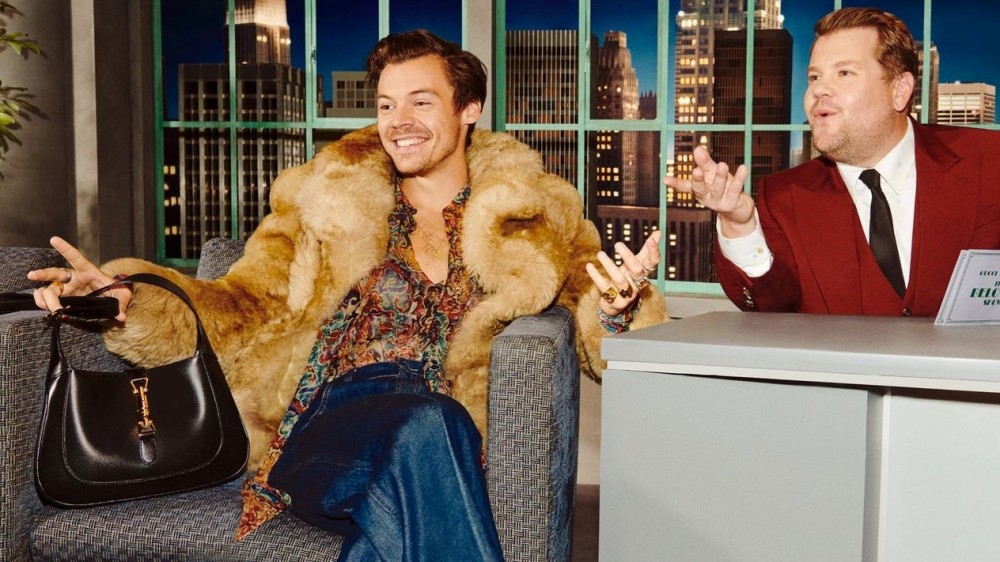 Gucci released its new retro-talk-show-themed Beloved campaign on Thursday, starring Harry Styles (among other stars) as cheeky guests of James Corden. After whispering “Oh my sweet lord” into my empty apartment, I felt a million things for the Harmony Korine shoot, a luxe hippie feast for the eyes in which Styles wears a fur coat and flared jeans: Harry is an earth angel (the principle which underpins my life); his performative banter with Corden in an accompanying video is joy incarnate; and, most of all, I want his entire outfit down to the purse. It’s was a sentiment shared by author Robinne Lee: “I may have to wear this to the carpool pickup lane this afternoon,” she tweeted.

This was not a new sentiment.  It began with a sudden, irrepressible desire to wear collared shirts under sweaters again, a look I left at my college sorority house. Then came a newfound interest in where my grandmother’s pearls were (in a jewelry box at my mom’s house for the past decade). Not long ago, an argyle sweater vest I didn’t remember buying (at midnight, via Instagram, probably) arrived at my doorstep. When I came to and found myself about to press “Buy Now” on a feather boa shortly after the Grammys, I could no longer deny the plain truth in front of me: it’s not just that I love Harry Styles. I want to dress like him, too.

Parroting Styles’s style has become a form of adulation for his ardent fandom. For Harries, it’s a fine line (sorry) between adoring him and also kind of wanting to be him: daring, playful, nonconforming. I felt it acutely on Grammy night, when Styles wore a leather suit (by Gucci, of course) and nothing underneath. I had a sudden burning desire to resurface my own leather pants, which have largely been retired during COVID-19, and form a backup dancer trio. Styles’s penchant for Vans—namely the weathered, cream-colored pair he wore for his Vogue cover shoot—revived their low-key cool factor in my eyes, making me reach for the sparkly pair hanging out in my hall closet. While I’ve always been a sucker for flared jeans, the Frame pair I seldom wear because they require a heeled boot has become all the more intriguing to me. The all-too-rare male purse influencer, Styles now has me coveting a black Gucci shoulder bag, too.

Shopping Alessandro Michele’s look books are, tragically, not fiscally possible for me (as much as I still ache for the chick-egg sweater Styles wore on NPR’s Tiny Desk concert). But Harries are a determined and industrious lot. After his Today show performance in that now-legendary JW Anderson cardigan, a flurry of patterns to recreate one’s own emerged on Etsy. Many of the accessorizing tricks perfected by Styles, with help from his stylist Harry Lambert, are, in fact, widely accessible.

There’s the collar-plus-sweater-plus-pearls combo, as popularized by the kindly sex god in the pre-pandemic Fine Line press blitz. One Styles-worshipping friend bought the hot pink La Ligne beanie he wore while out in L.A. earlier this year (sadly, it’s now sold out); another decks herself in his preferred Eliou pearl jewelry (like the necklace seen in the “Golden” video), plus copious rings and alternating pastel nails. She’s also been known to tie the very blue imogene + willie handkerchief Styles wore in Italy in 2018 around her neck, and loop her sunglasses through it just so. Call us crazy, but in the words of Styles’s “Cherry”: “There’s a piece of you in how I dress/take it as a compliment.”

Élious All The Feels Pearl Necklace