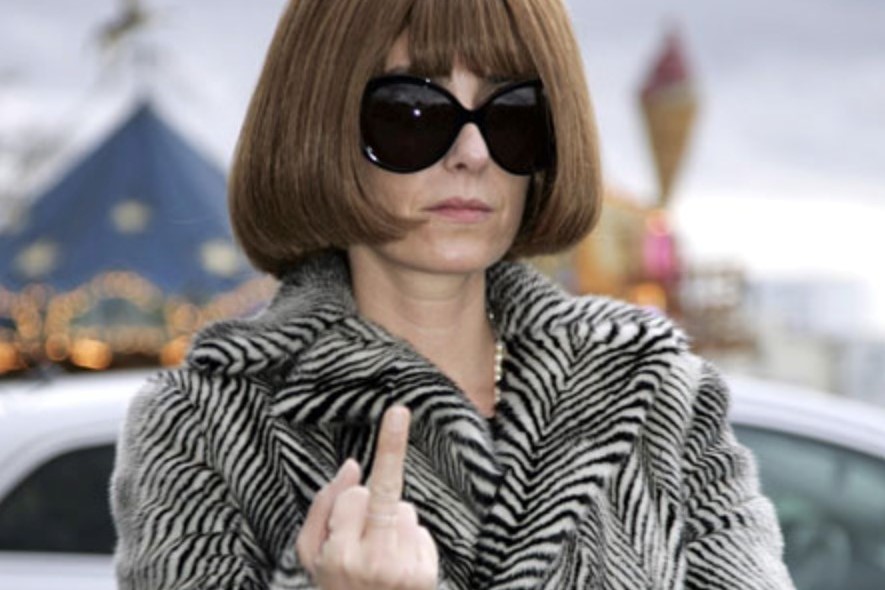 Most of the clothing paraded at fashion shows will never leave the runway – one version is made, to be worn once, by one model. In fact, thousands of garments are never commercially produced, because on the catwalk, creativity is simply a ruse for all the boring stuff that actually sells. So to watch these pieces trundle out season after season – let alone write about them – is founded in fantasy. In other words, it’s all a scam. And the reason as to why that’s not common knowledge is because the gates of fashion week are swaddled in secrecy, impervious guest lists, and PRs in North Face jackets.

While it may be uncouth to admit, the allure of fashion resides on the exclusivity of its most glamorous events. Tax the rich, but for god’s sake not too much, because we all want to judge them at the Met Gala. It’s almost as if the pull of the industry has very little to do with its creative output. Art? No, it’s all about free prosecco, bags of popcorn, and wearing things that set you apart from your home friends. And as for social media – and all its overtures to opening up the world – it failed to democratise fashion. Instagram just made even more people want to see the inner workings of the gilded cage for themselves. The same goes for TikTok and its fashion week entry hacks – a toilet bowl of tips to fake your way into “parties surrounded by models”.

It’s all a status game. And whoever makes it closest to the runway wins. Like Agnès Boulard, a French columnist who dressed up as Anna Wintour, fooling everyone to sit front row at Lanvin’s SS08 show. Or the gonzo journalist, Oobah Butler, who scammed his way into Paris Fashion Week off the back of a pair of Brixton market jeans. Or Marie Benoliel, who elbowed her way onto the Chanel SS20 runway before getting escorted off by Gigi Hadid. Or me, who used to call up PRs pretending to be my own “assistant”, begging them to put my “boss” on the list.

For every actual fashion week invite, there are tens of hopefuls scheming their way inside. Not to mention those pitched outside, desperate for a place on a street style round-up. The act of simply getting into presentations, shows, and parties, is sometimes as lauded as the event itself. And if you’re ballsy enough (and go armed with a water-tight backstory) it can reap rewards. From dropping Paris Hilton’s name at the door, to doctoring magazine invites, here are five times fashion fans have faked it – and made it.

“I ‘borrowed’ a letter from Nicki Bidder at Dazed, which had been pinned to the CSM notice board, as it was requesting interns. I blanked out all of  the information and filled it in myself – for ticket requests for shows, getting into fashion week parties… It worked pretty well” – Gareth Pugh

“My blagging career started while I was in my first year at Central Saint Martins. We lived in a big tower block and in the reception there was a fax machine. We would fax out requests from made up PR companies to fancy West End clubs to get onto guest lists. The high point of that period had to be a McQueen fashion week afterparty at a club called Red Cube in Leicester Square, which was my first experience of an open bar. Things then quickly escalated. I “borrowed” a letter from Nicki Bidder at Dazed, which had been pinned to the CSM notice board, as it was requesting interns. I blanked out all of  the information and filled it in myself – for ticket requests for shows, getting into fashion week parties… it worked pretty well.

Every year, Saint Martins used to take the freshers to Paris Fashion Week, so before we left, I made myself a fake The Face Magazine ID card. Once you’re in Paris, the teachers keep all the tickets they’ve been sent for themselves, so it’s up to you (and your own ingenuity) to get into the shows.  At each show, I’d turn up and pretend to be Andrew Davis’ assistant – it was just the name of the magazine’s fashion director that I’d pulled from the top of the Face’s masthead. My story was always this: “Andrew just called me, and he’s stuck in traffic. He asked me to go to the show in his place!”

It worked every time. Even for McQueen, which was notoriously the hardest nut to crack. The only time that it didn’t work was when the PR at Westwood was like “Andrew’s just gone in!” They eventually took pity on me, anyway, and let me through. Everyone came back from having gone to six or seven shows, meanwhile I had been riding around town on the fashion bus – a large air-conditioned coach that the Chambre Syndicale used to run for accredited press – and had clocked up over 40 shows. I was totally knackered, but it was amazing. Thanks (and sorry!) Andrew.”

“When I was still a student in London I managed to go to almost all of the shows for two seasons by saying that I was assisting some of the big stylists (specifically the ones who were known for their bad attitudes). Often the person with the guest list would confront me with an “um, she’s already inside” or “their assistant is literally over there” and I would say “listen I wish I was here to watch the show, I need to pick up some extremely urgent stuff, please let me in”. With some huge puppy dog eyes and a “please don’t make me call her! You’re gonna get me fired, ffs!” the PR would say “okay just five mins” and honey – guess who watched all of the shows?!

I used to do the same thing in Milan where I would say I worked for Vogue Italia – which I eventually ended up doing, so thank god! Enough with the lies. Once at a fashion week party me and my friend were trying to get in but obviously our names weren’t on the list so we thought it would be funny to queue and pretend to be famous people so we would say shit like: “it’s either Hilton, or Paris Hilton”, “check for the Spice Girls”. The queeny PR just thought we were funny (and desperate) so they let us in.”

“Once at a fashion week party me and my friend were trying to get in but obviously our names weren’t on the list so we thought it would be funny to queue and pretend to be famous people so we would say shit like: ‘it’s either Hilton, or Paris Hilton’, ‘check for the Spice Girls’. The queeny PR just thought we were funny (and desperate) so they let us in” – Riccardo Chiacchio

“I’d hang around outside wearing something extreme and trying to get my picture taken and head to the communal areas. I then did an internship for a fashion PR and when I wasn’t cleaning up the piss from the office dog I did a fashion week and was one of the “seat fillers” who sit in the front row when someone doesnt turn up, but I totally did try to pass that off as me being a real fashion press person – whenever someone asked me what I did I said I was a “freelancer” rather than intern. The things we do for a crumb of glamour…”

“So I was embarrassingly old to be pulling these stunts (like 23 or something) but I would walk into the BFC space and claim to be some kind of buyer – I used to say I worked for Harrods because I once did a fashion internship there and had a summer job in Pet Kingdom when I was younger. So not a complete lie. I’d also totally change my LinkedIn page, so when they asked for evidence I’d just pull up a completely fabricated CV with vague titles like “retail consultant”.

It didn’t get me into any of the big, big shows but I had a nice weekend giving myself IBS from the free Nespresso machine in the show space and drinking cava in presentations with the friends I’d force to join me. I now live in absolute dread for the day a PR searches their email for my name and it pulls up some incriminating, completely fictionalised email demanding entry to a show. Oh I was also dressed absolutely terribly (I got street styled by wearing XXL Miu Miu tartan trousers – RIP Miu Miu menswear – charity shop dress shirts, and floor-length cagoules).”

“So I was embarrassingly old to be pulling these stunts (like 23 or something) but I would walk into the BFC space and claim to be some kind of buyer – I used to say I worked for Harrods because I once did a fashion internship there and had a summer job in Pet Kingdom when I was younger. So not a complete lie” – Liam Green

“During my first ever trip to fashion week myself and my boyfriend sneaked into a show at Somerset House by giving our university tutors’ names. When they asked what publication we had come to represent I just said “LAU” – which is technically the name of our university – and we got in absolutely fine. This was in February 2020. It was amazing. Don’t get me wrong, though, we were in the queue for a while and we were getting increasingly nervous as we approached the doors.

It was raining so much that by the time we actually approached the PR I no longer cared, I just wanted to escape the weather. We were able to plot by word of mouth, examining the shows on the schedule, and knowing that our tutors had been on lists at certain shows. Actually, we didn’t even know other people did this, we just completely fronted it because we were so desperate to go to a show. We sat on the fourth row and honestly felt like celebs (or con artists) but I reckon they knew – especially as my boyfriend gave a female name on the door.”

Some names have been changed.