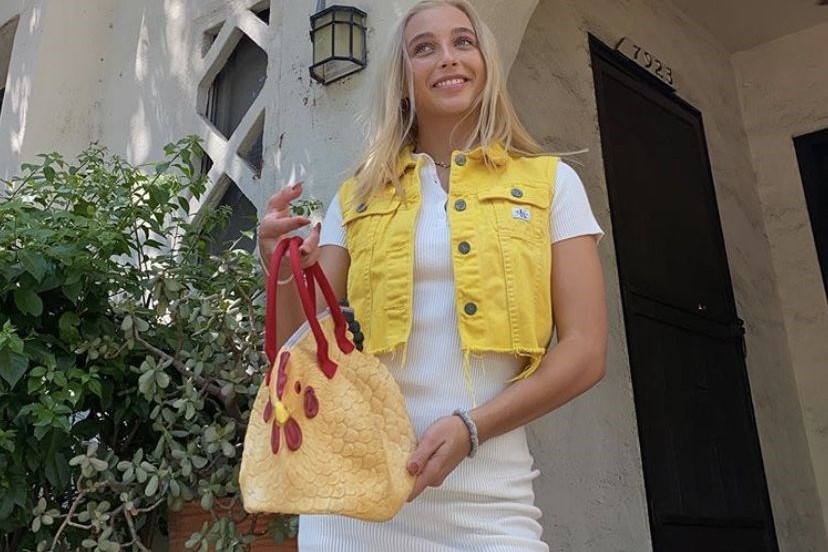 Who IS she? We investigate

We might have been stuck inside wearing sweatpants for most of 2020, but there’s still been plenty of viral fashion trends popping up on our endless scrolls through TikTok’s FYP. From Lirika Mitoshi’s glittery strawberry ball gown and Nike’s flippy tennis skirts, right through to the ubiquitous nap dress, which took over the TL across the summer offering some heavy cottagecore vibes, lockdown has done little to dampen our desire to turn a look – even if said look is put on purely to flex on social media before it’s switched out for pyjamas ten minutes later.

The latest trend bubbling under on TikTok right now is a slightly more obscure one. Although it hasn’t fully taken flight just yet, two distinctive bags, both shaped like a chicken, have been landing on the platform’s FYP with increasing regularity in recent weeks. One style is made from molded rubber with a red handle and matching coin purse, while the other is fuzzy – like an unstuffed stuffed toy with a wing for a pocket. With the rubber version seemingly the OG version (which handily has the capabilities to house a whole bottle of vodka, the fluffy chicken is leading the charge in the popularity stakes, appearing in a huge number of videos.

But where did it come from, why do people love it, and why is it taking over TikTok? Here, we aim to find out.

WHERE DID THEY COME FROM?

Although it may seem like somehow the most 2020 appropriate item – honestly, at this point we really wouldn’t expect anything less random – the rubber bag’s origins lie with French gift shop chain Pylones, which dropped the style in 2011. It also had a previous viral moment in 2013 when American model Theodora Richards was photographed with the purse in hand. In the time since, it’s mostly languished in fashion oblivion, besides a few lucky random sightings at thrift stores across Europe. Its fluffier counterpart, meanwhile, is newer to the scene – the mainstay of kids’ dressing up boxes, this appears to be its first time in the fashion spotlight.

I have the same purse as @emmachamberlain LMAO🤣 bought it from Spain 10 yrs ago :O ##greenscreen ##fyp ##foryou ##chicken ##viral ##emma

WHO’S BEEN SPOTTED WITH THEM?

This summer, the rubber iteration rose to fame when YouTuber and social media influencer Emma Chamberlain showed off the bag in a now-deleted Instagram post. She paired the rubber chicken bag with a white tennis miniskirt and matching baby tee, layered up with a yellow denim vest and platform docs – very Gen Z chicken-chic (or should we say chick?). Otherwise, you can find both iterations all over the #chickenbag or #chickenpurse tags on TikTok. The latest hit seems to be upgrading the bag, either with new DIY straps or tiny chicken-sized babushka scarves tied around its head, and tbh… We’re kind of into it.

WHY DO PEOPLE LOVE THEM?

“The appeal is its humour – and it’s a soft, cute little chicken!” explains Alexa Walkovitz, aka @sluglexa, an avid fan of the bag who shows it off regularly on their TikTok channel. “It’s unique, it makes people happy when they see it. I’ve been stopped about it a few times in public, and have started to get called the girl with the chicken bag.”

WHERE CAN WE FIND THEM?

Currently, the OG rubber chicken bag is sold out on Amazon. Luckily, its fluffy descendent seems to be available on Romwe, Shein, and AliExpress for around a tenner. But while it’s low price has added to its high popularity, the ethics behind the bag are drawn into question given it’s only available through fast fashion sites known for being pretty bad when it comes to sustainability. Keep your eyes peeled for vintage ones on eBay et al if you’re in the market we guess?

SO… WHAT DOES IT ALL MEAN?

Perhaps it can be lumped in with the heady pastoral cottagecore movement that’s sweeping social media, as people dream of an idyllic life in the countryside. Let’s face it, an IRL chicken probably isn’t going to cut it if you’re hoping to get your deposit back when you finally move out of your tiny zone four houseshare, so why not make do with the next best thing. Otherwise, maybe we’re all craving the thrill of uncovering an unusual and incredibly tacky item during an IRL thrifting session? Either way, diving into the trend for many seems to offer a much-needed serotonin boost in this, the darkest of years. “I bought it ‘cause it makes me happy, and the happiness it causes seems to spread with it,” says Walkovitz. “It feels like a friend is coming with me when I use it.”