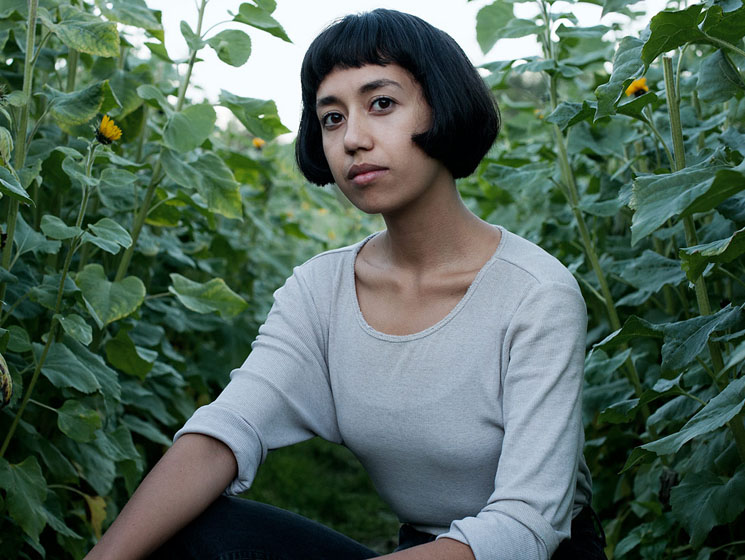 Haley Heynderickx likens being interviewed to being cornered by a bunch people with flashlights; she’s still getting used to having to explain songs she’s created to strangers. “I get more terrified with each one,” she tells Exclaim! “I’m running out things to say.”

So instead a formal interview for her first Canadian press, she has a rambling, intimate conversation, touching on a mutual love Connie Converse — “When I hear musicians with secrets, I feel so close to them. She still has a few songs I can’t figure out” — and a plug for Feist’s Pleasure: “She did a home recording with her friends and it’s a great record for the example her tapping into a feeling. Why is everyone obsessed with everything being polished? You can tell when something is too pristine our ears don’t digest it the same way as something that just feels honest. That’s the best we can do, that’s it.”

What Heynderickx says about Feist and Converse could apply equally to her compelling debut, I Need to Start a Garden. It’s strikingly fresh because its immediacy; whether it’s the sound Heynderickx’s voice wafting around her classical guitar, or the skronky workout she does with her band on epic and electric centrepiece “Worth It,” Heynderickx’s music always feel disarmingly in the moment.

Incredibly, it took Heynderickx three tries, at three different studios, to achieve this. The first was in a barn at Pendarvis Farm in Happy Valley, OR with Colyn Cameron, who recorded Heynderickx’s Fish Eyes EP two years ago. “It was freezing, and we tried to do our best with the equipment, but] it just stopped working,” she says. “I lost faith in the songs and myself. The horse died.” (Hobo, a horse the Pendarvises rescued, was 32 years old; he died during a take one Heynderickx’s songs.)

The second attempt was at a conventional studio, where Heynderickx felt inhibited by insecurity and worries about money. “I just wasn’t happy,” Heynderickx says. “Every day felt like the brink a panic attack. Cause once you know a space costs — I can’t remember whether it was $200, $400 or $600 a day — man, I was so stressed out. It doesn’t feel like a labour love when every moment you’re in a studio it feels like you’re losing money. The last thing I want to think about when capturing songs that were made from a place love, is money.”

Thankfully, the right place to record I Need to Start a Garden “poed” into Heynderickx’s life when some friends decided to open up an in-house licensing studio, Nomah, and had some studio time available before it was going to be busy with licensing clients. Heynderickx’s friend Zak Kimball, who worked at Nomah and co-produced her album, suggested she record there. “Let’s talk about money later,” he said. “Let’s make the best damn thing we can make then we’ll figure out the rest.”

That sounded like a dream to Heynderickx. “I was able to tap into the songs again,” she says. “Instead the first voice in my head being ‘Oh my god there goes $600.’ I got the idea to tap into wanting so deeply for each song to feel like how I felt writing it; instead just settling for a studio take ‘Well everything sounded right and every note was hit,’ I got to choose the takes where I felt I was there, I got to relive that memory. I feel like we got to capture an essence where the songs came from. Having a producer that cares about you being safe in an emotional space, that was really nice.”

Nomah disappeared as quickly as it had appeared after the recording. “It crashed and Zak moved to New York,” Heynderickx says. “I still can’t believe this studio lasted less than a year and gave me a beautiful album.”

I Need to Start A Garden is out now on Mama Bird Recording Co.