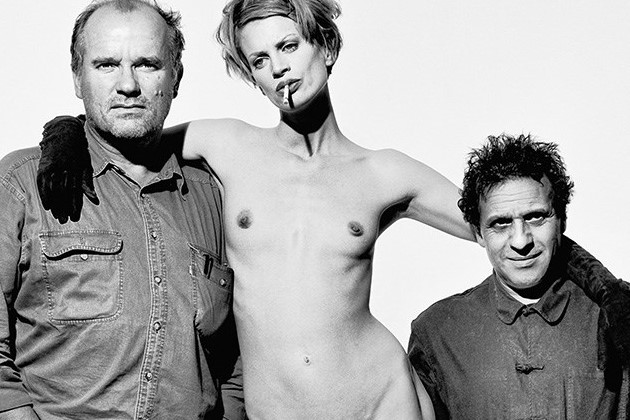 As a new book documenting Azzedine Alaïa and Peter Lindbergh’s creative relationship lands, we chart the iconic designer-photographer twosomes of fashion past, present, and future

It was chance that brought Azzedine Alaïa and Peter Lindbergh to fashion. Before relocating to Paris, they were intent on becoming a sculptor and a painter, respectively. Though they hailed from opposing geographies in Tunisia and Germany, the couturier and photographer cultivated close horizons. Meeting as strangers in the French capital in 1979, the duo soon discovered that they shared the same gaze – a near ascetic use of black, a pull to timeless beauty, and a belief in the superhuman nature of women.

Be it Yasmin Le Bon striding across the puddled streets of Montmartre with a baguette under her arm and a cig dangling from her lips, or Naomi Campbell laughing on a beachfront in Deauville, Alaïa and Lindbergh’s photography ennobled their subjects with a deft use of silhouette, contour, and light, consecrating the age of the superstar model. “Peter and I have known each other since I started out. We know each other very well. We don’t even need to talk. Everything flows,” Alaïa once said of the duo’s lifelong partnership. “Azzedine and I are hand in glove,” Lindbergh later added.

This unique kinship is now the subject of an upcoming exhibition at the Fondation Azzedine Alaïa and an accompanying monograph by Taschen. Making its debut today, a flip through the pages of the book brings some of the pair’s most striking imagery to light, with many of the photographs unseen until its publication.

While the collaboration between Alaïa and Lindbergh wrote a new chapter in fashion history, they were not the first, nor the last, designer-photographer double act to strike a symbiosis – the relationship between the two disciplines is, at times, wholly interdependent. After all, designers rely on photographers to decode and translate their vision, humanising collections within much wider visual narratives. Below, we take a look at the past, present, and future of fashion photography, as told through the most iconic of its pairings.

Order your copy of the book here.