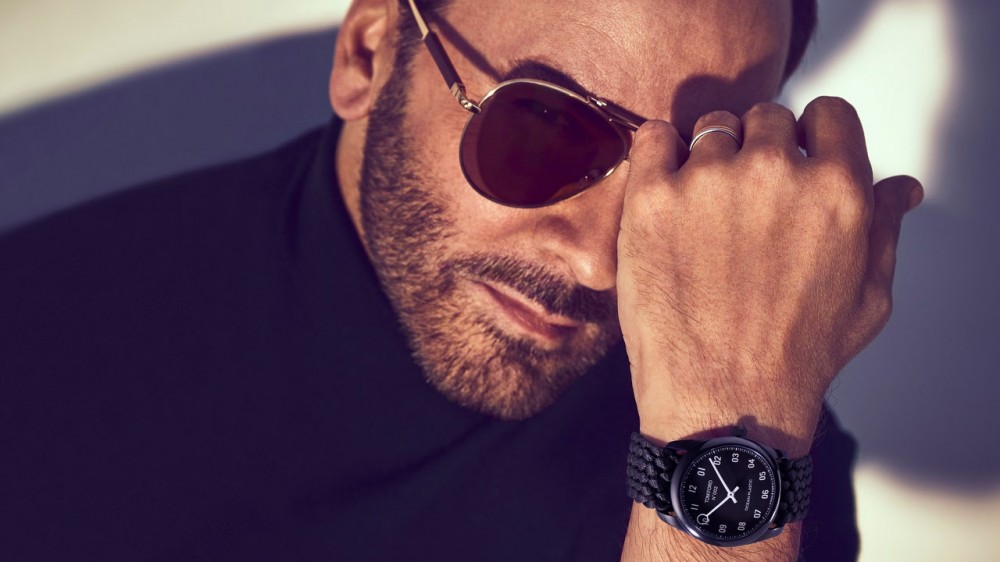 The statistics are truly alarming. Nearly 9 million tons of plastic enter the oceans each year, the equivalent of dumping a garbage truck full of the stuff into the seas every minute. By 2050, there will be more plastic in the oceans than fish. “It’s one of the greatest issues facing us: polluting the oceans,” says Tom Ford. “If they die we’re in big trouble.” So the designer is taking action. Today, he’s releasing a new watch made from 100% ocean plastic, and he’s also announcing the Tom Ford Plastic Innovation Prize. A $1 million award will go to the innovator who designs a scalable replacement for thin-film plastic—the stuff polybags are made of. The numbers on those are even more startling; somewhere between 1 and 5 trillion are used and instantly discarded each year.

Ford remembers how he got turned on to the problem of single-use plastic. It was about five years ago, when he saw the actor Adrian Grenier talking about straws on TV. “I remember thinking, This is silly. What’s a straw? But then I thought, Oh, that makes a lot of sense: They’re a problem and they’re something we can cut out,” Ford says. First he switched to metal straws for his morning coffees (he drinks two or three), and from there he swapped plastic Evian bottles for glass bottles. “I told everyone at home and everyone at the office we’re getting rid of all single-use plastic. It all went off from seeing Adrian talk about straws.”

Now Ford has partnered with Grenier and 52HZ, the advisory arm of Lonely Whale, an organization the actor founded in 2015 with Lucy Sumner to positively impact the health of the oceans, on the Tom Ford Plastic Innovation Prize. It’s a five-year commitment. A winner will be chosen in 2022, and by 2025, the plan is to bring the product to market. “It has to be scalable, a real, actual solution that can be manufactured and produced; that’s a big part of it,” Ford says. “It’s been an education process for me, but I’m so excited about finding an alternative to a polybag.” Fashion, of course, relies on polybags to ship merchandise safely from factories to sales floors and from warehouses to homes, but the applications for this hypothetical alternative extend well beyond Ford’s own industry. “Every single thing you buy is packaged, single-use plastic,” Ford says. “It’s endless. And once your brain is keyed into that, you see it everywhere.”

The ugly truth is that recycling isn’t a long-term solution. There simply aren’t enough end uses for recycled plastic, and so rather than going to recycling facilities, much of it ends up in landfills and water sources that lead to the oceans. Ideally, we’d stop that cycle before plastics end up there—thus, the Innovation Prize. In the meantime, there’s the Tom Ford Ocean Plastic watch. Each one removes the equivalent of 35 bottles of plastic waste from the ocean. When he sells 1,000 watches that’s approximately 490 pounds of plastic waste.

And Ford sees this watch as the first of many he makes from ocean plastic. “I suppose it feels like plastic, if you know,” the designer says. “But it doesn’t feel like a compromise. It’s incredibly durable. It’s beautifully made. And it says ‘ocean plastic’ on it. You see it on your arm and you think, Wow, you can make great things out of ocean plastic.”

His customers are more aware of sustainability than ever, he says, but there are caveats. “They’re not going to buy it just because it’s more sustainable, and to be honest they’re not going to not buy it because it’s not sustainable. The thing about what I do: It’s not disposable. We’re producing products that are meant to last—products that if you manage to keep your figure you can wear your entire life, or give to someone else, your daughter, your son, or you sell them on 1stDibs for sometimes more than you paid for them. I think that’s the most ethical thing about what I do.”

Profound, “change the course of earth’s history” change will require the involvement of governments, like the sweeping single-use plastic ban Canada’s prime minister Justin Trudeau announced last month. “We’re a capitalist culture,” Ford says. “You put up a hurdle like that and you have innovation, and so that is going to be the ultimate thing that pushes us: changing laws.” But until then, Ford is proud of his ocean watch. “As far as I know it’s the first luxury timepiece made from ocean plastic. It’s inventive and I’m really proud of it,” he says. “It’s like a straw—it’s a start.”