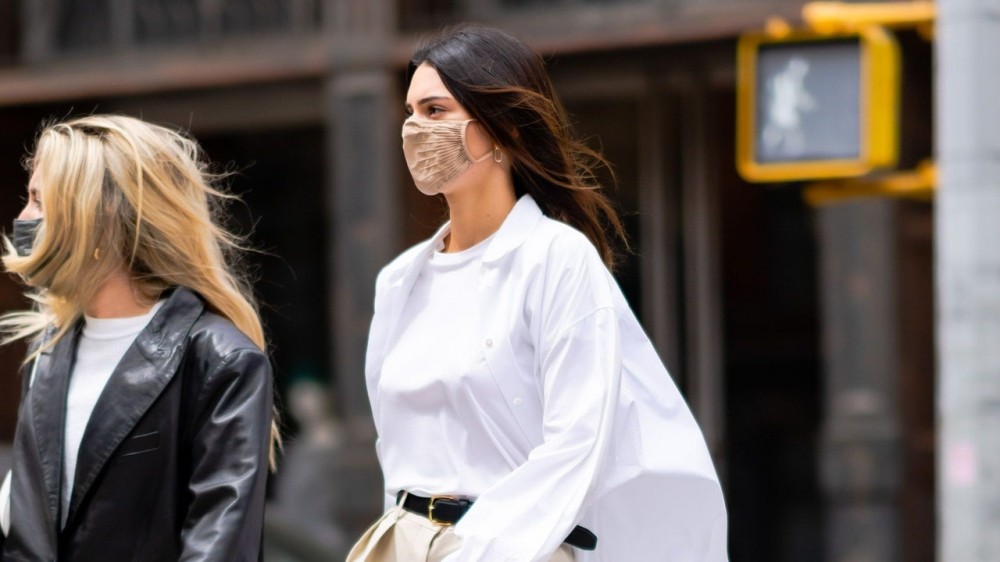 Yesterday was a big day for The Row. First, Jonah Hill, hirsute fit god to all, wore a head-to-toe black look. From afar, the sweater, the pants, and the shoes could have been by any label producing quality basics but instead, it was by The Row. “Modeling is emotionally complex @zoeisabellakravitz @therow,” he said in his caption. The luminous Kravtiz also reposted the Instagram with a @therow tag in between the duo. If they’re working with the brand on a secret project—as many have speculated—then she must be wearing The Row too, but I couldn’t quite tell. My The Row savant friends wrote back either “hm” or “I think so.” One noted that “haha i mean so hard.. it looks like it but could almost be anyone, but the length is giving me the row,” while also adding, “honestly looks like a skirt i have from aritzia”. One email to the brand confirmed that she was, indeed, wearing their clothes. But not being entirely sure was very on-brand.

Shortly after Hill and Kravitz’s post, Kendall Jenner joined the trend. She wore a white shirt, a T-shirt, a thin leather belt, and a pair of high-waisted pleated trousers with a pair of thong kitten heels and captioned it “head-to-toe pt. 2.” Part one was back in November, when Jenner wore an all-black get-up and captioned it once again “the row head toe.”

The infusion of The Row in celebrity looks feels like a reckoning in the world of megawatt street style. It’s not that celebs are just discovering the label, more that it’s now making headlines and being worn by more frequently paparazzied celebs. Hill has long been praised for his love for tie-dye and bucket hats, but has been a quiet fan of The Row for years. Jenner hasn’t always been as flamboyant as Hill, but she’s been known to step out in strappy, slinky dresses and Y2K-minded tube tops. Her style has become sleekified after beginning to work with stylist Dani Michelle, who also elevated sister Kourtney Kardashian’s look. Back in February, Chrissy Teigen, who loves floral print dresses, posted a photo of herself next to a painting in a black coat, a white turtleneck, black mules, and a hulking mahogany brown bag. That carryall was tagged “The Row,” and acted as the anchor to this “I mean business” ensemble. (She’s also worn several of their totes going back to 2016).

Of course, anyone, regardless of their personal style, can wear a pair of black slacks and a matching sweater if they so please. But The Row has always been a label that has simultaneously managed to avoid hype while also remaining the obsession of the fashion and art crowd. The visuals don’t attract attention, but the name does. It’s expensive, quality-minded, and created by the elusive Olsen twins. Think of it as the “speak softly and carry a big stick” of fashion, which often acts against things like Instagram tags. Yet, here we are.

Sure, the concept is curious—the whisper-of-wealth label tagged on the biggest of stars—but it is also a visual palette cleanser. After all, celebs generally clamor for the biggest and brightest, the most underground, the most recently released items that are bound to make a visual impact. That can feel exhausting, and the concept repetitive. We’ve seen Kim Kardashian—one of the reigning queens of street style—in unreleased Yeezys and a healthy rotation of Birkin bags. Bella Hadid with logo bags and bodysuits. We’ve seen it all on these stars, except, well, minimalism courtesy of The Row.

For Michelle and Jenner, the choice of minimalism has become a repose. “Kendall and I always chat about a vibe before fittings, what her vision is, then I pull the pieces to bring it to life. Once together, we collaborate on ideas to make the final look because it all stems from her vision,” says Michelle. “Right now, she’s gravitating towards a minimal style, and The Row was one of the ways we executed it.” Michelle continues: “As a stylist, we do research from Los Angeles to Japan to find new brands, smaller labels, young designers, and incorporate all the elements to create a vision,” she says. “The Row is a club that has it all in one place, if they choose to let you in. In a time of funky, street, and vintage, it’s refreshing to be timeless, sophisticated, and minimal.” Though, while anyone can put together a minimal outfit, not everyone can include pieces from The Row, whose prices are awfully high. Besides, “if you know, you know” is an amazingly powerful style choice.