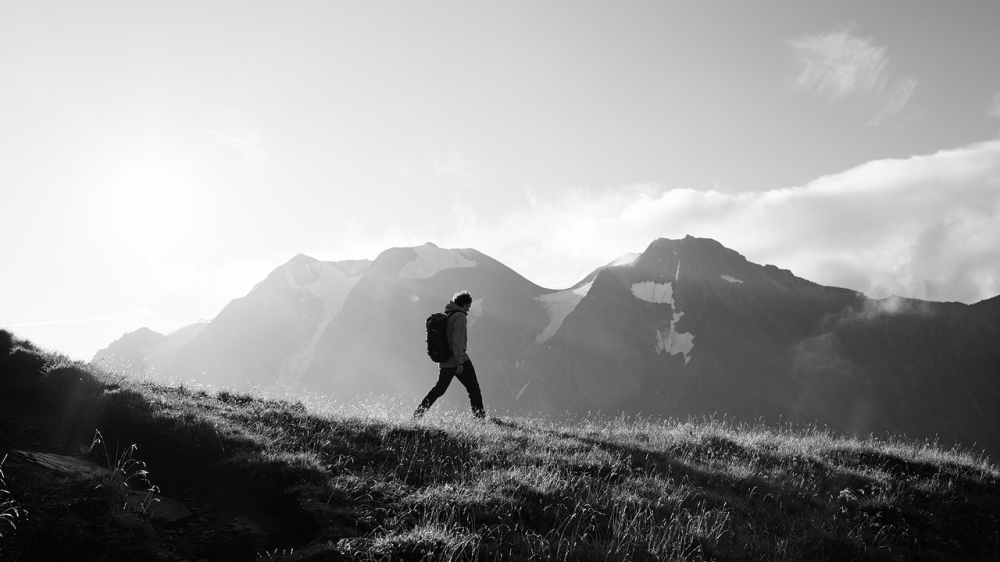 I am recently a self-care skeptic turned believer. It’s been a 180-degree mental flip that took a quarantine to inspire, more specifically a life-saving routine of daily yoga, Instagram fasting, and the escapist fantasy of the Nintendo game Animal Crossing, all of which kept me sane while stuck at home. It’s not that I hadn’t thought it was important to take care of myself, or that I never partook in any number of practices that could be seen as woo-woo wellness. It’s just that, until the urgent flood of worldwide panic, I’d yet to see up close how vividly a downward dog can change your day, or felt the peaceful receding of existential dread while in pose, my unease washed away by a vinyasa flow.

And so, when my favorite outdoors brand Arc’teryx asked me to join them on a nature excursion, part of their new Outer Peace initiative dedicated to promoting the healing power of being outside, I was receptive to, if still a little unconvinced by, the notion that a few hours amongst the trees could cure my considerable lingering restlessness. While I am an urban New York creature, at home on streets and subways, I do have a powerful if amateur taste for wide open spaces. I’d probably not be the first to pitch a tent to camp in the woods sans running water, but I spend as much time as I can hiking and swimming. Would taking it up a notch—not only spending more time outside, but, as Arc’teryx recommends with Outer Peace, being purposeful and deliberate once there—be a recipe for a weller me? Based on the proposition that the outdoors can substantially improve lives, Arc’teryx is giving $1 million this year to organizations like Big City Mountaineers and Brown Girl Outdoor World, to help “remove barriers and protect nature, so people who have been traditionally excluded from access to nature may find Outer Peace.” With their invitation to join them on a few days in the great green, brown, and blue of wilderness, I would get to test their theory first-hand.

The science, as I learned from the writer Florence Williams, whose book The Nature Fix partly motivated the Outer Peace program, backs up the Arc’teryx idea that any time in nature, even just minutes, can lower blood pressure, improve mood, and help keep depression and anxiety at bay. “The first place I went [to research] was Japan, a really stressed out country. I watched them do the science—physiologists were measuring people’s blood pressure, stress hormones, heart rates, and respiration after just a 15-minute walk in the woods. And these biomarkers really improve,” she says. Williams attributes these organic gains in part to the concept of biophilia or, as she puts it, “the idea that we are innately wired to love living things.” “We are animals who evolved in nature, and our perceptual systems, the way we read an environment, is based on natural landscapes. We understand on a subconscious level that a river means we can find clean water,” she says. “There’s something subconscious that our brain aligns with when it’s interpreting a natural landscape, as opposed to a city intersection, which we can navigate but at a cost. It’s stressful!”

I set out to leave those stressful intersections behind, at least for a weekend. Arc’teryx is from Vancouver—just “10 minutes from wilderness,” as the company’s George Weetman told me—where the magnificence of nature is impossible to miss. Though they now make all kinds of minimalist and tasteful gear (my personal style hero Frank Ocean is a fan) for any level of outdoors experience, from expert to novice, they were born back in 1989 primarily as a climbing company, and so for day 1 of the Outer Peace experience, we went up to the rocky Mohonk Preserve about 90 miles upstate from Manhattan. The preserve is around 8,000 acres of forests, clifts, and streams, and a big destination for rock climbers, with about 50,000 climbers each year who check out the 1,000 climbing routes.

Once there, I paired up with a guide named Dustin Portzline, who leads private tours of the preserve and teaches people to climb. He himself is an extensive climber, and even free solos, meaning he climbs without ropes, harnesses, or any protective equipment. The very notion of hanging 200 feet in the air from your fingers without a safety net seems almost unreal to me, but Portzline sounds calmly centered about the death-defying sport. “There’s this idea from the legendary climber Fred Beckey, who was doing ascents in the ’40s. He used no harnesses, no boots, and would spend the night on the mountain,” Portzline says. “He’d wake up in the morning all the way up there and see the sky change from dark to sunshine. And it showed him how life can switch, and he thought that in order to get the most in life, people should explore its contrasts.”

We trekked through rocks and narrow passages tricky enough that total concentration was required, passing by climbers 100 feet up a rope trying to get to the top of various cliffs. “I like Facebook but it doesn’t check every box,” Portzline says. “Living outdoors is more conducive to building community. I think it’s an important part of life, getting exercise and struggling and sweating and relaxing and observing.” The hike featured all of those feelings, both beautiful and tiring, and I felt rewarded and grateful as it wound down, proud of a day well spent. I ended with a trip to the visitor’s center to buy some solid park merch (perhaps it’s not meditative or spiritually sound to say, but one trick I can bring to the outdoors experience is to always check out the merchandise) and a two-hour ride back to the city.

The next day was wholly different and completely revelatory—and it didn’t involve even leaving my area code. I visited Van Cortlandt Park, an urban park in the Bronx that’s the third largest in New York City. I had never been, which already made it fresh, and with the ideas of Outer Peace in my head, I approached its winding trails and enclaves in the trees with a different perspective. After almost 15 years in the city, I’ve come to see New York’s incredible parks almost as manicured and lovely thoroughfares, often taking for granted the small earth-bound details that make each one its own splendor of flora and fauna, but here I had my eyes attuned to Van Cortlandt as though it were a Patagonian tundra. And it paid off.

It was a misty morning, which gave the park an otherworldly glow. I noticed a field of ducks quacking and saw them as wild animals instead of how I normally do city wildlife (at best an urban curiosity and at worst an urban nuisance). I could still see cars lining the Saw Mill River Parkway on the edge of the park, but I also saw birds’ nests in trees, something I’d never noticed in the city. No airpods in, I heard the sound of water rushing from a small waterfall. I allowed myself to get lost on a series of woodsy trails and found myself in one of the most unlikely places I’d ever imagined in New York: a small marshy wetlands within the park called Tibbetts, accessible by a wooden boardwalk that crosses the bog. I was overwhelmed by the movement and sound of small birds criss-crossing and cooing between a canopy of trees. Before I knew it, a couple hours had passed and I was a bit disoriented, altogether happy that I had gotten lost in a city where I thought I knew every crevice.

On my way back downtown from the Bronx, the skyscrapers getting taller and the traffic getting worse, I did notice a certain calm in my bones, with the added physical pleasure of having worked my legs to the point of satisfied fatigue. Once home, the warmth of a cramped New York apartment, the same apartment that has come to feel like a cage at times in the pandemic, never seemed as grand as when I’d spent the entire day in the cold. I did not have the tools to measure blood pressure or heart rate to see if my time at Van Cortlandt and Mohonk had turned Outer Peace into inner peace, but I felt at ease, happy to eat food that nourished my body and excited to be in bed to rest my weary limbs.

But, over time, I also noticed something I didn’t quite expect, which the Outer Peace program also helped me see. A few days later, I went on a more casual hike upstate with a couple of friends. It was a grey day and the path was muddy; I foolishly wore slippery white sneakers because I had forgotten hiking boots and it was cold enough that just about 30 minutes was enough for us. We walked through columns of tall yellow grass, talking about the everyday things we always talk about. I had the Arc’teryx mentality in my brain, though, inspired to at least try to be in the moment and notice the world around me. And I did: not just the mighty evergreens and pools of placid water, but the people who were there to experience it with me.

It is a privilege to be in nature, maybe even enough of one that it can help us be happy and whole. There is surely transcendence in the trees. But I also found that appreciation is exponential. Appreciating nature helped me appreciate everything else, and what became crystal clear to me after a long mindful weekend in the dirt, both with people and without, is that however majestic the setting, it’s all even better in the moments—now rare and precious in a time of social distancing—when you can see it with those you love.