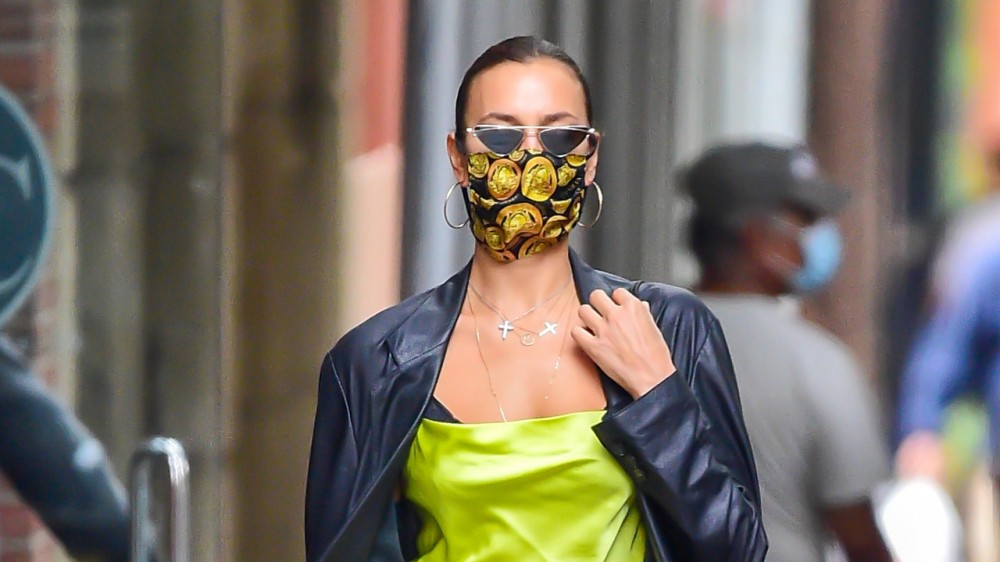 Like many non-models, I’m currently living in sweatpants and hoodies, swapping one set of loungewear out for the next. But once I start to click through the paparazzi newswires on my phone and look at the celebrities stepping out, I get inspired. Consistently, there’s one friendly hot face who makes me want to throw on a crop top and seize the day—Irina Shayk. The supermodel makes me want to wear jeans so tight they need to be peeled off, and a spindly stiletto that is bound to grate away at the flesh on the back of my foot.

I love the model (and mother’s) looks. There is an unabashed hotness about Shayk and in the way she wears clothes, which is weirdly comforting. No matter what’s going on in the world, she is still taking major strides to dress up—mask and all! Some of those masked looks are downright smoldering, too, like back in early October when she wore a clingy yellow tank and slip skirt with strappy sandals or a red hot midriff-baring crop top and leggings mix later in November.

What sets Shayk apart from other street style sirens, like Bella Hadid, Dua Lipa, or Emily Ratajkowski, is that she’s not clamoring to wear the next archival item or buzzy designer, and honestly, probably doesn’t care, which in turn is a bit refreshing. Being detached can be really cool, and I feel that oh-so-much with Shayk! Plus, aside from Shayk’s perfectly symmetrical features, she holds a certain confidence while wearing her most odd outfit combinations, which happen to be the most entertaining. In one instance during November, she stepped out in a long leather trench coat, a black bustier, a tiny zebra print bag, and a pair of button-fly Chrome Hearts jeans that were stuffed into a pair of knee-skimming combat boots. A few days later, she stepped out in a full velour slate gray sweatsuit, now with a zebra mask to match her zebra bag, now with her sweats in a pair of heeled boots. Jeans tucked into boots has long been a tricky look to pull off, but sweats crammed into boots? It’s one of those bizarre-o mash-ups that works, partially because it is a great and unlikely styling moment, and also because Shayk wears each look with an unforgiving confidence.

The showy style feels like a far cry from the Russian supermodel’s overall look when she was dating Bradley Cooper for four years during 2015-2019. (The pair officially broke up in June of 2019.) During that time, Shayk’s stepping-out get-ups felt constricted. Think: lots of turtlenecks, long dresses, and innocent-cute dresses. (Save for the red carpet appearances, which were fully flesh-forward.) Seeing those muted looks on the street juxtaposed with her showy numbers on the red carpet felt jarring, and belied Shayk’s street style potential.

Fast forward, it feels as if the mother, now single, is letting herself out to be seen. She’s going for it in short zip-up dresses and combat boots, or a full swishy tracksuit with heels. Her confidence radiates to all times of day, even when she is dropping and picking her daughter up from school, in which my favorite accessory of Shayk’s appears: Her daughter’s pink backpack. The adorable plastic carryall is a shade blinding pink and ice blue with the image of Minnie Mouse plastered on the front. Shayk totes the bright fuchsia beacon as if it were an it-bag.

Who knows when we’ll stop wearing masks and start wearing actual clothes from the waist down. But Shayk makes me want to try again. She makes dressing up feel interesting and experimental instead of compulsory or pointless. She even appears to be finding her style during this stilted time. Maybe in the near future Shayk will get me out of sweatpants, or at least get me to tuck them into some heeled boots.