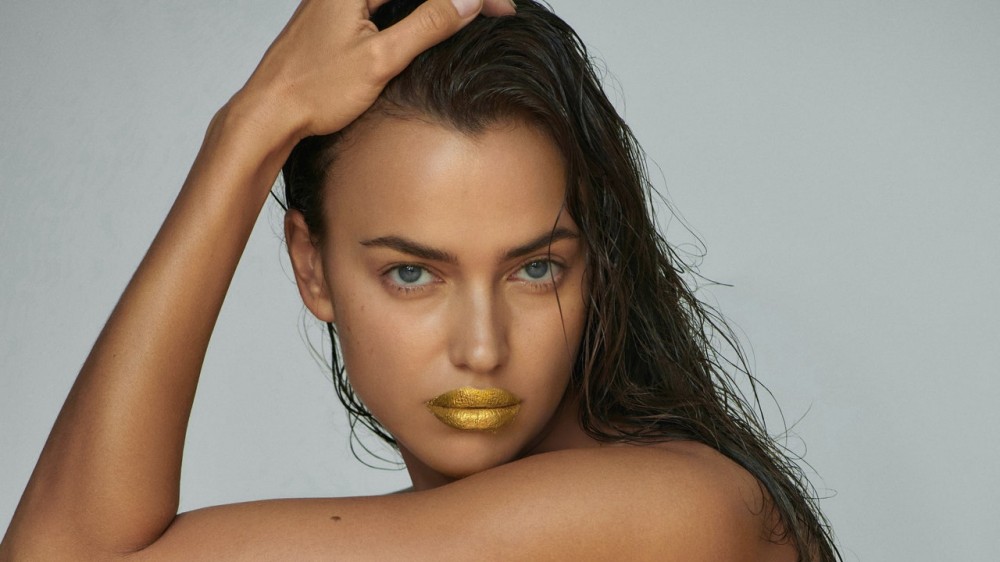 Irina Shayk has been glowing this year. The Russian supermodel has been radiant in each of her paparazzi photos, perfectly coiffed and dressed. With much of her day-to-day modeling routine on pause, Shayk has more time to focus on herself, her style, and her skincare. For someone so oft-photographed, her getting-ready routine is relatively simple and quick, since she has to get her daughter ready for school as well. First Shayk washes her face with cold water, and then takes an ice cube and rubs it on her face. “It wakes me up,” she tells Vogue over the phone. She then uses eye cream and face cream, which she rubs into her neck.

The most lavish and recent addition to her pared-back beauty routine has been courtesy of Mimi Luzon, an aesthetician to the stars, who is known for her 24k gold masks that give the skin a Midas-like glow. Shayk has collaborated with Luzon for a version of the mask specially for the lips, made of, yes, 24k gold. The two had met a few years ago when Shayk had a bad allergic reaction at a festival and her friend recommended she go to Luzon for treatment. Slowly, the two became friends. Shayk had long gravitated towards Luzon’s lip kits as a cure for her often-dry lips. Eventually, she collaborated with Luzon. “Mimi was like, ‘You’re obsessed with lip stuff. Let’s create something together. That’s how the idea was born, a 24 karat gold leaf treatment for your lips that leaves them moisturized.”

The road to such a luxury treatment has been a long time in the making for Shayk, who would use an array of oddball creams and oils on her face when she resided in the small southwestern town of Yemanzhelinsk, Russia. “I didn’t start to use creams and stuff until I was like 19 or 20 and I started to work as a model. Before we didn’t really have access to the creams and stuff. We’d use stuff from the refrigerators, like a cucumber mask for moisturizing or something,” she says. “I remember my mother was cooking with coconut oil and putting it on her skin as well. She was using whatever she was cooking with.”

While Shayk has been putting more time into her beauty routine, she’s also been elevating her street style look. Before the pandemic, Shayk wouldn’t necessarily dress up to go outside. “In my normal life, I never got dressed up because for me, it was all about comfort,” she says. Though, it was during lockdown she was yearning to have more fun with her clothes, even during routine moments, like when she drops her daughter off at school. “Before we used to go to big events and parties with the makeup and get dressed up,” she says. “Now, I think I miss those fun moments, so I decided that I can have fun with a street style.”It’s equally fun to watch her street style looks, which can be downright smoldering: she’s worn a gray velour sweatsuit with matching heeled boots (accessorized with a zebra mask and matching baguette bag) as well as a biker chic look with a black moto jacket and leather pants, sweetened up by her daughter’s lunch bag she was carrying at the moment.

To remix her look, Shayk has been taking time to explore her closet and experiment with brighter color palettes. “I had so many different pieces sitting in my closet from years ago,” she says. “When I didn’t know what to wear, I’d wear something that simple and black. Now, I figured it is time to use a splash of color in my wardrobe….When you put on some color, it just brings your mood to a different level.” While we love her lime green silk set she wore back in October, you can’t beat a touch of 24k gold on the lips. Shayk is golden every time she steps out.