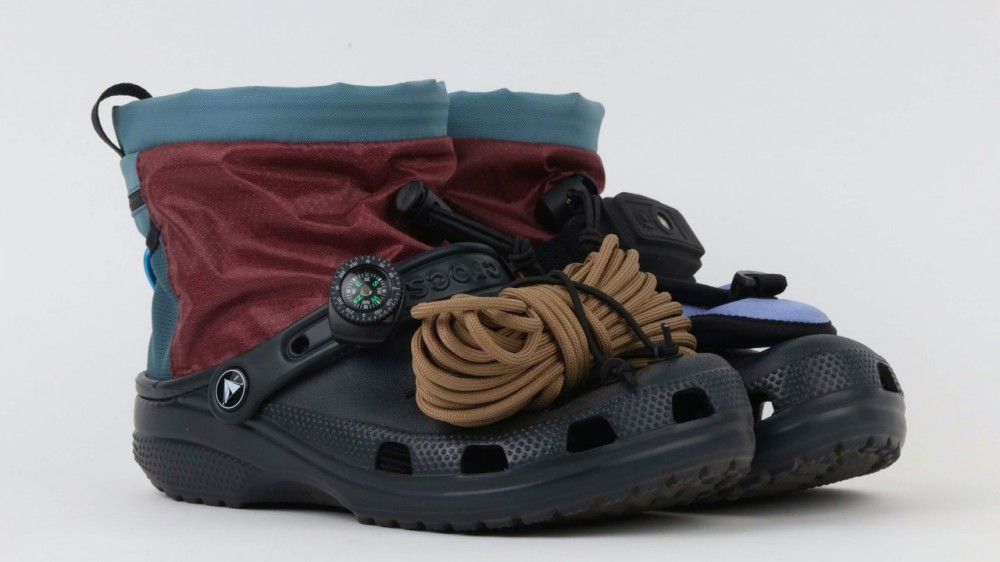 There’s a new Croc in town. It’s not from Post Malone or Justin Bieber, and yet it is also sold out. This Croc incarnation comes with wonky, clever, rock-climbing-themed jibbitz (Croc-speak for embellishments). On one shoe, a piece of rope is fastened by a bungee, and on another, there is a little, tiny pouch with a compass on it, which can later be affixed to the Croc’s rubber strap. Here, the bungee cord could be used to fasten most anything, not just rope, onto the shoe. The concept was created by DIY artist and footwear-design enthusiast Nicole McLaughlin. “That [functionality] is kind of the aesthetic of all my pieces. Like, ‘How far can you push the limit?’ Sometimes it’s just for fun, to poke fun at fashion, like putting a bunch of pockets on something when it doesn’t really need it,” says McLaughlin over Zoom. “But like, it does have a functionality and it does have a purpose.” Whether or not people are utilizing those functionalities, the look has been red hot since she released it last week. John Mayer, a bona fide god in the world of chill-fit bros, posted a pair, and the shoe is currently sold out on the Crocs website.

McLaughlin has long been a bit of a celebrity in the Instagram design world since about 2017. The former Reebok sneaker designer got her viral start after she created slippers out of volleyballs and Carhartt scraps. “My Instagram is my brain exploded,” says McLaughlin. The images spread quickly. The shoes were the sort of off-kilter, made-you-look creations that rack up thousands of likes and adoring comments. Slowly, McLaughlin began to venture further into the more absurdist world of DIY creations, churning out clothing and furniture. Some of her most popular pieces are bras with cups fashioned out of lemon juicers that are, yes, fully functional; vests made from packages of air fresheners; folding chairs from slices of Arcteryx garb; and even a pump with a golf club head as the heel. In one Instagram video, McLaughlin successfully hits a golf ball with her heel.

While the creations often leave the viewer questioning why, people nonetheless ask McLaughlin how to buy them. “I’d get a lot of requests, or they’ll just send me their size and be like, ‘Oh, here’s my shipping address,’” says McLaughlin. Prior to Crocs, McLaughlin had never officially produced pieces but rather had made one-off items. The collaboration with Crocs came at the perfect time. A year ago, McLaughlin joined Foot Locker’s incubator program, Greenhouse, a way to connect consumers with up-and-coming designers, which facilitated the collaboration with Crocs. “It was a dream because, naturally, the shape that I always use is like a slipper or a house-shoe clog,” she says. For the collaboration, McLaughlin focused on making the shoe a bit more interactive. “There were options for a safer route, but I was like, ‘How far could I push Crocs to create something that’s my vision with their technical features?’” McLaughlin, who describes herself as outdoorsy, made rock-climbing- and camping-themed Crocs. In addition to storage pockets and bungee cords, the Crocs also come with sock-like booties made from chalk bags that have a pouch in the back. “The wearer can customize it even further and put a candy bar or something under the bungee cord instead of the rope,” she says.

McLaughlin is not alone in the world of shoes having purposes besides walking. Similar multifunctional concepts have been slowly appearing in the footwear world. In recent years, Nike has churned out sandals with fanny packs, and Vivienne Westwood’s Asics collaboration has a mesh storage unit. The concept falls right into McLaughlin’s philosophy of making items have a functional dual purpose. “I’m starting to see functionality become hyper-functionality within shoes, which I love,” she says. And here, the absurdity of some of the designs is to ultimately inspire. “I want to be able to make something that inspires other designers and brands to go out there and use that as like a little bit of a pie-in-the-sky inspiration.”