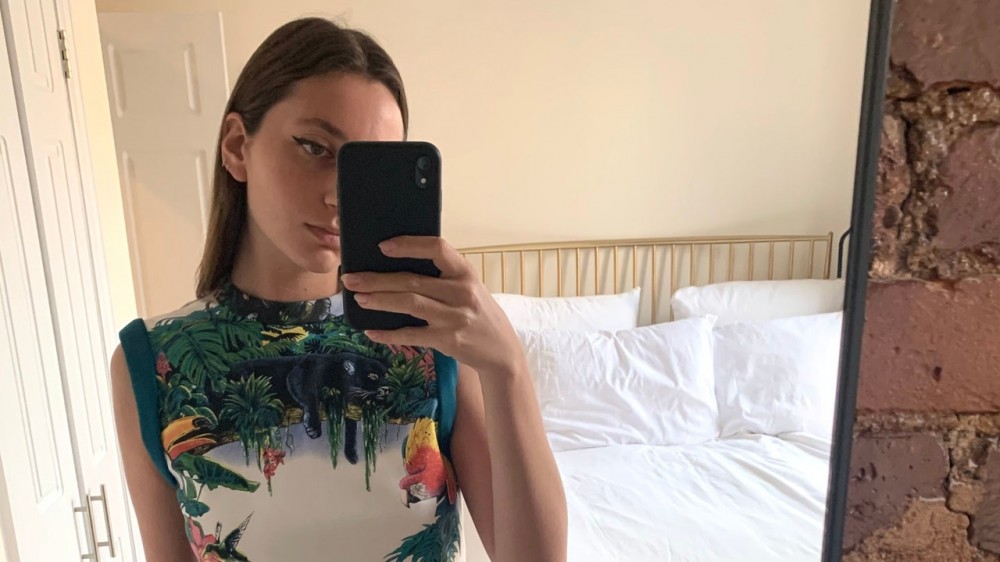 Eden Pritikin can remember the exact piece of clothing that threw her world off its axis: A jungle print scuba top from Balenciaga’s Spring 2003 collection, designed by Nicolas Ghesquière. “I remember seeing a runway picture of it for the first time and after that, everything I saw was measured up to the emotional reaction that the scuba top sparked for me,” she says. That top started Pritikin’s love of early 2000s Balenciaga, which has since culminated in her archival collection that hovers around 115 pieces of the “best of the best. Only runway.”

23-year-old Pritikin is specific with her accumulation of Balenciaga pieces, and mainly collects looks from 2000 – 2004, though she wasn’t even 10 years old when they originally walked the runway. “They were the golden years before things started to get commercialized,” she notes. Currently, Pritikin is obsessed with cargo pieces from Spring 2002, and scoring the heavy-shouldered finale looks from Fall 2000. “The jumbled mess of those finale tops are so beautiful,” she says. “I would die to have one.”

Pritikin, because of the scale and specificity of her collection, is a bit of a micro-celebrity in the world of Instagram archival collectors. Her account @e.archive is modest at under 450 followers, which includes friends and fellow collectors. According to Pritikin, the majority of her followers are, “people who I assume love Balenciaga.” She began her collection years after her teenage discovery of the scuba top, when she was at London College of Fashion and visiting New York on a spontaneous work trip. “It is the scuba top from look 1 of spring 2003, worn by Erin Wasson, and is new minus the tags,” she says, “I remember finding it and it was my first time seeing a piece of this caliber in person. And I got so emotional when I found it that I was almost in tears.”

In college, Pritikin began to work at a fashion casting company during fashion month. There, she began to save up money to buy more Balenciaga. At first, she began to collect non-runway, more commercial pieces. Pritikin’s attitude changed, and she started to curate her collection more and sought out more collectible pieces. “I have to think about the future of my collection and what is going to happen with it. I’m not going to hold onto it forever, so in my head, I am thinking about what is most attractive to a museum or an archive.” To scout for pieces, Pritikin estimates that she spends two to three hours a day trawling resale websites for items to purchase. For items she doesn’t wear, she resells them. “These pieces don’t hold any value sitting in my closet. So it makes sense for me to sell them,” says Pritikin.

Over the years, Pritikin has found a trove of uber-rare items. Most recently, she was with a friend at lunch in New York and had shown them a listing for a Spring 2003 scuba dress that was “priced at a ton of money.” After, they had planned to go uptown, and while en route, she stopped by a local consignment store in Nolita and saw the dress hanging. “I really think it was some sign from the universe that I was meant to own that dress. It was just sitting on the rack,” she says. Her Balenciaga-loving followers have had a hand in her finding some of her favorite pieces, including a chunky knit cream scarf from Fall 2002. A few years ago, a follower on Instagram sent Pritikin a link to a consignment store in Montreal that was selling the scarf. “I was on the phone all day with the store to see if they would send the scarf to the United States,” she says. The scarf, among other items from the collection, has a handwritten number inscribed on an extra tag to show how many were produced.

Pritikin’s love for Balenciaga is anchored in fantasy, tied into the clothing construction and the perspective of Ghesquière. “Nicolas was always so vocal about the character that he was creating with each collection. He always made it clear that they were sort of continuations from each other from spring and summer to fall and winter, back to spring and summer,” she says. “There’s the coolness factor, too, because it was so French. It was so Parisian. Chloë Sevigny and Charlotte Gainsbourg were wearing the clothes. It’s like, ‘I want to be like them.’ They’re these It-girls. They have the ultimate persona of who I want to be. If I wear Balenciaga, maybe I can just accomplish or accomplished even just a sliver of that?’”

Ghesquière-era Balenciaga does not have the hype compared to the current celebrity craze for Tom Ford-era Gucci, the mass recognizability of Jean Paul Gaultier’s mesh prints, or Helmut Lang’s large followings. But according to Pritikin, it will get there eventually. “Balenciaga hasn’t reached that stage yet. I’m early to the cult. It is hard to think about because Ghesquière is at Louis Vuitton now, and he still has his whole career ahead of him,” she says. “In a sense, Balenciaga is sort of the forgotten child that is going to take some time for people to remember how incredible it was.” Luckily, Pritikin has a head start.