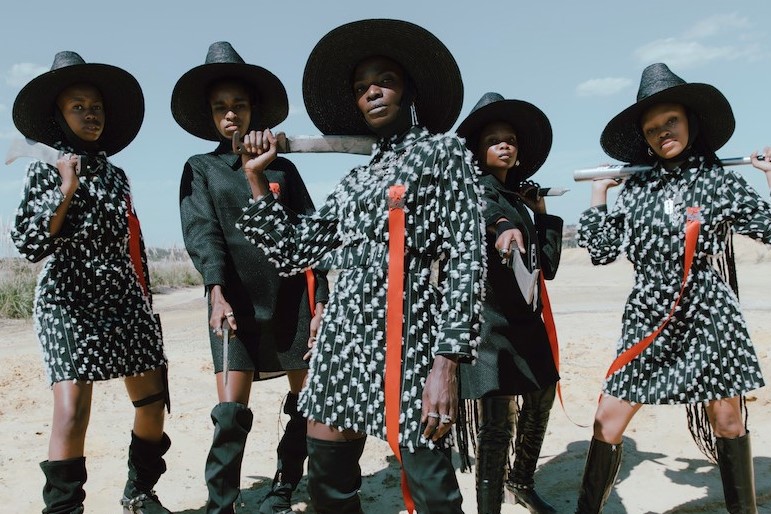 The South African designer joined forces with Kristin-Lee Moolman on a short film for AW21 – now, a new documentary by Francesco Mbele reveals the challenges they faced behind the scenes

Against the backdrop of a stark, blue sky, two hummingbirds fly in tandem as an ominous sound erupts in the background. The scene then shifts dramatically, and we’re in the middle of a lake. There, a baptism of sorts is playing out, as a dark-skinned woman, resplendent in a flowing white gown, stands over another. Submerged to the chin in the lake’s calm waters, the second woman looks up in anticipation of a blessing, which the woman in white offers by placing her thumb to the middle of her forehead.

This moment, imbued with meaning and ritual, marks the beginning of Thebe Magugu’s new film Banyoloyi A Bosigo (Ultimate Midnite Angels). As an extension of the designer’s AW21 collection Alchemy, Banyoli A Bosigo tells the story of queer love between two “bad-ass female characters” from separate, feuding tribes. With styling and set design by Chloe Andrea Welgemoed, the film is directed by South African photographer and filmmaker Kristin-Lee Moolman and incorporates the nostalgic cinematography and subtle humour she’s become known for. Meanwhile, the brilliant collection its stars wear further cements Magugu’s status as a rising talent it would be unwise to take your eyes off.

Now, a few weeks after he dropped his AW21 collection and film, Magugu is debuting a short documentary that goes behind the scenes of Banyoli A Bosigo. Directed by Francesco Mbele, a 20-year-old South African photographer, the doc offers a compelling glimpse into how the project came to life. Despite the finished film’s slick visuals, the production wasn’t without its hurdles, with Magugu revealing a series of misfortunes surrounding the shoot. “A group of men stole a car where I had the entire collection – the shoes, everything – the evening before the first day of shooting,” he reveals. Thankfully, he managed to get the clothes back in time to go ahead, but the boots he had created specifically for the offering – his first foray into footwear – were long gone.

Ahead of the documentary’s release, we spoke with Magugu, Moolman, and Mbele about Banyoli A Bosigo and the part they each played in the project.

Hello everyone, where are you all speaking from?

Thebe Magugu: We are all in Joburg. And just miraculously being here at the same time made working together easier in these crazy times.

Amazing! So first of all, Kristin-Lee – can you please walk me through the film and your inspiration?

Kristin-Lee Moolman: The starting off point was of course Thebe’s collection around African spirituality, but soon it became a film about bad-ass female characters in a very ambiguous context. I feel like female characters are traditionally allowed to be the mother, the whore, the noble warrior, or some villain who ends up being pathetic – there are never really female characters with true depth. I also wanted to write about a group of badass women who haven’t undergone some sort of trauma to get where they are, which is how most films are. I wanted these women to have the luxury of just being.

Why was it important to explore queerness in the film, and how does this relate to the collection itself?

Kristin-Lee Moolman: Many parts of the film interact with the theme of the collection and one of the ways it does that is through the ways women are portrayed with complexity and strength – I didn’t want the fact that they are queer to be the narrative or to be their downfall. I also wanted to normalise the same-sex relationship in the film away from the gaze of typical queer films where they have to go through trauma and are not allowed to just be strong characters like everybody else.

Francesco, what did it mean to document the process behind the making of this film?

Francesco Mbele: I think it is important to tell the story behind the story. This film is quite a monumental work and at the back of my mind, I wanted to make a tease out what went into it, and what it meant to create a work like this for a global audience.

Kristin-Lee Moolman: And I just want to add that none of the girls in the film had ever acted before.

Francesco Mbele: Yeah, and it was great to be able to capture them as they stepped into the unknown, a new creative sphere with this film.

Thebe Magugu: To also add to what Fran has said, I think people just see the finished product of the film and are unaware of the drama, all the things that went wrong and could have gone wrong in the making of this work. And I think it was a really good decision to have someone document us just going about trying to make this finished product happen.

You talk about the theft that happened – what else went wrong?

Kristin-Lee Moolman: Like, I mean from people getting hijacked and shot the day before filming, to a cyclone hitting the coast and affecting the weather all over the country, particularly where the filming location was.

Thebe Magugu: Along with the theft (of the car the collection was in) we also had to shift the shooting for a few days because of the severe weather. So because we – Kristin especially – wanted the perfect weather to enhance the film, we had to wait. We wouldn’t have been able to get the film’s beautiful tone so we literally finished the film two hours before it had to go up.

Let’s talk a bit more about the collection, can you go into a little more depth on its themes and inspirations Thebe?

Thebe Magugu: Along with African spirituality, the idea of the collection was also about using everything around you, creating naturally. In South Africa, eco-printmaker Larisa Don created botanical transfers by plant-pounding cannabis and imphepho (the plant traditional healers burn to communicate with the ancestors) onto merino wool. On the other side of the world, Mr. Adachi San – the revered Japanese textile maker – made hand-crafted black wool suiting with tufts of rayon pom-poms hand-sewn onto the garment, thus creating a fabric that gives off the sense of at once, being prey and a predator. And in the

Netherlands, groundbreaking textile company BYBORRE created a fabric with elevated surfaces, in reference to the scarification that can be found on the skin of certain tribes in Central Africa. This concept also doubled as braille of one of my favorite quotes: “What you do for your ancestors, your children will do unto you.”

“I wanted to write about a group of badass women who haven’t undergone some sort of trauma to get where they are, which is how most films are. I wanted these women to have the luxury of just being” – Kristin-Lee Moolman

Why did you choose a film to express the thematic properties of this collection?

Thebe Magugu: I think it is quite interesting to consider because in the past, we were mostly limited to fashion shows and presentations. Then, with the massive global pandemic, we had to think about how to communicate the inspiration behind the collection differently and that is where the film came in. What is even more interesting about the world of film is that it gives you the power to really communicate and immerse people in the world you’ve envisioned. And working with Kristin has been amazing in the way she visually communicates my vision each time we work together, thus giving the clothes in the collection a second life.

Kristin, I’d like to get your perspective on how you view the place of film in fashion…

Kristin-Lee Moolman: I think that film helps to create worlds that elevate people while making it possible to create new mythologies and heroes – and with the world stuck at home it’s such a great time to shift perspective. There was this cross-pollination in the process of making this film that helped reveal the emotions in the clothing. Through the characters wearing those clothes, the designs gained specific identities and this film makes that possible. As opposed to a show where there is just a one-dimensional idea of what the designs are about.

Francesco, what stood out to you most when documenting what was happening behind the scenes?

Francesco Mbele: I think that in this new democratic age in South Africa, there still needs a lot to be done in documenting how stories are told away from the gaze of the oppressors. And it was interesting to see how everyone working in this film, the models, the actors, the stylists, viewed the film. I was just running up to the people and asking them different questions about what they thought of the film and that was a great thing to document.

What does working on this project mean for you as a filmmaker?

Francesco Mbele: Working with Thebe has always been great. I like that he allows me to do my thing when I am on set, it gives me a lot of confidence as a young filmmaker. And Kristin is someone I’ve always worked with and it has been great working with her too. Just watching her work inspires how I interact with my work too.

Thebe, through your zine and now this project, you are known for platforming emerging talents, why is that important for you?

Thebe Mgugu: I think now more than ever, fashion cannot fuel itself, and I think interesting things happen when different industries come together to make things happen. They are also able to experiment and try new ways to express themselves. And because there are so many mind-blowingly creative talents like Francesco here, I am always happy to help people who don’t have the same access rise to the top and craft new ways to see ourselves.