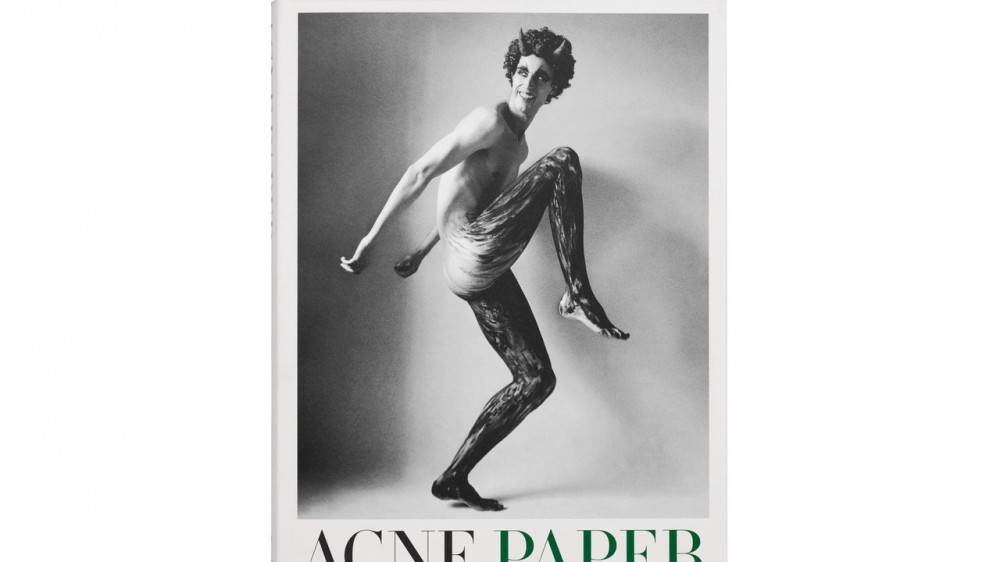 Acne Paper last appeared on newsstands in 2014—the 15th and final issue of a magazine that was coveted, collected, and considered among the most diverse surveys of culture and fashion over its 10-year run. Initiated by Acne Studios founder and creative director, Jonny Johansson, and edited by Thomas Persson, it was a non-conformist and stunningly presented exploration of creative insiders and outsiders. Issues ran according to themes—The Body, Escapism, Tradition, Eroticism—and without many core magazine features (endless ads, a table of contents). Unlike other independent titles that aimed to be subversive, Acne Paper aimed to stimulate, to be savored. It spoke to people who, trite as it sounds, craved style and substance in equal measure.

Today, the Acne Paper Book makes its debut as an extra-large commemorative flashback that also teases to the future. Running more than 560 pages and printed according to the same dimensions as the original magazine, the tome is massive—not unlike a bygone encyclopedia that might have contained all the knowledge of the ancient world. It is filled with archive material that runs chronologically, which means that Paolo Roversi’s epic photos of Tilda Swinton depicted as Marchesa Casati from Issue No. 9 (Art and Spirituality) can be found midway through. Returning as editor, Persson has selected features that draw attention to the caliber of contributors (Irving Penn, Snowdon, Bill Cunningham, Alex Katz, Richard Prince, Louise Wilson, Viviane Sassen, Eric Boman, Sarah Moon, David Bailey, Kim Jones; the list is long), while revealing the vastness of subject matter.

There is also some new content, including dramatic self portraits by photographer Christopher Smith who interprets all 15 issues in the first and final pages (these images are being exhibited at an Acne Studios pop-up gallery in Paris through early July), along with short notes and longer thought pieces by friends and contributors (Vogue Runway’s chief critic, Sarah Mower, penned an essay on Johansson). Altogether, the book feels less like a greatest-hits anthology than a meta magazine infused with a certain artistic nostalgia.

Housed in a slip case that swaps the brand’s distinctive pink for an equally distinctive deep green—one that is nearly identical to the hue of Parisian benches and bouquiniste outdoor bookseller boxes— this giant volume could have easily been conceived as the legacy of Johansson and Persson’s collaboration. But surprise: It is not the end, after all! Acne Paper will return with all new issues soon-ish (date to-be-confirmed). Given a title that is so willfully un-digital, the potential to fall in love with the format all over again seems promising, especially since Persson confirms that the magazine will tap into the talents and topics of today. So with the book serving as a beautiful bridge, the duo opened up in separate interviews about the significance of Acne Paper in their lives—and ours.

On reuniting for the book

Johnny Johansson: We have come together with the same sort of… the stars—how do you say—are aligned.

Thomas Persson: There were many years where he did his thing and I did my thing. Then, we reconnected and he asked if I would be interested in doing a book, which was just wonderful, because doing the magazine was the happiest time in my career. And it had just been on the shelf for so long.

TP: It was just a completely, wonderful freedom that I hadn’t experienced before or since. And it’s lovely when you can make your own decisions and you’re allowed to take responsibility and as a creative person. Because then you really feel responsible and you really feel, “Okay, I have to really make the best of this because I have nobody to blame.”

On reaching the end of the magazine after 15 issues

JJ: When we went different paths, when our worlds sort of split into a Y, it was very natural and felt very important for me to sort of focus on what I was doing, and for Thomas to also fly where he was flying. We’re really good friends and have always been.

TP: Jonny and I were both quite young when we started working together. It was like the beginning of a lot of things for both of us. We had this 10-year work-life collaboration and friendship. And I think we just grew a lot, both of us, during those years. He was interested in exploring some things and I was interested in kind of developing my career as well. It just felt like a natural moment—especially after The Actress issue—to end on a high note.

JJ: The thing is, you always want to make something new. Like, so many years passed. I think we both feel that we’re creating; we’re making this chapter; we’re closing this first chapter. And then we start a new journey and see. I always say, “It’s going to be 100% new,” but then it’s exactly the same as before.

TP: I had no idea that one day we would make a book out of it. I was so, so, so thrilled and it’s definitely, Jonny—he initiated it. But he left me to it to do whatever I wanted. And he completely trusts me… All of the people that we included in the magazine know they’re involved in the book. It’s been a lot of work. But everyone has been so excited—and everyone let us use their work. It was a complete kind of love—and kind of moving, actually.

On nostalgia: Are you a nostalgic person?

JJ: One hundred percent. I wouldn’t say anything like this a few years ago. I don’t have a good memory and I wish I had more memories of everything that happened to me. One foot in history excites me… And then, with age, you peel away some of the boundaries, I think.

TP: There were so many experiences and meetings with people in the making of the magazine. So obviously it does bring you back to those times. I have looked at it and thought, ‘Oh, those were the days.’ But I am very much in the present, working in the now. I have been described as nostalgic before, and it’s not really the case. I love history, but I can only look back so much. I try as much as I can to live in the very now; I think that’s the only place to really be.

On the magazine’s timelessness

JJ: Some of the contributors who Thomas chose are timeless. So those shoots, for sure, they really last. And then there’s some other stuff I feel that’s less important. But I really like to have that contradiction, because it also makes a lot of sense as a whole. It’s a time capsule, which I find interesting.

TP: If you look at the fashion, for instance, it still feels quite relevant. But I think, today, because the times that we’re living through are extraordinary, where the world is changing day by day, you kind of need to have a much stronger political awareness. I think that Acne Paper was made at a different time in the sense that it wasn’t political at all. It was all about beauty. I wanted to create a conversation between generations; it was always very important to me to have this kind of dialogue. So I think in that sense, it belongs to its time.

JJ: There’s two covers I really like. One is of Mikhail Baryshnikov. I thought he was like all the different creative disciplines that we’ve always been interested in. And then there’s the Escapism cover with the guy who’s sitting on the floor naked with his boots.

TP: Manhattan was such a joy to put it together. I remember it because I felt like I was inside a song by Ella Fitzgerald. In terms of art, I think The Body was a great issue—everything from Louise Bourgeois to Rubens to Lisa Fonssagrives-Penn.

On the weight—and weightiness of a book

JJ: [A] book is something that you have to take seriously at first sight. And for me, it’s like closing that chapter in a proper way. I think the respect I felt that I maybe didn’t give it back then I want it to have now.

TP: It’s a big archive to choose from, but [the book] needed to be a kind-of manageable size. I wanted it to feel like a magazine rather than a book. Hence the softness of it. It was really important to not have a very hard cover—to keep it like an issue of Acne Paper, but obviously with more pages.

On the cover: What comes to mind in seeing Christopher Smith’s self-portrait as a faun?

JJ: I think of everlasting curiosity for our genre, let’s say. It’s a good picture for rebirth. It opens up your mind a bit… And it’s like, ‘What’s the next step?’

TP: Yeah well, I love Nijinsky and Debussy’s Afternoon of a Faun. And then, of course, in mythological terms, a faun conjures music and eroticism and nature—and this suited Acne Paper quite well, as well.

On selecting this distinctive shade of green

JJ: I felt like, “Okay, this has to be an academic color.” It has to be something that captures the excitement of a library or excitement of bookstores—these places where there are people that put their heart and soul into knowledge.”

TP: It has an academic connotation—a serious kind of quality. I love the bookshop, Hatchards, Piccadilly, which has a similar green. Then, when I saw the picture of the faun, it all sort of connected, because I could imagine that the paint on his leg as greenish—and him as a creator of nature. Also, I think green and white and black is just such a gorgeous color combination.

JJ: First of all, we were always thinking internationally. When you’re young and you’re in a small setting, you’re always having an “I’m-bigger-than-this” kind of feeling. I think that madness, that whole light immature kind of outlook, it’s a great energy when you’re at that stage. And I think we had that back then. And it matured a bit along the way.

TP: Especially now that Acne Studios is so international, and people from all over the world work for the brand, I don’t think it has a distinct Swedish-ness in that sense. I never thought about it as a very Swedish company; but rather a company that comes from Sweden with an international outlook.

JJ: It’s difficult to get away from. I didn’t even think about that.

TP: Acne Paper was Jonny’s name, his invention. And I think it was really, really good; it was the best, most simple name we could do. And the paper is like, getting the morning paper. In the beginning, we really did look at newspaper-like magazines. The first issues were staple-bound; they were like a paper.

On the end of print

TP: I’m so happy that the digital and the print can co co-exist. I think we’ve seen that now. I think there was a moment in time where we were always discussing, ‘Is this the end of print?’ And I think we’re seeing that it is not, in fact. But maybe now, to print something, it needs to be of a high quality, and probably a bit more considered. You print it for it to live longer.

On the forthcoming Acne Paper

TP: The new Acne Paper is all about the current moment. History still informs the present in the new magazine, but it’s very much about the climate. It’s about injustice. It’s about a lot of things that are really important if you have a platform today. There are different subjects that we want to address because there are now so many important things to engage in. And everything is changing. I mean, I’m also much older as well. So it’s about expressing goodness and to trying to show support.