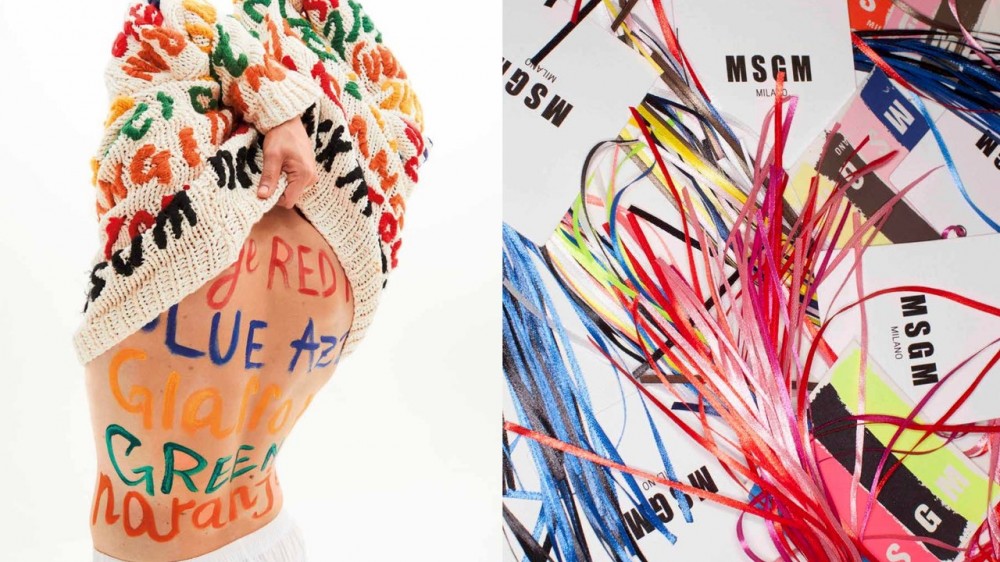 Italy is a country where we are brought up on bread and fashion. Good taste is supposedly ingrained in our genes and we’re all supposed to be effortlessly well dressed from the cradle to the grave. The “made in Italy” logo serves as a sort of emblem, touted by a community proud of its impeccable pedigree, its Almanac of Gotha resounding with names of family dynasties: Armani, Versace, Ferragamo, Missoni.

Yet for all its fashion superstars, the Italian fashion system has been slow to grow a new generation of young designers. One of the few independent brands to break Italian fashion’s glass ceiling has been MSGM, the brainchild of the self-taught designer and raw talent Massimo Giorgetti. Having cemented both commercial viability and international creative credentials, the 10-year-old label is now the subject of a new book, art-directed by Giorgetti with the help of his community of co-conspirators. Much like the designer himself, the book has an instinctive, dynamic vibe.

Here, Giorgetti talks candidly about his beginnings in the seaside town of Rimini, what success means to him, and why he thinks that a verse of an Emily Dickinson poem printed on a T-shirt is now more relevant than any logo.

Vogue: How did the MSGM 10! book come about?

Massimo Giorgetti: Actually, the request came from Rizzoli; after my 10th-anniversary show at Milan’s Triennale, they came to me. It was extremely flattering and gratifying, even if it has been a hell of a lot of work! Especially for someone like me, who basically hates editing—if it had been for me, it would’ve been at least twice as big. But it has been a wonderful journey, reflecting on all that I’ve been able to achieve so far…. It felt almost like a chapter closing to open the next one. The COVID outbreak happened while the book’s editing work was being completed, so it was another omen, so to speak, marking a sort of new phase not only for MSGM, but for us all, and hopefully for the fashion industry—even if I must say that so far I haven’t seen that many changes happen, honestly. But let’s see and stay positive. The approach is extremely personal; there’s my life in that book. There’s my family, my husband Mattia, my dogs Pane and Coda, and all the people who have supported and believed in me. My idea was to edit a sort of magazine, like a special issue of some crazy fanzine, conveying MSGM’s identity in a very direct, honest, unpretentious way. And the humanity and the togetherness that have always been important values to me.

Why were you drawn to fashion in the first place? Launching a brand is an ambitious project. What made you decide to do it on your own?

I must say that intuition has always guided me. In 2009, somehow I felt it was the right moment to start. MSGM was born as a small collective project between four old friends—the brand was actually named after the initials of my friends’ names: Massimo, Simone, Gaia, Maurizio. Even if we have parted ways, we remain close and they’ve always supported me. And the name MSGM was actually born out of my passion for music—at that time I was listening to a lot of indie groups, MGMT being a favorite. I was obsessed with the sound of those letters…then Coldplay came out with Viva la Vida, and on the CD’s cover there were those bright-colored stripes…. I remember perfectly when in my head the two things visually combined.

You were living in your seaside hometown, Rimini, which is known for its endless beaches and intense club life. How did your background influence your creativity?

I’ve always been interested in fashion—Rimini is actually a place where the latest looks matter a lot! I started as a clerk in the most fashionable store in Rimini, then I moved to consultancies for local brands and then I started to do small collections under my name, which surprisingly sold quite well. So my knowledge of market preferences and of the actual fashion product was quite strong and grounded—I knew what I liked and what the customers liked. The fashion that inspired me and that I wanted to make was very connected with the life I was leading at that time. It wasn’t just an abstract desire of dressing some unfathomable woman.

My first collection in 2009 was almost unisex—big, oversized sweats hand-painted by a crazy street artist, together with some sort of Chanel jackets in bright-colored tweed with distressed denim trimmings, lined in ripped-apart cotton piqué preppy polo à la Ralph Lauren. Kind of crazy, but it worked so well it was bought on the spot by 50 stores all over the world. I was honestly taken aback; I couldn’t believe it. It was streetwear Italian-style, with a bit of a rough edge but perfectly executed. As for Rimini, my passion for strong primary colors comes from there: the endless rows of sun umbrellas on the beach. I practically lived on those beaches until I was 33 years old, when I left for Milan! This is definitely the joyous, positive part of my brand. The other part comes from Rimini’s underground scene at that time. I was fascinated by the mix of characters and completely involved, from 1995 until 2000 it was my life. It was a free, progressive community, a nightlife subculture, transgressive, with no limitations of gender or sex or personal identity—and fashion was performative, a sort of self-expressive hyperbole, a statement to define ourselves. It was experimental and fun.

Your entrepreneurial spirit has certainly played a big role in MSGM’s success.

It also has to do with me never being satisfied. I’m always asking myself what’s next? How can I do better? But the bigger secret is that I’ve always been able to listen. And I have the courage of taking risks. At the beginning I was heavily criticized; my work wasn’t understood or it was overlooked by fashion insiders. While commercial success came quite easily, I was snubbed by the press at the beginning. I was hurt, I must admit. I had to really work hard to get the recognition I craved. But I have always asked opinions and listened to people I respected, editors and buyers. The feedback you receive is crucial—even if it hurts. The press is a mirror, editors’ and fashion critics’ opinions help me achieve what I want my brand to do, which is to speak the language of today, of now, through an honest, truthful message.

Have you made any mistakes that were instrumental to MSGM’s growth?

To grow up creatively, I’ve often collaborated with bigger talents than myself—stylists, photographers, artistic directors…. Their vision has helped me to expand mine, but sometimes I’ve allowed them to take too much space, and I didn’t recognize myself in the final outcome. Now I’ve learned not to be overwhelmed by someone else’s talent. It’s a mistake that I’ve seen many designers make. Style-wise, a mistake I’ve made perhaps was to rely too much on logos to assert MSGM’s identity. I presented my first logo-ed collection in 2012, so in a way I anticipated the big logomania tsunami of 2014/2015; I had a lot of success with logo-driven offers. But I’ve learned that logos aren’t just graphic exercises printed on merchandise; they’re meaningful and powerful identity signifiers. They speak of a true message of belonging and recognition. So they have to be handled with care. Behind the logo there must be a believable, honest message which has to convey emotions and a compelling narrative.

Now you use more nuanced messaging, which references the work of writers and poets.

It’s a very powerful way to reach a wider audience, a more elevated creative class, if I may say—architects, gallerists, even politicians…. Milan’s mayor has worn one of my white shirts with the slogan Milano!Milano!Milano! printed on it. It made me so proud. Reading has always been my passion, and replacing logos with quotes from my favorite novels or poems was a very instinctive choice. One of my favorite quotes is “lightness isn’t superficiality,” which comes from Italo Calvino, who is one of my favorite authors. It encapsulates perfectly MSGM’s spirit, and also it’s basically how I see life.

You’ve built a successful, independent brand from scratch in Italy, a country where fashion is understood by everyone but where it is actually quite difficult for young designers to establish themselves. Why do you think that is and what advice would you give to aspiring talents?

You have to recognize what is your best asset. And also you need a bit of luck and a certain alertness in taking advantage of moments of crisis—which seems a paradox but that is actually how it works. Surely 2021 will be one of those difficult moments, but there’ll be gaps in the market that can become opportunities. The digital age with its constant surfing has brought about a less faithful attitude toward brands; options have increased exponentially, so there’s definitely more space for exploring newness and for enjoying the unexpected. It’s true that our system hasn’t been very supportive to emerging talents, and the causes are many and it would be too long to analyze them here in detail.

But seeing the matter from my perspective…young designers here aren’t helped mainly because our family-centered culture is overprotective and basically makes young people spoiled, a bit lazy perhaps, with an insufficient amount of curiosity, not gutsy enough to pursue their dreams with conviction and to accept setbacks with resilience and strength of character, and also with the flexibility of mind and of attitude that the fashion world requires in spades. This is what I sometimes notice in the many job interviews I’m making when I need to hire someone new for my team. Talent alone doesn’t lead you anywhere. You need to have a firm grip on modernity, be involved culturally, be eager to learn and to listen and to take risks and bounce back when you’re unmercifully slapped in the face! That said, building a brand is always an uphill battle everywhere in the world, not only in Italy. Beyond a steely determination to succeed, the true secret to growing a brand is surrounding yourself with an intelligent team you respect and believe in, which you can trust and you listen to—but not a bunch of sycophants ready to bend at your every whim and who will never tell you the truth. You have to surround yourself with people who tell you what you’re doing wrong and why. If you don’t accept criticism, if you’re not humble, you’ll never, ever be able to move forward.

Success is a word that has come up many times in this interview. What does the word really mean to you today?

Success is achieving your dream—there’s nothing more magical than that. But it’s also an enormous responsibility that you have to manage very carefully. It’s like having a megaphone that amplifies everything you say or do. Once the Italian actor Massimo Troisi was asked by a journalist how he could stay level-headed being a very successful artist, and he replied, “Success doesn’t change people, but it’s like a magnifying lens of what you truly are and of what you’ve always been. So if you were already stupid, you’ll just become even more stupid, stupidissimo.” It really is that simple!