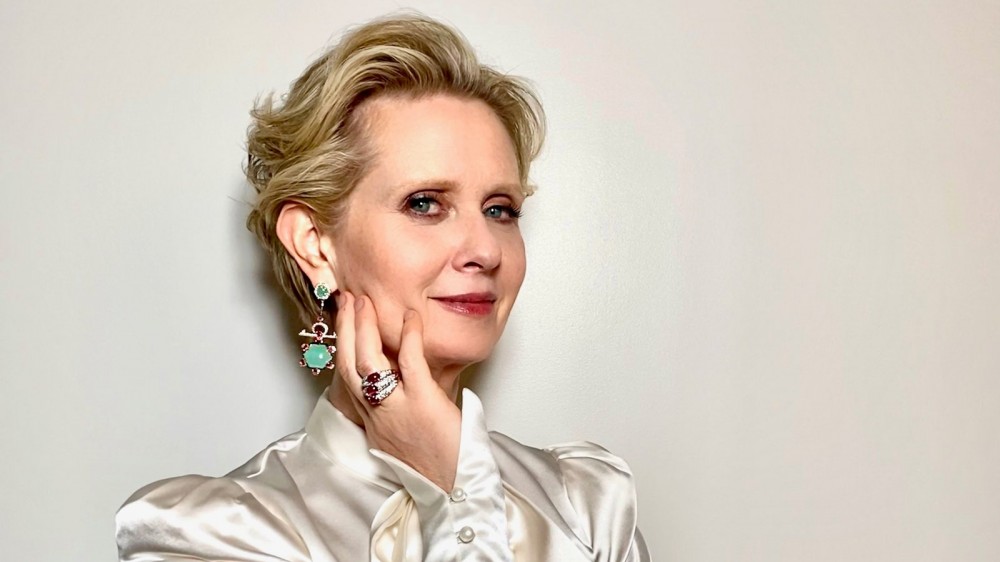 Last night’s virtual Golden Globes saw the majority of Hollywood stars tune in from their homes, and this was no different for actor Cynthia Nixon, who was nominated for best supporting actress for Ratched. Nixon spent the night serving Lebanese food and bourbon at her home in downtown New York. Her dates for the evening were her wife Christine, son Max, cat Aurora, and friend Tahanie Aboushi. “Tahanie is running for District Attorney in Manhattan and we were thrilled she and her husband Husam Darhaj were able to join us,” says Nixon.

Nixon kicked off award season on a high fashion note. She worked with her stylist Alicia Lombardini on two looks for the affair: one for the actual ceremony, and another for a special online video that aired during it. “It was great because we were having a hard time deciding [between outfits],” says Nixon.

For the video portion, which required a full-length outfit, Nixon went with a colorful Ronald van der Kemp gown with fringe detailing. “It moved beautifully because of the fringe on it, so I shimmied a bit,” says Nixon. For the ceremony, she switched into a chic white Vampire’s Wife gown that “was better sitting down, and it was just so elegant,” says Nixon. “I always love wearing white to an awards show, and the way the bow framed my face made it great for ‘popping’ on TV.”

Her glam team, including makeup artist Matin Maulawizada and hair stylist Peter Butler, were also on hand to make her camera-ready. With her stylist Lombardini, Nixon generally enjoys taking a more organic approach to dressing. “It’s hard to know exactly how you choose what you choose, but it’s kind of like falling in love,” says Nixon. “You can make endless lists of the qualities the theoretical outfit you want to fall in love with should have, but that very rational list gets thrown out when you see the one you want.” That being said, however, Nixon says she always looks for something that is eye-catching, original, “something that you will look your best in when you wear it, rather than it ‘wearing’ you.”

Looking back on her Ratched character, who is the love interest to Sarah Paulson’s Nurse Ratched, Nixon says Gwendolyn has “stayed with me,” and that she is also curious about what the writers will have in store for her for season two. “I love her strength and forthrightness and the way she wears her heart in her sleeve,” Nixon says. “She isn’t afraid to go out on a limb and make her feelings known, even when she doesn’t know if they’ll be reciprocated.” One of her favorite moments from shooting the show was when her co-star, Sarah Paulson, had a genius idea to commemorate one of their castmate Judy Davis’s final scenes on set (she played Nurse Betsy). “It was very late at night, and after they yelled cut, many members of our crew whipped off their fleeces and hoodies and were all wearing t-shirts that said different versions of ‘I love Judy Davis’ or ‘Judy Davis is my spirit animal’—or just ‘Judy F-cking Davis,’” says Nixon. “It was Sarah Paulson’s idea and she didn’t even have to have them made—she just found them on the internet!”

Her role on the series was also special to her, as it was the first role she took on after taking a year off from acting to run for Governor of New York. “I was a bit nervous, even more than I would have been starting a job under regular circumstances,” Nixon says. “I will alway be indebted to Ryan Murphy not just for inviting me into his amazing creative universe, but for showing me that post-candidacy, there were going to be more wonderful roles for me to play.” And here’s to many more.

Below, a closer look at Nixon’s Golden Globes night in an exclusive diary.