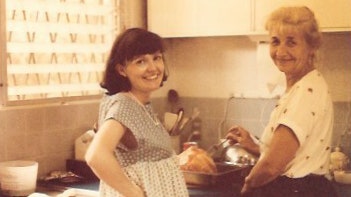 My mother is the opposite of a hoarder. Instead of cultivating mass ephemera, she’s obsessed with throwing everything away. We used to have a family joke that if you left any article of clothing in a closet for more than a year, you shouldn’t expect to see it again—except perhaps, at the Goodwill where it had been donated. This was particularly bothersome because my mother wore great clothes in her day. At her debs (the Irish version of prom) she looked like Elizabeth Taylor, decked out in a white gown she had made herself and covered with daisy appliqués. One of my favorite photos has her performing in a cabaret with nothing on but black tights and the perfect ’70s scooped-neck T-shirt. Emblazoned across her décolletage in sparkling sequins was the name of the club. I used to be so mad that she hadn’t thought of me, her future daughter, when she got rid of that shirt. I would have worn it to everything.

There were five dresses, however, that Mom never parted with and they took on a mythical reverence in our home. Dad bought them for her while traveling in Cape Town in the mid ’80s, and she wore them throughout both of her pregnancies with my sister and me. No one knows if they were originally designed to be maternity dresses, but they feature Empire waists and long flowing skirts perfect for accommodating a growing bump. Each of the dresses is made of a vibrant cotton, though my favorite has always been the mustard yellow one with black piping. The busts are embroidered with intricate stitching, and the sleeves balloon out from shoulder to elbow. When I was little, they reminded me of the high-waisted gowns Olivia Hussey wore in Zeffirelli’s Romeo and Juliet, and I spent endless hours flinging myself around our playroom in them pretending that I too was the lovelorn daughter of the House of Capulet.

Once I became a teenager, I couldn’t really wear the dresses anymore without someone asking me if I was pregnant. An Empire waist can be tricky to pull off, and mostly you need height to do so—something that, at five-foot-three, I lack. So Mom packed the dresses away in tissue paper with a hazy smile on her face, telling my sister and me that they were there for “when the time comes.”

This year those maternity-adjacent dresses have been on my mind quite a bit, especially since it seems they’ve come back into fashion. The printed cotton and long hems give the frocks an almost hipster/Amish appeal, or what fashionistas have coined “cottagecore.” It would be easy to picture Mom’s dresses on the runway of a Batsheva show or in a Taylor Swift music video, complete with a crown of braided hair and some leather ankle boots perfectly buffed save for a few clumps of mud.

I’ve also been thinking about these dresses because this was the year everyone I knew decided to get pandemic pregnant. It felt like a kind of milestone where all my friends put away their previous party lifestyles and started to pick up diapers and pacifiers. So much so that I decided it was finally time for me as well. I’ve always known I wanted to be a mother, in part because Mom was such an excellent example for me. (She told me once that her whole ethos for motherhood was based on a photo of Princess Diana kneeling with her arms flung wide open to embrace Harry and Will.) Yet in the last few years, I’ve felt hesitant to leap into this new maternal role, and shied away. When asked, I found myself repeating various familiar refrains to my husband: “Let’s try when I finish my book” or “Let’s try when I lock down that job.” Then when COVID-19 suddenly brought our busy lives to a screeching halt, it felt like I had run out of excuses. The time was now. What I didn’t anticipate was that it would be harder than I expected, eventually leading us to try IVF.

Once my husband and I picked a date to start the hormone shots, we had to leave our rainy island off the coast of Massachusetts and stay in Boston so I could be monitored daily at Brigham and Women’s hospital. My husband commuted from the island, but mainly I was in town by myself. Mom mailed me two of the South African frocks, one in white with a taupe detail and the other in sky blue featuring crimson threading. She said they were big enough to deal with the possible bloating, but also pretty enough to wear walking around the city. I packed them in my suitcase but didn’t take them out right away. I was afraid of the dresses, of what they symbolized and how much seemed at stake. I worried that putting them on would be like cosplaying a pregnant woman, and the hubris of such an act would be my undoing. I didn’t want to tempt fate. So I went back to my sweatpants and dirty sweatshirt and slogged to the hospital day in and out.

At first the fertility shots weren’t that bad, and the hormones didn’t seem to be affecting me. Then almost overnight everything changed. My body turned into a bruised peach, the needles left me in tears, and every morning I vomited as soon as I got out of bed. My husband was still a few days away from arriving, but the truth is I’m not even sure I wanted him. The person I really longed for was my mother. Laying on the couch and nursing a hormone headache worse than any hangover, I wished for Mom’s hands to lay a cool cloth over my eyes and to caress my hair gently. I wanted so much to be taken care of the way only a mother can—with an uncanny intuition of when to bring ginger ale, ladle a bowl of hot broth, or in the case of my Irish mother, make the perfect cup of tea.

It was then that I looked at my suitcase flung open on the floor and saw the blue dress peeking out from beneath a scarf. I wasn’t going anywhere that day except to get another ultrasound and blood test, but still I pulled the dress over my head and tied the ribbon in the back. Instantly I felt it: a kind of semblance of the maternal embrace Mom had raised us with.

For the rest of the week, I lived in the dress, taking it off only to bathe.

As they wheeled me into the operating room for the egg retrieval, a wave of comfort came over me knowing that the dress would be waiting when I woke up from the anesthesia. I’d folded it neatly on the chair before changing into the hospital gown, and taken a photo to send Mom. She replied with several hearts and told me to call as soon as it was over. I realized then that my mother was right, only the best items are worth saving.