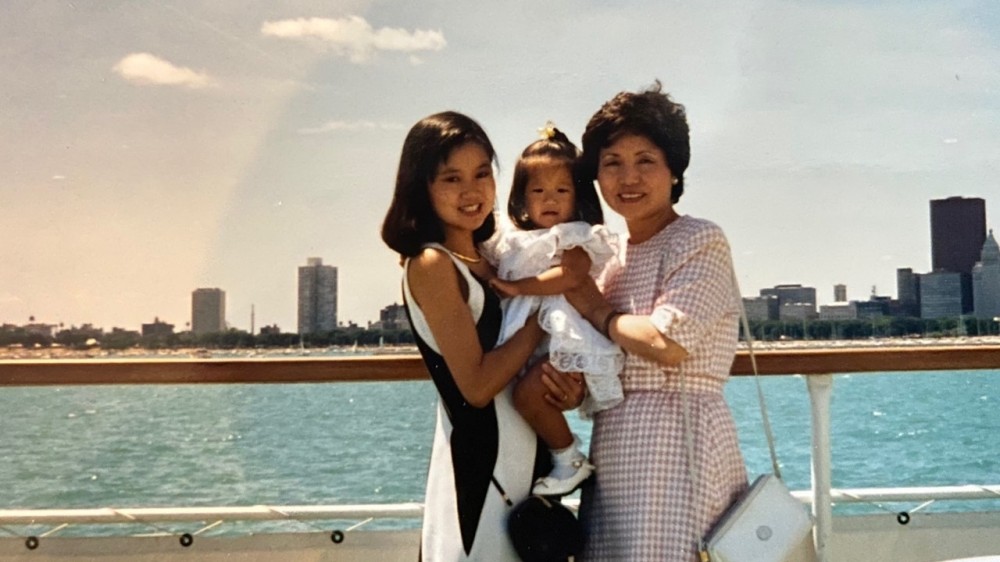 My mother came to America at the age of 21, newly graduated and newly wed, whip-smart with doll-like eyes and good dress sense. Without hesitation, she packed her bags in Seoul and joined my father in Chicago. I arrived three years later.

She was always exquisitely dressed. As a girl, I obsessively pored over the photographs from our years in Chicago, committing each frame to memory. There was the emerald green velvet skirt suit that she chose to attend a work party with my father. The elegant black and white sheath and sun hat she wore on a boat that we took sailing on Lake Michigan. The perfect high-waisted jeans she wore as we ate Korean takeout on a picnic in Lincoln Park. It was there, in those images, that my own love of fashion began.

Eventually we left and settled in a small town to the north, exchanging the high-rise buildings for a neat brick house by the river. My mother brought all her fine clothes with her. I watched her unpack the boxes. I thought she looked a little sad. My mother who grew up in Seoul, my father in L.A., and I in Chicago: From those cities we could not fathom life in middle America, the loneliness of being the only Korean family in so many square miles.

She readied us like a captain outfitting soldiers for battle. Suddenly it mattered more what we wore. She chose crisp suits and collared shirts for my father, scolding him on days he wore the wrong socks. She laid out my clothes as always, my favorite skirts and shirts, always matching. She perhaps hoped that dressing well would compensate for our color. Nice clothes might make us more palatable.

My father accepted without complaint but after my first day of school, I began to fight back. The way everyone had stared at me, in my dainty blue dress, had made my chest hurt. But instead of my yellow face, the only one in the room, I blamed the clothes that looked so fussy alongside the plain shirts and pants worn by the other girls.

“Why are you dressed like that?” they had asked me at recess. “Why are your eyes like that?” they would ask me later. At lunch I snuck off to the bathroom, peeled the tinfoil off of my ham sandwich, and cried, wondering why we’d come to such a horrible place.

I came home and told my mom no more dresses or skirts. I told her that I wanted to look like everyone else. I wanted to blend in. She knew that I never would. Only when I was grown would I understand. The eyes that followed us whenever we walked in a room. The curious gaze that always lingered a moment too long. “Why did you come here?” it seemed to ask.

Still, that weekend she drove us to the nearest mall, a half-hour north, and let me run around the kids’ Gap. I dove into the boys’ section, pulling out the shapeless sweaters and cargo pants I’d seen my classmates wearing. Afterward, she bought us cinnamon soft pretzels and lemonade from the Auntie Anne’s stand as a treat. Where we would go on to butt heads on so many things, curiously, when it came to fashion, she let me make the calls.

Instead she lead by example. It didn’t matter that the other mothers wore running shorts and windbreakers or that they cropped their hair out of convenience. She wore what she liked: lean boot-cut pants and leather trench coats, her hair long and black and shining. “Better a bit overdressed than under,” she always liked to say. I loved watching her lift the lid off her marbled jewelry box and clasp a tennis bracelet around her wrist like a silver bracer.

Even as a child, I knew that she was always the best-dressed woman in the room. It didn’t matter if people stared at the cut of her shirt or the shape of her eyes. She never dressed to fall in with the people around her, the way I did. She sat there, head high, and I wondered where she kept her courage.

On bad days, I would creep up to my mother’s closet and flip through her dresses for comfort. The red chiffon with paisleys fluttering down the front; the strapless number the color of rich port wine. Were they armor, these delicate pieces of silk and velvet? I would slip them on with her heels, wondering when I too would be grown-up and strong.

Her little lessons continued. Without knowing, I learned, as if by osmosis, how to wield a beautiful dress, a statement bag, as a form of weaponry. In a sea of whiteness, I would always stand out, no matter what I wore. But when I liked what I did wear, it mattered a little bit less.

I grasped this fully the summer I turned 16. I woke up one morning and reached into my closet, finding a white camisole trimmed with lace and a bit of moss green cashmere that clung to my waist and fluttered down toward my hips. I threw it on, tucked a little leather pochette under my arm—a gift from my grandmother in Seoul—and went off to the first football game of the school year. Standing there, in a crowd of blue jeans and jerseys and T-shirts, I thought I’d found a scrap of my mother’s courage. Even now, I have so much left to learn.