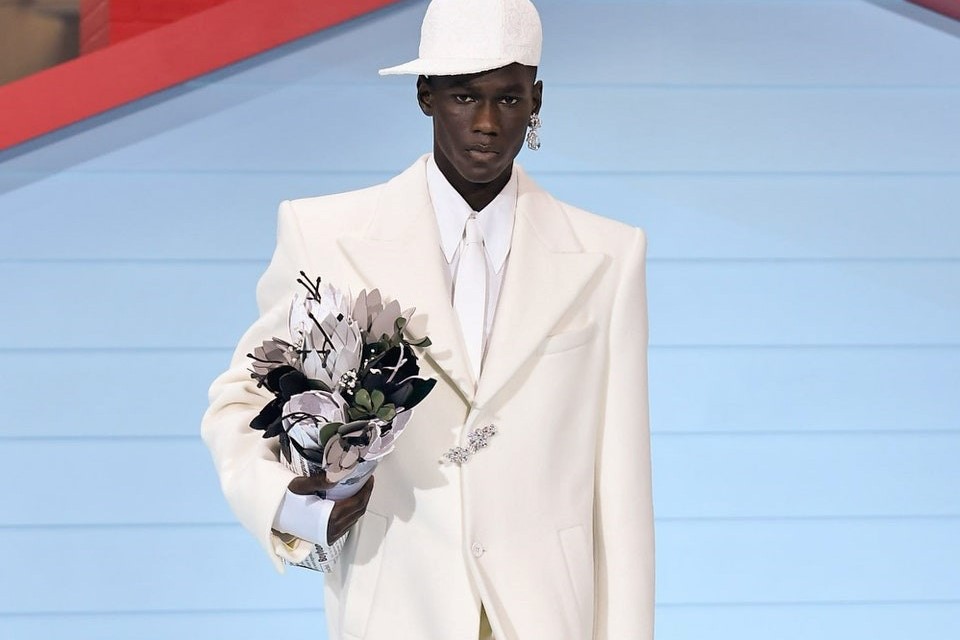 After three days of grey skies and grim, drizzling rain, on Thursday afternoon in Paris, the sun came out. The third day of fashion week marked Virgil Abloh’s final show for Louis Vuitton, and it was hard not to mentally run through his seven previous shows for the house – most of them similarly doused in sunshine. That monumental first show, back in 2018, when the sun beat down on the many hundreds of students that lined the rainbow-hued runway, or his SS20 outing, when he took over a quiet, cobbled Parisian street. Abloh seemed to have a knack for bringing with him brighter weather, even in a city famed for its moody silver skies.

Not that it would have mattered had the rain continued to pour as the visionary, landscape shifting designer’s final collection got its debut. Walking into the Carreau du Temple in the 3rd arrondissement was like walking into a blown-up, cartoon-like vision of Abloh’s mind, and the fantastical world he created during his tragically short, four-year reign at Vuitton. Having passed a group of pale blue pigeons outside the space, inside, a pale blue, red-roofed house with a chimney from which plumes of smoke rose was the central focus. Abloh’s work was always rich in its overt symbolism, and this was without doubt the place that it all began: his house in Chicago, where boyhood dreams began to form.

To the other end of the space, members of the Chineke! Orchestra – which is mostly made up of musicians of colour – sat atop similarly blown-up chairs, their legs dangling off the seats rendering them childlike and small. Just like Abloh was given (or rather demanded) his seat at the table, he was intent on giving others theirs. But perhaps most poignant of all was a set of pale blue steps, which it was hard to imagine could symbolise anything other than a staircase to heaven, and Abloh’s final ascent up it. Filing past the red-roofed dreamhouse and seeing that for the first time was emotional. Though it’s been almost two months since he passed away, it’s still difficult to grasp the enormity of what we have lost.

There’s a running joke in fashion about press notes. Some are so esoteric or cryptic they contain a handful of words if you’re lucky. Others are so lofty or the language so flowery the concept remains too abstract to get your head around. And that’s fine, if that’s how those designers want to get their message across (or not, as the case may be). But on each seat in the Carreau du Temple, atop a sky blue cushion bearing the LV logo, sat a bonafide stack of a set of press notes – 32 pages, to be precise, which, according to their co-writer, Vogue critic Anders Christian Madsen, is a record, even for Abloh.

His proclivity for spelling things out, for going deep on every concept or creation, is emblematic of his mission to educate, enrich, and converse with a new generation of creatives. Against all odds, he’d managed to smash down a door into an industry stacked against people like him, and wanted to bring them in too. A page filled with messages, quotes, and ‘Abloh-isms’ opened the notes, the most poignant of which has been shared far and wide, across social media and beyond, in the time since his death: “You can do it too.”

When Abloh was announced as the artistic director of Louis Vuitton in 2018, he faced snobbery and denigration from those within fashion and beyond, as insiders questioned his credibility and credentials in taking over such a widely revered house (never mind by this point he’d founded two successful labels and shifted the industry’s landscape in insurmountable ways). Of his first show, our former head of fashion, Emma Hope Allwood, said it “felt like seeing fashion change”. Across just four years, and eight collections, he continued to cultivate and shape culture, making Louis Vuitton not just a historic fashion institution but a community of boundary-pushing creative changemakers, too.

Abloh’s AW22 collection, which was 95 per cent finished by the time of his death, was a reminder of this wild trajectory and the last four years of his life. Louis Dreamhouse, as the offering was named, looked back in retrospect at his eight collections for LV and remixed and reworked elements in celebration and commemoration of his far too short tenure. On the line-up were a series of intarsia sweaters bearing the Wizard of Oz-inspired character line-up of his 2018 debut, while earlier motifs, including tapestry and brocade outerwear and tailoring that depicted Gustav Courbet’s The Painter’s Studio (first seen as part of a 2019 campaign) was also key within the collection.

Likewise, Abloh’s mischievous, childlike reimaginings of the LV monogram were found throughout, as models carried bright leather flowers in logo-emblazoned slings or swung paint can bags bearing the unmistakable moniker. Later, to close the show, came a series of all-white looks, that riffed on the kites seen on the LV runway for SS19, or otherwise the invitation for his SS20 show. With angular lace structures affixed to their backs, the models became angels as part of a fitting close to what was a moving, joyous tribute to a visionary gone too soon.

“Abloh never lost his excitement or enthusiasm for creativity, never became jaded by the naysayers that said he couldn’t do what he inevitably did, or by what can be a brutal, relentless industry”

As the event reached its climax, and Tyler, The Creator’s “See You Again” kicked in, the cast filtered out onto the floor, circling slowly and looking with childlike wonder up to the sky as one might do when they see a shooting star or a particularly beautiful sunset. I often think of the time Abloh explained “Everything I do is for the 17-year-old version of myself” – and have done even more so at the AW22 menswear shows. What would that young boy make of his eventual, cataclysmic impact on the world? Abloh never lost his excitement or enthusiasm for creativity, never became jaded by the naysayers that said he couldn’t do what he inevitably did, or by what can be a brutal, relentless industry. He may, cruelly, be gone too soon, but his legacy lives on in these sentiments, the vast body of work, and relationships he leaves in his wake. To reiterate that famous quote just one more time, remember: you can do it too.