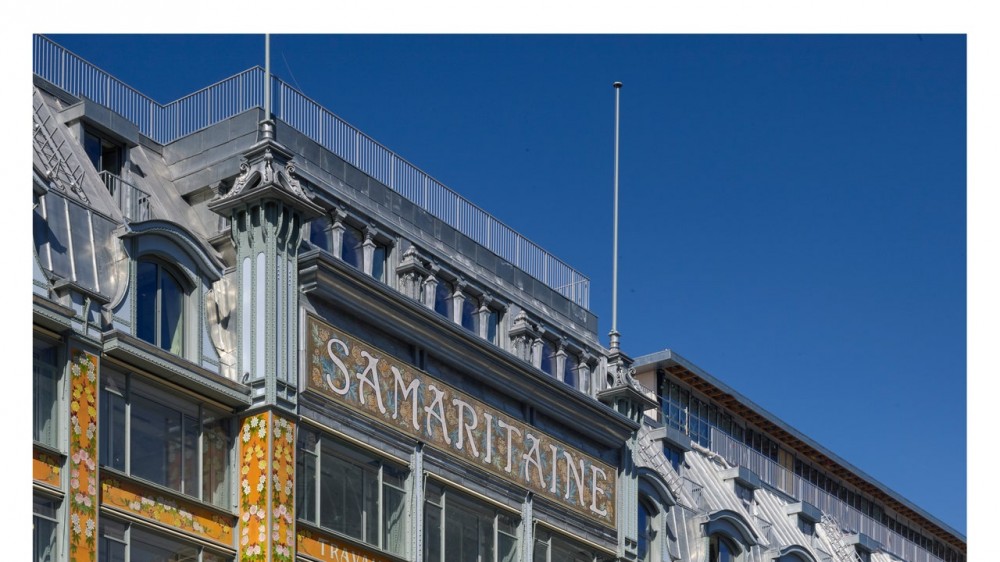 A century and a half after its founding by the self-made merchant Ernest Cognacq and his wife Marie-Louise Jaÿ, the second-oldest department store in Paris is ready for her close-up. And not only is she going to launch a zillion selfies, it only gets more experiential from there.

Imagine, say, Macy’s transitioning, swan-like, after 15 years (plus one) in deep sleep and a €750 million makeover, into a stunning hybrid of Bergdorfs, Barneys in its heyday, and the much-missed Colette, with add-on flourishes such as a stylish personal shopping apartment, a Cinq Mondes spa, and historian-led guided tours of the neighborhood. There’s even an underground passage leading from behind the Louvre straight into the largest beauty space in Europe.

Alongside the lovingly restored historic features—the Eiffel-era infrastructure, gilded Art Nouveau balustrades, and bright yellow Belle Epoque peacock frescoes on the fifth floor—are of-the-moment elements by a constellation of architects and interior decorators, who lovingly transposed indoors some of the City of Light’s most-loved features, like bouquinistes, kiosks, and Morris columns. The Pritzker Prize winning duo Sanaa created the contemporary building and wavy façade on the Rue de Rivoli side, and hewed out skylights in the original architecture to draw natural light all the way down to the bottom-floor beauty department.

Run by DFS, the travel retail arm of the LVMH empire—a branch that includes Sephora and now Tiffany & Co.—La Samaritaine was conceived like a moveable feast, poised at the epicenter of the renaissance now percolating in and around the Les Halles district.

“We wanted to create something festive and unique—an authentically French experience in the heart of Paris that blends the chic of Avenue Montaigne with the contemporary attitude of the Marais,” offered Éléonore de Boysson, president of DFS Europe and Middle East. “More than a shopping destination, it’s a global living space that’s generous, inclusive, and open to everyone. It’s a promenade, but it’s also a spirit because Paris is always on the move and there are so many different aspects to French art de vivre.”

With over 600 brands in the mix, De Boysson noted that there was something for everyone, from little gifts costing just a few euros to higher-ticket items like a bicycle painted in the store’s signature yellow and blue-gray at the concept store Loulou, or perhaps a six-figure scent from the Maison du Parfum.

On the ground and first floors, luxury, accessories, and women’s fashions sweep easily from street-forward and edgy to Parisian and luxe, with signature yellow ribbons flagging special items, from Assouline books to Cire Trudon candles and handbags by high-end niche brands like Serapian, Vanina, or Boyy.

Victoria Dartigues, senior merchandising manager for fashion and accessories, said her mission was to create an element of surprise. “We wanted to be international, but also to provoke ‘accidents,’ so that shoppers would always be discovering something new, for example emerging accessories brands tucked alongside more familiar names,” she said. “There’s an eclecticism, a mix and match that’s very modern, and there’s a strong point of view in terms of design with a few new names every season so that fashion lovers can really cultivate their own look.”

As an antidote to a 2020 lost to sweats, for example, Dartigues and her team created a section of dresses called In the Mood for Love; a mix of international brands, such as Gauchère, Sacai, Petar Petrov, Rito, and Studio Amelia sits just across the way. Selection aside, perhaps the greatest achievement here is invisible: anyone who has ever lost hope or patience trying to navigate a French department store brand by brand will be relieved to engage with a sales staff that knows this store from top floor to bottom.

At just over 215,000 square feet, La Samaritaine may be officially the smallest department store in Paris, but it’s really the French capital’s largest concept store, a highly curated fashion and beauty emporium offset by an ever-evolving roster of arty pop-ups (currently the Galerie Perrotin), installations by young artists, events celebrating French craft and art de vivre, and a dozen eateries, among them an in-house bakery that opens at 7am, the brasserie Ernest, decorated by design star Constance Guisset; a Prunier “Street Caviar” counter (15 grams for €15), and a top-floor bar and lounge that stays open until the wee hours. Perhaps inevitably, pose-and-post moments greet the visitor at every turn (a workshop collaboration with Polaroid is also available, should you wish to finesse your technique).

The hilarious throwback King Kong photo op is one surefire hit: the tech-savvy update on a ’70s-era black and white commercial lets customers act out their best Fay Wray moment before being slipped into a shopping bag with the store’s famous slogan On trouve tout à La Samaritaine (You can find everything at La Samaritaine). Seconds later, video and photo land in your email, ready to be shared with the world.

It goes without saying that these days finding everything at La Samaritaine is beside the point: A generation ago, that kind of store migrated into the ether, paving the way for 21st-century experiential shopping that fuses entertainment, art, food, and crafts-led events. Come fall, with the opening of the much-anticipated, palace-level Cheval Blanc Paris hotel in the landmark Art Deco building overlooking the Seine, it’s quite possible that a certain kind of well-heeled, would-be Parisian may never feel the need to go anywhere else.