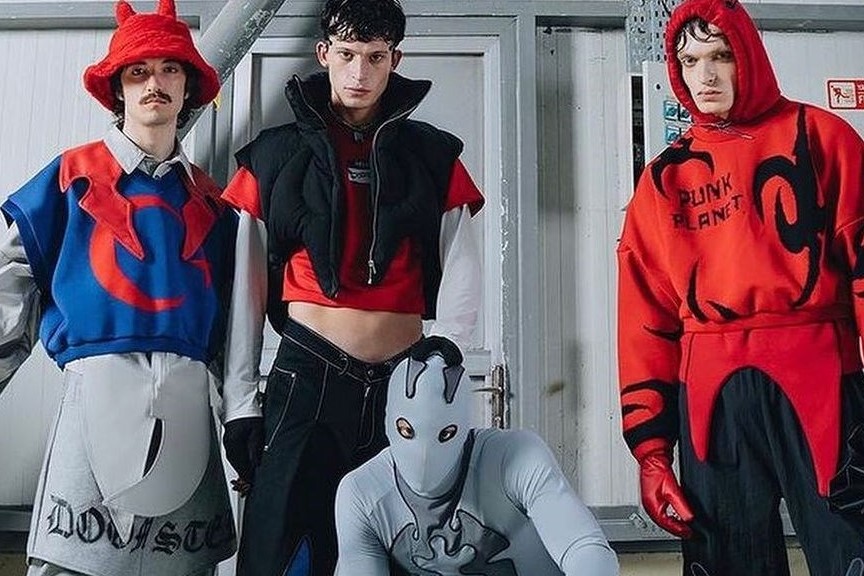 The big four’s SS22 shows – that’s NY, London, Milan, and Paris, obvs – may now have drawn to a close, but it’s always fashion week somewhere, baby! Right now, over in China, Shanghai’s first IRL events in almost two years are kicking off, with labels like Pronounce and SHUSHU/TONG making their triumphant and long-awaited return to the runway across the course of the next few days, before Moscow, Lagos, and Seoul Fashion Week all get underway later this week. Truly: whew.

Taking place this weekend was Istanbul Fashion Week, which didn’t quite manage to get back to its former, burgeoning glory, but this was in no way to its detriment. Instead, the biannual event went for a subtle and slightly more personal approach – inviting the international fashion crowd to take an intimate look inside its designers’ studios and ateliers, and unpack each wildly creative collection, in detail, with the people that made them.

Perhaps unsurprisingly given the events of the last year and a half, an optimistic sense of freedom united many of the collections coming out of Turkey’s second city – a melting pot of ideas where east meets west (quite literally – one half of Istanbul is in Europe, while the other, across the Bosphorus strait, lies in the western-most point of Asia). But not only that: the country is also in a state of flux when it comes to its political landscape and more specifically, the rights of women and the LGBTQ+ community. Much of what was on show – particularly when it came to the city’s younger designers – felt like a subtle response to this.

At Dice Kayek’s sun-drenched studio, the label debuted a short, Where The Wild Things Are-indebted film, showcasing an offering inspired by flora, fauna, and the natural world. “All through lockdown we were craving the great outdoors, so it made sense that we looked to the woods and the countryside for SS22,” co-founder Ece explained of the collection, which saw distorted florals and psychedelic prints clash against the couture-level hand-beading and traditional embroidery the label made its name on.

Elsewhere, Sudietuz’s Şansim Adali looked to her hometown of Anavarza, in the Adana region, for inspiration. Often referred to as the ‘invincible city’, the ancient settlement is littered with historic artefacts and well on its way to becoming a UNESCO world heritage site. Digging into the destination’s rich mythological history, the designer channelled a story of forbidden love into a computer game-style film, and dressed her strong female characters in a unique blend of street couture – all diaphanous, rainbow-tulle gowns and deconstructed, 90s style denim.

Perhaps most exciting, however, was the explosive talent incubating at Istanbul’s Moda Academy. Under the most difficult of circumstances – from the uncertainty and anxiety that came from living through an actual pandemic, to pulling collections together in cramped bedrooms during lockdown – this year’s graduating class has shown indomitable determination and strength, debuting a series of offerings that perfectly embody the creativity bubbling in Istanbul’s coolest nooks and crannies. Below, we meet just a few students from the wildly talented MA Class of 2021.

Berfin Özgür had no intention of studying fashion. It wasn’t until she enrolled on a fine art course at one of Turkey’s most prestigious schools that she realised the power of the medium. “I never felt connected to high fashion particularly – I just didn’t think I could express myself fully through it,” she explains. “When I started experimenting with clothing and fabrics, though, I began to understand its capacity to get my message across.”

Considering herself more a purveyor of anti-fashion than someone’s who’s going to be sending couture collections down the runway any time soon, Özgür’s inspiration for her graduate offering came by way of doomsday documentaries found on late night rabbit hole-dives into the deepest corners of YouTube. Entitled DOOMSTERS, the line rehashes the utilitarian uniform adopted by conspiracy theorists – think multi-pocketed gilets punctuated with clips and carabiners, overblown combat pants, and functional knits bearing slogans including “punk planet”. Essentially, it’s clothing for the end of the world – which Özgür reveals she one day hopes to see slowthai wearing.

The world may be more divided than ever right now – politically, financially, and ideologically – but Ercan Tenekecioǧlu’s was all about “loving ourselves and loving each other”. With lockdown forcing the young designer into an extended period of introspection, he began thinking about self love, and what truly loving oneself would mean for humanity and the ways in which we then treat others. This idea manifested in a light-as-air collection, Soul Seeker, which saw diaphanous chiffon wound around the body as part of artfully twisted, long-sleeved tops, romantically draping dresses, and calf-skimming skirts.

A more heavyweight foil to the barely-there pieces came in the form of skewed and spliced tailoring, with wide, angular jackets that split at the seams to reveal slashes of shoulder matched with louche, high-waisted trousers. The optimistic feeling that’s stitched through the fabrics of the offering reveals Tenekecioǧlu’s own post-COVID mood. “For me, Istanbul has emerged from lockdown brighter and more inspiring than ever,” he explains. “I can’t wait to see the creativity that bursts out of it in the coming months and years.”

Citing Iris Van Herpen as “one of the most incredible designers working today”, Öykü Ece Uza is all about innovation. With her eyes sharply focused on sustainability within fashion, the IMA graduate weaves her own fabric in a bid to keep waste at a minimum, and uses natural dyes including pineapple and beetroot juice to bring her collections to life. The garments themselves balloon from the body like living organisms, with pumped-up sweater vests in bold shades of Yves Klein blue and vibrant saffron matched with wide-legged, textured flares and cosy quilted leg warmers.

Though Uza has yet to figure out exactly how to make her creations commercially viable (“Every piece is made by hand and takes a really long time to finish”), right now she’s considering joining a fashion house to gain more experience in running a successful fashion business. Could a stint at Iris Van Herpen’s Amsterdam studio be on the cards for the young designer? Watch this space.