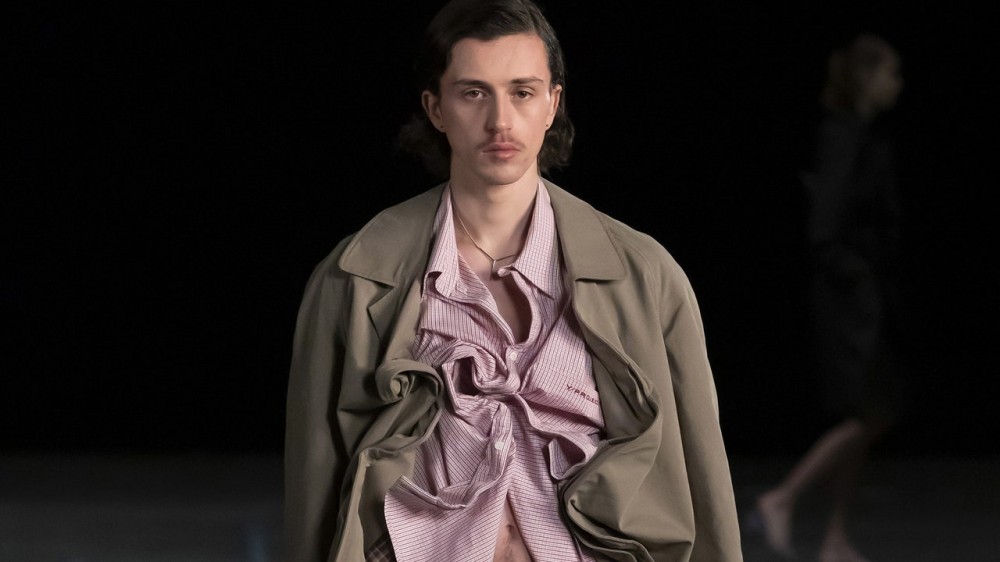 It’s T minus 10 days until the start of New York Fashion Week. With fall 2021 ready-to-wear shows about to occupy our attention, our critics are taking time to reflect on the recently wrapped men’s shows and how a year’s worth of lockdowns have reshaped not just what guys will be wearing when we finally re-emerge from our various quarantines, but the very purpose of a fashion show.

A sign of the times: The fall 2021 men’s collections started in December, and they’re still rolling out. What to make of the new normal state of affairs? These presentations—changed completely by the pandemic—are markers of everything that’s come down in the year since we were last gathered together in the hugging proximity of the men’s runway shows of January 2020.

Bur for all that—plus ça change. What really cut through amidst the digital, physical, and phygital collections; the Zoom conferences; and the materials sent around to reviewer’s homes? Ultimately, it’s the stuff that made us feel something, that viscerally communicated—in clothes, video, whatever which way—some deeper understanding of where we are now.

I can only offer a cross-section of the ways that did it for me. Virgil Abloh’s film and collection for Louis Vuitton, his superb, complex, and eminently re-watchable event which so inspiringly amplified the poetry of Black talent, the emotional day after the Inauguration. I’ve a feeling that it’s already transcended into being one of those rare, pivotal collections which will resonate, inspire, and be studied for a long time hence (the dossier Abloh produced on its personal, cultural, and intellectual coordinates is there to read in depth on his website.) Design-wise, and styled by the incandescently gifted Ibrahim Kamara, it was also far and away Abloh’s best so far.

We can be stirred by all kinds of frequencies in fashion; that’s what living through this pandemic has shown us. Visually, I completely adored Veronique Nichanian’s Hermès collection. Her sense of color shoots something glorious straight through the retina, even as her calmly realistic modernity soothes. I hate that fashion term “obsessed by.” But why, after speed-studying hundreds of looks this season, can’t I get that sweater, number 30—on a sort of teal background, with an abstracted, collaged suggestion of a cable knit on it—out of my mind?

I don’t revere massively expensive quality for its own sake. Things appeal to lasting memory freely and without any particular logic, as far as I can tell. That’s where Jonathan Anderson comes in. His completely zany shapes for his eponymous label (extreme triangular trousers!) and the discombobulating balance he achieves in the face-offs between radical art, homespun craft, and lastingly classic luxury at Loewe—that’s the sort of thing that keeps fashion creativity alive.

And you don’t need the power of a massive brand to do that. All along this switchback of an emotional time, I think it’s connecting with a sense of humanity that always wins out. Martine Rose managed to do that with her digitally-rendered tower block, into which we were able to peek into videos of ordinary people, doing the ordinary things we’re doing in our homes all over the world, wearing her spring 2021 collection. She didn’t need to belabor the fact that her vision is all-inclusive, diverse, international. To watch it had that feeling of bringing people together. In all our isolation, can fashion communication serve a better purpose?

Hello Sarah! You make so many pertinent points beautifully—as per—and I want to zero in on that look 30 Hermès sweater that is the object of your obsession. You’re so right: it is lush. Plus, it makes for a great starting point from which to post-mortem a menswear season that, from the armchair I spent way too long watching it from, was marked by one common characteristic above all others: distortion.

That cashmere sweater in “frost blue” is patterned with intarsia shapes and embroidered stitching (in lambskin) that represent a distorted image of something fundamental to this most stable (pun intended) of equine-heritaged luxury houses: saddlery stitching. As Véronique Nichanian said before this show streamed, her collection was heavily inflected by the “télescopage”—aka collision, buffering, and merging—that has seen the shape of our day-to-day experience distorted by the events of the last 12 months.

When the shape of human life is warped by change, our priorities and desires alter too. Last season we were at the bargaining stage of processing the pandemic’s life-distortion. One full year into it, however, the best designers seem so much further down the road towards acceptance that they are even starting to see the creative opportunities that are its by-product. For years fashion has sold ‘change’ and ‘newness’ while remaining largely unaltered. Now all that certitude has evaporated, and tastes really will change.

Looking at Glenn Martens’s Y/Project collection I loved that the furiously beautiful asymmetry in which clothes that a year ago seemed so daringly transgressive now seemed utterly appropriate—and that he amped up his stormy wearable rhetoric, understanding that his aesthetic and this moment have real chemistry. Another designer who has long delighted in inhabiting the fringes but now finds that altered gravity might push him closer to a new center is Rick Owens, who claimed—with tongue firmly in cheek—that his collection was rich in “regular guy” garms, while also forcing us to consider the dark forces that the term “regular guy” glosses over. Over at Balenciaga (where the fun but gameplay-lite digital presentation didn’t quite compensate for the gloominess of the lookbook), Demna Gvasalia said, “a lot of new things are being born now,” and leaned into hard times by proposing medieval solutions, while Jonathan Anderson opted for “extreme trousering”—nu-gen Oxford Bags—as his contribution to the potential distortion of menswear’s silhouette.

Virgil Abloh’s Ebonics collection for Louis Vuitton worked to excavate the positive distortion prompted by 2020’s BLM reckonings, or as the spoken word narrative had it: “deconstruct the narratives… make spaces.” At Prada, meanwhile, Miuccia Prada and Raf Simons reacted to the distortion of now by reducing man to a multiplicity of second-skin ‘body pieces’ and then rebuilding on that foundation afresh.

I’ve watched all of these fall 2021 shows and many more from my trusty armchair, but my fashion week experience was less about being isolated, and more about being still. In the Before, attending fashion week was like being on a speeding train—there was always change out the window, even when the collections you were traveling to see were often pretty similar to last season’s. Now, with pretty much the same view beyond the screen at all times it’s real change—sparked by our shared life-distortion—that makes for interesting collections. Phew! That got a bit complicated at the end. But how was it for you, Anders?

Maybe more than ever, this season I thought the industry had a responsibility to use fashion as a tool for change. I wasn’t looking for slogan t-shirts and collective kumbayas, but sophisticated and technical ways of making fashion contribute to ‘the new normal’ we want to see. Virgil Abloh’s game-changing collection for Louis Vuitton (and his poetic take on the digital runway format) activated every instrument in the fashion toolbox to make that difference. “Clothing is the strongest tool to assess somebody’s character. I don’t take that lightly,” he said. “Don’t judge a book by its cover.” He set out to de- and recode archetypes, conformist dress codes, and the human values we relate to them, and made us question the associations we draw from cultural and artistic references.

Every garment and accessory seemed cut from some kind illustrative or figurative technique, and imbued with thought-provoking question marks. I feel like most of us started the season asking ourselves, “What will I wear for fall?” While, somewhere in Chicago, Virgil was like, “This fall, how do I change the world?” I couldn’t write this without mentioning the Valentino haute couture collection (which had menswear in it) and the way Pierpaolo Piccioli re-appropriated the pieces of traditional wardrobe—the trench coat, the hoodie, the t-shirt—for a new normal, employing the tools of haute couture to transform our image of what these staples signify and represent.

Piccioli understands the raison d’être of haute couture in 2021: to make a magnified and consistent proposal through volume, technique, and, yes, human values, which might trickle into the way we dress and think on an everyday level. He uses his platform. “You don’t need a story behind the collection to justify its pieces,” he said. “The pieces are the story themselves.” The other day, a journalist asked me what I thought would be the next male ‘type’—à la the hipster, the e-boy and so on. I said the ‘anti-type.’ After 2020, stereotypes are redundant. In fact, we need a “Freedom! ’20,” but while we summon George Michael from the great beyond, I’ve been listening nonstop to the debut pop single that Silvia Venturini Fendi recorded for her men’s show, What Is Normal Today?

I liked the clever wit with which she approached what we might call ‘emergent fashion.’ Like Virgil and Pierpaolo and Véronique Nichanian at Hermès, I thought Silvia’s collection reflected a real study of what we’ll be wearing when we come out of confinement, turning traditional dress codes and those already-tired ideas of comfort-wear on their head, and challenging us to change our view of what ‘normal’ feels and looks like. (On a confinement-to-pavement note, I won’t soon forget Raf Simons’s onesies at Prada, either!)

Finally, I think it’s great to see how this pensive time has given some designers the YOLO to shake up their routines and directions. Those new energies really suited Dolce & Gabbana and Sir Paul Smith, who—at 74—poignantly summed up his post-pandemic collection as “a new lease on life.”

“Anti-type” fashion, as Anders says, might be the most exciting thing about the men’s fall 2021 season. I’m hoping Rei Kawakubo’s shoe hats at Comme des Garçons Homme Plus will live in closets alongside Ermenegildo Zegna’s spongy moss-colored knitwear. I wholeheartedly agree with Luke’s point, too, that we’ve moved from the bargaining phase to the acceptance phase of our new fashion world order. It’s had a freeing effect on design, pushing strange silhouettes, puffed up bubble bodies, and pleated kilt skirts to the fore. I’m cautiously hopeful that Fendi’s duvet shorts and Balenciaga’s knight pants will have a chance in real life—should we ever go out and have a real life again. Why not? Once you’ve accepted that life itself is strange, you have the freedom to dress even stranger.

There are bold creatives who really believe in cutting these new shapes: Jonathan Anderson, as everyone has mentioned, is one, Rick Owens and Rei Kawakubo are two more. Together, they all have proven that a business can be sustained by experimentation, ingenuity, and most of all fun. I would add Botter by Rushemy Botter and Lisi Herrebrugh as a new-ish peer. The brand’s cut-away lapel suits, umbrella cropped vests, and low-rise pants worn with voluminous boxers were singular.

For more traditional silhouettes, I thought Wales Bonner and Casablanca excelled at producing wearable, sensual, and convincing garments that don’t need any marketing tricks. Just really excellent clothing that I am just chomping at the bit to feel in my hands—and, if I’m lucky, wear. What’s more, both brands’ lookbooks delivered a concise, accurate portrayal of their garments. As exciting as a 3D-modeled outfit can be, there’s also something to be said for the way many younger designers have reinvigorated photography practices. Sean and Seng shot Wales Bonner’s studious collection; Yannis Meynadier photographed Casablanca’s playboys and playgirls. We should be paying more attention to the photographers commissioned to shoot these lookbooks!

Thanks to a little insider information, I can surely say the best is yet to come too, with Kiko Kostadinov and Celine showing later this week and Bode linking up with the womenswear collections later in February.