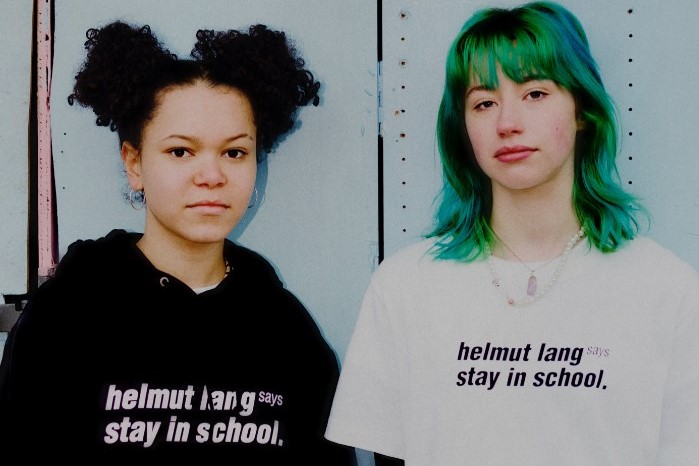 With the help of Jenny Holzer’s penmanship, monochromatic slogans were pasted guerilla-style across magazine spreads in a total rejection of the glossy standard of the day. Now, the brand is returning to such infamous statements, like “impress your parents wear Helmut Lang”, in a capsule collection fittingly called Slogan. The limited edition collection is made up of lockdown appropriate hoodies, joggers, and sweatpants, which come emblazoned with “my Helmut is older than yours”, “Helmut made me do it”, and “Helmut stay in school”.

Call me by your pain: Lil Nas X drops a shoe made from human blood

These particular aphorisms were first featured in Visionaire 14 Hype! – a 1995 spoof magazine which parodied the mainstream media and tabloid press. The mag was packed with mock articles, fashion shoots, and advertisements, to which Helmut Lang contributed a David Sims lensed ad for “Helmut Lang Industries, the only company that loves you”.

The capsule’s accompanying campaign was shot in Dalston over lockdown and stars a range of young creatives who came together to answer the question once and for all – how do you impress your parents? Turns out it’s just by being yourself: “I try to always be the most genuine version of myself to show them how the world is becoming a better place for everyone to exist,” one of them says.

The collection is now available on Helmut Lang’s online store. Click through the gallery above to see what’s on offer.