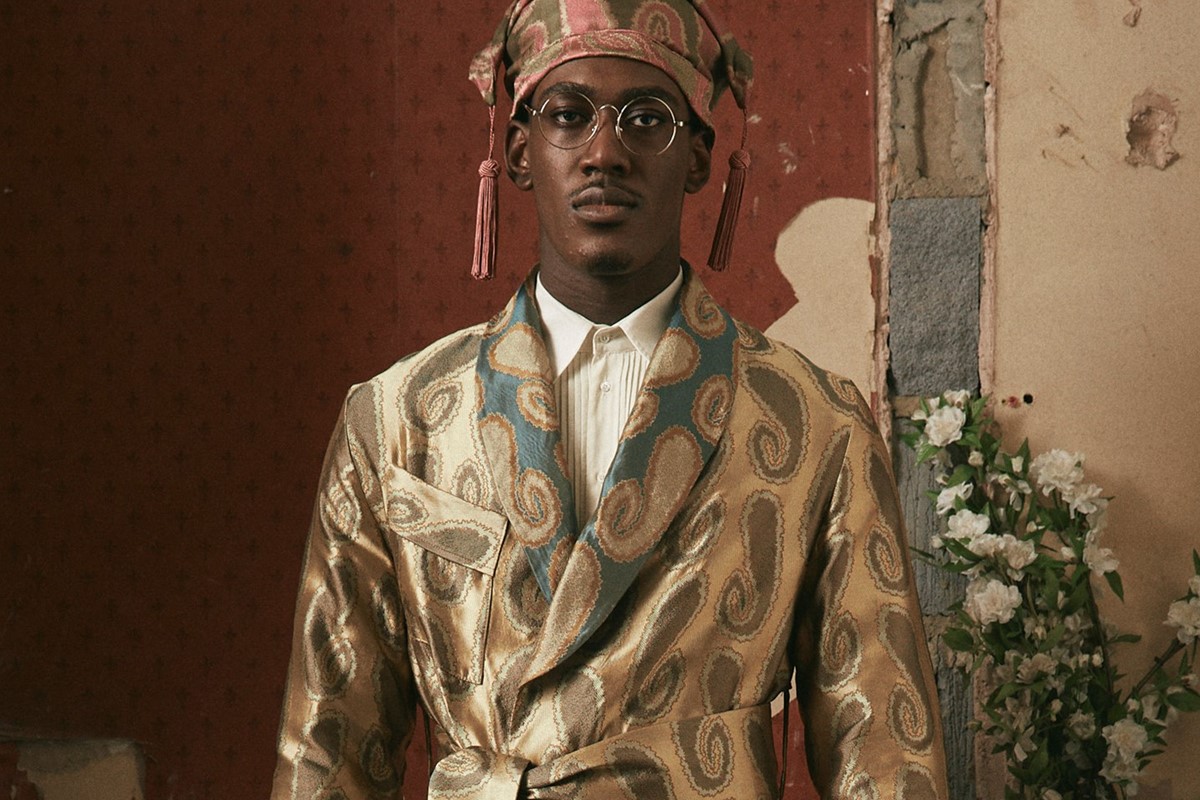 Steven Stokey-Daley was 14 when he found himself in the middle of a sports hall pretending to be a colour. Having caught the train down from Liverpool, it was his first time alone in London, choosing to spend the summer in the company of a hundred strangers while transforming himself into furniture, animals, and a completely different person. “Drama was my life back then. But after that summer with the National Youth Theatre, I never did anything with it again. It was really sad,” he says, fumbling to find a stool in his cramped East London studio.

As the designer takes a seat, he’s surrounded by tear-outs of Princess Diana, Kate Bush, and old Etonian schoolboys. Three interns are working in pin-drop silence while a PR taps away on her Macbook, guarding a small rack of confidential garments. But despite all the fanfare, Stokey-Daley was “never interested in fashion”. He never pored over cult magazines or worshipped at the altar of Vogue. The closest he got to practicing his craft was wearing a pair of brown corduroys to secondary school. “I do feel pressure to say I did all of that stuff but come on, it’s bullshit,” he says. And though he is now skilfully prepping for his third collection, which debuts today, there was a moment when his life was about to hurtle far off course. “I was actually meant to study English literature and theatre studies at Warwick. Like, we packed the car and everything. Then, the day before I was due to leave, I had this sudden gut feeling and changed my mind. I’m all about those gut feelings.”

One art foundation and a fashion degree later, and Stokey-Daley has fast become one of the industry’s brightest young designers. Today’s collection, which he refers to as his “third act”, brings together these two seemingly disparate worlds, showcasing SS22 through a series of staged vignettes, devised by ten 18-24 year-old members of the NYT. The performance – a violent Lord of The Flies procession into high-born chaos – sharpens Stokey-Daley’s ultra-fine unpicking of public school culture, having been inspired by all the taut blazers and wee straw boaters of Harrow school whilst at university. Since then, he has plumbed the camp idiosyncrasies of the upper class, forging collections patchworked from classic novels like Brideshead Revisited, Maurice, and Another Country. “This season, we’re looking specifically at the role sport within these schools and the toxic, masculine associations of the playing field and changing rooms,” he says. As such, his trademark overblown trousers and intricately embroidered shirting meet some slightly more libidinous hemlines taken from rugby, rowing, and cricket, like shrunken side-tying tank knits, fleshy cut-out singlets, and silken bath robes.

“I’m quite referential”, he says, gesturing to the floor-to-ceiling moodboard behind him, which is covered in pictures of Oxford rowing clubs, squares of ornate curtain fabric, and Mark Beard’s homoerotic illustrations of uniformed men. It’s easy to see how, as an outsider, the designer has read his own queerness on the pomp and performativity of public school culture. Not to mention all those locker room “japes” which posh boys love to engage in – communal showers, towel-slapping, or jokingly shoving fingers into each other’s arses. Likewise, their billowing shirts, extra long socks, and folksy flower crowns were not something Stokey-Daley experienced growing up in Merseyside, where people mainly wore “North Face jackets, trackies, and trainers,” as he recalls. “I’d always be screamed at by those boys,” which, more than some esoteric dissection of the upper-crust, seems to be the real engine behind this designer’s work. “The things that these boys are celebrated for – and end up in government official jobs for – are the very reasons I was bullied”.

“There’s a soul to Steven’s garments which is so beautiful. Usually graduate collections are so conceptual and unwearable but Steven manages to capture that editorial sensibility and drama while still feeling really believable” – Harry Lambert

It’s fitting, then, that an ex-Etonian, the school’s second Black head boy, stars in the show. “The actors are just amazing. But I never truly felt fit for that kind of thing,” Stokey-Daley says, pulling the sides of his shirt to a close. “It can be really difficult if you’re not conventionally good looking or six foot two. I remember someone said to me that I’d never make it as a gay actor and that I’d only ever be cast in those kind of roles. Those conversations really pushed me away from the thing I was so in love with”. And it would seem that Stokey-Daley has more than just skin in the game, but heart too, since his boyfriend, a dancer, experienced the decimation of the theatre industry in real time during the pandemic. “Having your professional world collapse and be totally disregarded by the government is really difficult so I started to question how a platform like London Fashion Week could support other creative industries.”

In a recent interview, Stokey-Daley was asked why he feels like he can “fetishise Tory behaviours” when he himself is “so working class”, as if he was a class-traitor, or worse, a fantasist for doing so. “I’m picking class apart. I get those questions so often and I feel like they’re not actually interrogating where I come from but they’re trying to keep me there”. It’s ironic, he says, given that there are so many exhibitions by Oxford graduates offering a view into the north, “which literally consist of like five black and white photos of a derelict building”. But if those words make Stokey-Daley sound in any way hostile, then that is to undermine just how sensitive his work is – something which stylist Harry Lambert quickly recognised, dressing his client, Harry Styles, in full S.S. Daley looks throughout his “Golden” music video. “There’s a soul to Steven’s garments which is so beautiful,” Lambert says. “Usually graduate collections are so conceptual and unwearable but Steven manages to capture that editorial sensibility and drama while still feeling really believable”.

Stokey-Daley credits much of his success to Lambert – who also styled this season’s show – not to mention the boom in business which followed “Golden”. Though he speaks shyly about Harry Styles (“customer confidentiality”) the designer does admit that the singer has been generous in his support, getting “a first view” at sales before they go public. It must be difficult, then, not to design with Styles in mind. Matches Fashion, too, has seen the Stokey-Daley dollar signs, launching the brand on its platform earlier this month. And, with his mum looking after all S.S. Daley shipping and logistics, the designer clearly keeps his business as close to home as possible, which perhaps explains that sense of “soul” which people talk about. For this collection, an elderly neighbour knitted flowers for vests, another worked on hats, while two more produced shirts. “It’s really beautiful,” Lambert says. “Steven has built a real community in Liverpool”.

While so many young designers are taught to be anarchic or aggressive with their first collections, that has never felt particularly “Steven”. And though he is radical, Stokey-Daley softens the blow by pouring himself into his work, using fashion as a means to soul search and balm the bruises of his teenage years, much like how he did with theatre. “I wish people would see the bigger picture,” he says, “every collection becomes more and more diluted with my own experience. This season, I reference my upbringing more than I ever have before and that lives within sportswear. I sometimes wonder how far I will take that, though.” It might be a while before we see Stokey-Daley send out ecru North Face jackets and poplin tracksuits, but at this moment in time, he’s happy with how things are turning out. “Right now we just need to get going,” he says, clapping his hands hurriedly before suddenly turning very pale – “oh my god I didn’t mean you, I wasn’t telling you to go,” he apologises, ”I just meant we really do have a lot of work to do”.