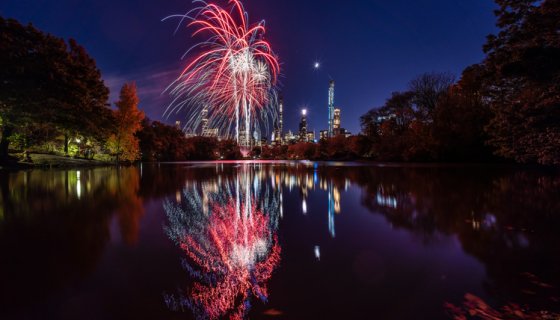 One of the best parts about growing up in New York City during the 80’s was the easy access to fireworks and how lit the 4th of July would be in the city that never sleeps. Though they’ve since been banned due to the countless injuries they’ve produced, this year has seen a record number of illegal fireworks light up the streets of New York at night.

The Gothamist is reporting that complaints of fireworks exploding through the night rose by 236 times compared to the same time period last year as there have been 6,385 call ins about fireworks from June 1st to June 19th. Last year there were only 27 in the same time frame. That’s a helluva difference. But these aren’t just your run of the mill jumping jacks and skyrockets, onlookers have noticed they’re pretty high quality displays that aren’t found at the local bodega backroom.

“This is not the simple firecrackers and little small toy-type rockets, but it was very elaborate,” Brooklyn Borough President Eric Adams told Gothamist/WNYC about his tour of the borough to assess the fireworks. “That in itself is raising high level of concern with me.”

Already some are theorizing that the sudden influx of high quality fireworks in New York City is part of a sinister plan by the powers that be to destabilize the current protests and Black Lives Matter movement which has had law enforcement on the ropes during the past month and change, and there actually could be validity to it.

My neighbors and I believe that this is part of a coordinated attack on Black and Brown communities by government forces; an attack meant to disorient and destabilize the #BlackLivesMatter movement.

2. Desensitization as a means to get us so used to the sounds of firecrackers and other fireworks that when they start using their real artillery on us we won't know the difference. It's meant to sound like a war zone because a war zone is what it's about to become.

The Brooklyn Borough President doesn’t believe this to be the case though as he’s said “There is nothing tangible that is attached to that at all” and “I’m not seeing any diabolical plot being planned out by the police department or some unit in the police department. I don’t buy that. I believe that there is a clear pathway of illegal fireworks in the city.”

Whatever the case may be there is a noticeable uprise in fireworks going off in night in New York City but whether or not it’s to set the stage for martial law or something remains to be seen. Until then some will enjoy the shows while others will be annoyed by the lack of sleep.

Can anyone explain why we’re getting Macy’s 4th of July level fireworks every night in NYC for the past 3 weeks now? Asking for a friend. It’s been nonstop from 8pm-3am in all 5 boroughs. #nycfireworks #fireworks #fireworksnyc pic.twitter.com/uPj5BOckgw