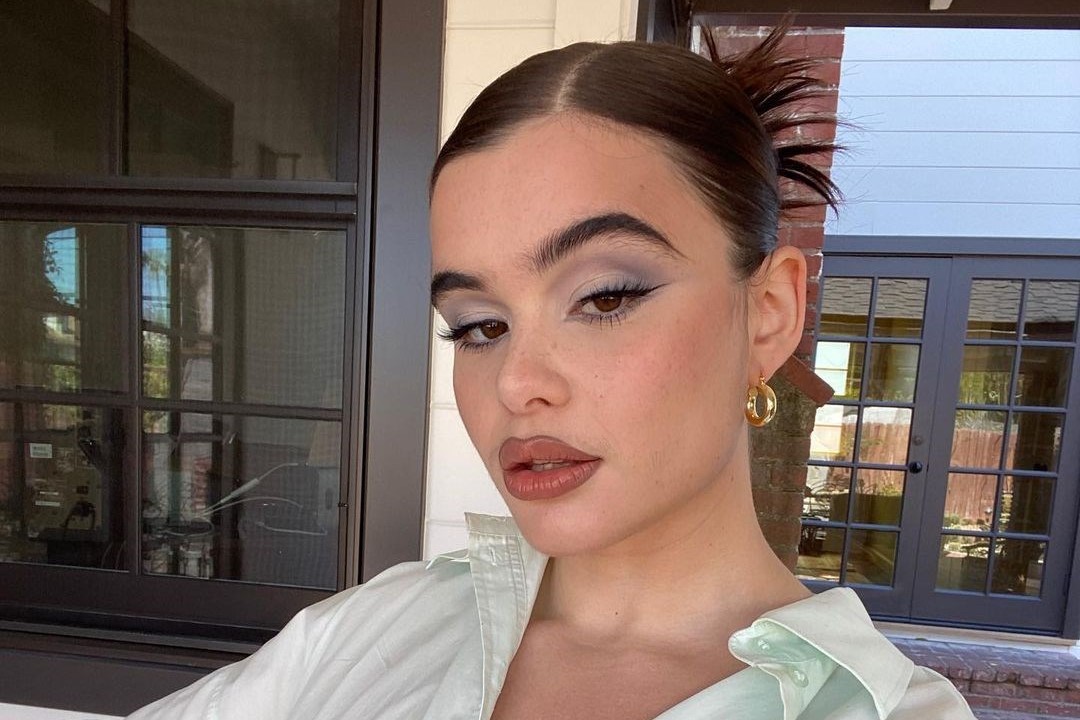 We catch up with the Euphoria star on stanning Charli XCX, her favourite up-and-coming designers, and finding a style icon in Zendaya

With a singsong hello and a throaty laugh, Barbie Ferreira bundles onto our call, illuminating Zoom’s drab grid as if it were a peppy quiz show or a 90s family sitcom. By her own admission, the actor’s feeling a little more excitable than usual, it’s just she can’t quite work out why. “I’m usually a pretty upbeat person,” she notes, “even if I am spiralling out of control.” While that could be the charisma talking, perhaps Ferreira is finally feeling her star whirl into its ascent, having just made her first Met Gala appearance, and feature film, Unpregnant, while filming season two of Euphoria. It’s more likely, however, that today’s jittery mood is simply a case of the butterflies, given that she’s currently getting ready to see Charli XCX play later in the evening. “Ugh, I’m so, so obsessed! I’m just gonna fan girl all over her,” she giggles.

In 2016, Time named Ferreira as one of its 30 most influential teens, a self-professed theatre gay who bloomed into an American Apparel model and body positive spokesperson when an unretouched lingerie campaign for Aerie suddenly went viral. A few years later and Ferreia landed the role of a lifetime as Kat Hernandez, a timid fanfiction writer turned BDSM cam girl on HBO’s boundary-breaking Euphoria. Since then, Ferreira has become an unwitting – though not undeserved – proponent of Gen Z style, her own panache scoring campaigns for the likes of Jacquemus, Givenchy, and Bulgari. Her Instagram alone is evidence of a self-assured, code-clashing cowboy goth, draped in Ottolinger, vintage Jean Paul Gaultier, and patent Tabi boots. And now, Ferreira’s latest project sees her join Pandora’s roster of cool girl ambassadors – the Pandora ME collective – among them Beabadoobee, Addison Rae, and most thrillingly, Charli XCX, which is yet further testament to the 24-year-old’s cultural currency and magnetic draw.

Here, we catch up with the model actor on her favourite up-and-coming designers, fashion faux-pas, and finding a style icon in Zendaya.

Hey Barbie! Firstly, congratulations on the Met Gala. Your look was a unanimous highlight of the night. What have you been up to since then?

Barbie Ferreira: Oh, you know! Just shooting a little Euphoria, running around, doing my thing. I actually got back to LA from New York like a week ago so I’ve just been hanging out at home.

So let’s take it back a little bit. Where did your sense of style come from? Did you feel fashionable growing up?

Barbie Ferreira: Fashionable? Hmmm. I was very experimental as a kid. I found a lot of joy in wearing costumes as clothes – make of that what you will – and I would literally wear them to school. I must have dressed up as snow white for an entire year or something ridiculous like that. That was definitely the start of my fashion journey. Oh, and my grandma, who is like ‘tacky chic’, would dress me up everyday. So I was definitely serving a look as a child. Whether it was good or not. I love to shock people.

And then you were an OG Tumblr girl, right? What were your favourite looks from those days?

Barbie Ferreira: Oh my god – yes. I was a Tumblr girl. I used to have hair down to my ass, a septum piercing, and really dark purple lipstick. It was called ‘Pale Grunge Blog’ so that was very much the aesthetic. I would take photos on Photo Booth and it was very grunge.

“I legit have a Jean Paul Gaultier collection. I’ve had a little archive going for a couple years now because he uses very stretchy material and it’s hard to find vintage things in my size but JPG was always on that wave. He always knew about it” – Barbie Ferreira

Love that. Do you ever look back on that era and get cringed out, though?

Barbie Ferreira: Everything I did was so embarrassing! I mean it was cute and I loved it but everything was a fashion faux-pas. I don’t know, I used to wear a lot of streetwear brands, which is just funny to me now because it’s not something I go for anymore. But I don’t actually regret any looks, per se. You know, I think I was a pretty fashionable teen.

So then how did becoming famous change your style do you think?

Barbie Ferreira:  Well I love to play with my style. Every year I embody something different because I get bored and like a change. Ever since I started acting I’ve had more leeway with my looks because I was so scared of altering my appearance when I was only doing modelling. And it was that way for like five years, I had to keep everything the same. But now that I’m an actor I can experiment more with haircuts and body mods. You know? Tattoo vibes.

And you’ve worked with some amazing designers in that time – Jacquemus, Givenchy, Simone Rocha. I saw you wearing an Ottolinger look the other day which was phenomenal. Who has been your favourite to collab with?

Barbie Ferreira: Oh you don’t understand, I love Ottolinger. Actually, I love all of the designers you just mentioned. Givenchy’s incredible. I love my Jonathon Simkhai look that I did for the Met and he has really cool stuff, too. I love Collina Strada, like love Collina Strada. You know for me I love brands and designers who are willing to really think outside the box. If I go to a department store I never find anything I want because everything’s either beige or not my size but a lot of the cool indie designers that I adore have such cool stuff. Oh and I love Yang Li and Kim Shui, too. To be honest, everyone I get to wear has a special place in my heart because I get to wear cool clothes and that’s all I’ve ever wanted to do.

If you could work with or get your hands on any designer’s piece from fashion history what would it be?

Barbie Ferreira: Okay so I legit have a Jean Paul Gaultier collection. I’ve had a little archive going for a couple years now because he uses very stretchy material and it’s hard to find vintage things in my size but JPG was always on that wave. He always knew about it. So I love Jean Paul Gaultier. I actually look to him for a lot of inspiration for my looks.

I can see that! Do you have any other fashion crushes at the moment? Who among your contemporaries do you think is killing it?

Barbie Ferreira: Sorry I just wanna add that I’ve also been loving what Schiaparelli is doing, too. But I mean in terms of people, obviously Zendaya. I love her, she’s a fashion icon. And actually a lot of people in my cast are killing it. Hunter, Alexa… all the girls for sure.

Yes! Why are the Euphoria girls taking the fashion world by storm?

Barbie Ferreira: It’s down to the casting directors I think? We are all just fashion girls. We all like love love fashion so it’s kind of cool to have friends and coworkers who love the same thing as you. But yeah, we have such distinct and different styles, it’s really so fun. We look like a little girl band.

That’s such a good way of describing it. You and Kat shared a wardrobe in season one – can we expect to see the same for season two?

Barbie Ferreira: Yeah! Heidi Bivens is incredible. She won an Emmy – because she deserves it and, in my opinion, is one of the best costume designers in the world. This season is filled with looks from a lot of the designers I mentioned actually, plus a lot of my friends’ stuff. That’s the cool part about Euphoria. We all bring in our friends’ brands and jewellery, or like custom looks from random small shops or whatever to really personalise our wardrobes. So yeah, it’s been a very collaborative experience and I’m excited for you guys to see the looks!

And from one girl band to another, you’re now part of the Pandora Me collective. What’s so special about joining its ranks?

Barbie Ferreira: I mean first of all I love Charli XCX so much. I just did her podcast but I’m like obsessed with her. But honestly I just love jewellery which is fun. I don’t like when jewellery looks too stuffy – I like when fashion doesn’t take itself too seriously. I’m wearing the green ring from the Me collection now, which I’m obsessed with. I love layering them and having loads of charms. I love the pearl charm. I’m a big accessories girl so I like being able to mix and match a tonne of jewellery. Sometimes it’s in good taste and sometimes it’s not – but that makes it fun!

Has that always been reflected in your jewellery choices?

Barbie Ferreira: Kinda! When I was young I didn’t have enough money for clothes but I would always buy really crazy jewellery from eBay and Esty. This Pandora collection really reminds me of that time in my life and all the fun you can have with jewellery.

Finally, what would you say is your go-to piece from the collection?