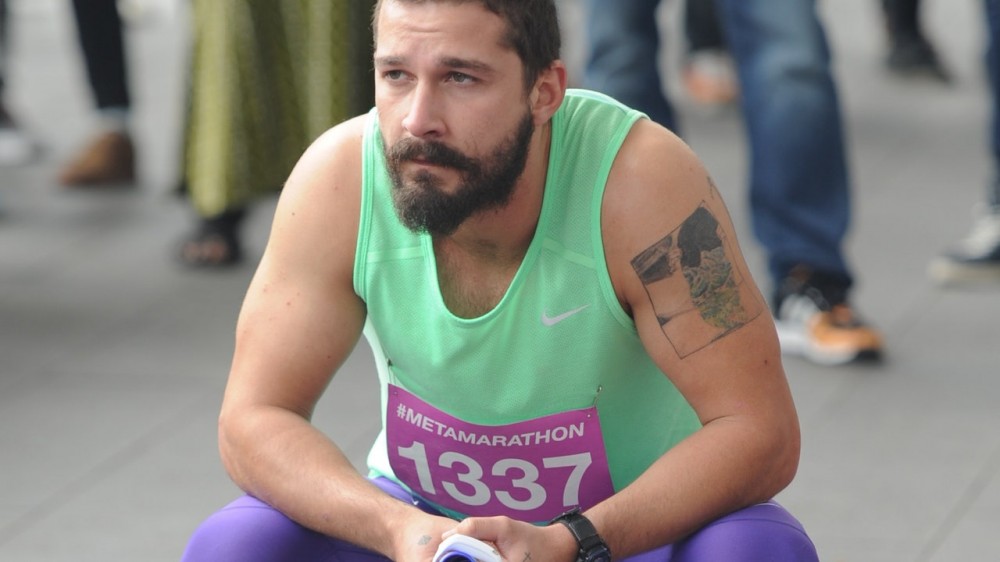 Who is the man spotted in Los Angeles behind an orange mask that reads “ORC,” a dirt brown hoodie, well-worn moccasins, and body-skimming Nike tights? It could only be Shia LaBeouf. Today the actor, who also boasted a cast on his arm, stepped out into a parking lot with a bag of groceries. His outfit was LaBeouf to the core, a casual look—hoodie and hat—but with a zany touch of “oh!” with a pair of black Nike tights and brown suede moccasins.

The actor has a love for the outré. He did, after all, once walk outside with a paper bag over his head that read “I’m not famous.” But, stunts aside, he has a special knack of putting together an outfit that few others could execute. (Who else do you know besides a disheveled sorority sister who can wear high-waisted sweatpants and classic UGG boots?) There is even an account dedicated to the man’s looks that is titled @shiasoutfits, which is inching its way upwards to 200,000 rabid followers.

Today’s tights and moccasins combination worked in the same way that dipping a salty french fry into a Wendy’s Frosty works: counterintuitively, but wonderfully. I love that he wore them, and that he often does. Go onto @shiasoutfits and you’ll see that every other image of the man involves a pair of thigh-hugging compression tights in a selection of colors. Some of his most famous polyurethane-centric looks have included a glistening fuchsia pair and later a soft purple version also by Nike. It’s bold, and sort of beautiful.

LaBeouf likely doesn’t care about this, but he is completely on-trend with this rather classic look. Back in 2015, Vogue’s Archive Editor Laird Borrelli-Persson did a stellar roundup of men’s tights in history in which she referred to the look as “brosiery.” The slideshow featured ballet dancer Mikhail Baryshnikov, David Lee Roth of Van Halen, football player Torrey Smith who wore a pair of colorful tights on the field of a San Francisco 49ers game, and a Jean Paul Gaultier model trotting down the runway in a slick pair of thick black tights. Over Slack, Borrelli-Persson said that tights for men have been having a bit of a comeback in fashion over the past few seasons. And on the runways, Christian Cowan showed a glitzy checked pattern tight for spring 2021, while Rick Owens offered the style in slinky black for fall 2020, the same season that Balenciaga sent models in red, blue, and black spandex down the catwalk.

I adore LaBeouf and his love for both black and candy-hued compression tights the same way that I adore Harry Styles’s love for skirts and other men’s sleazy love for pointy toe shoes. It takes a special, confident dude very comfortable with themselves to let their thighs be coddled and defined in a pair of tights—there’s nowhere to hide. And in blinding colors and prints? It’s a beautifully brazen style choice. In other words, don’t fear the grip of spandex, and instead make like Shia and welcome its embrace.