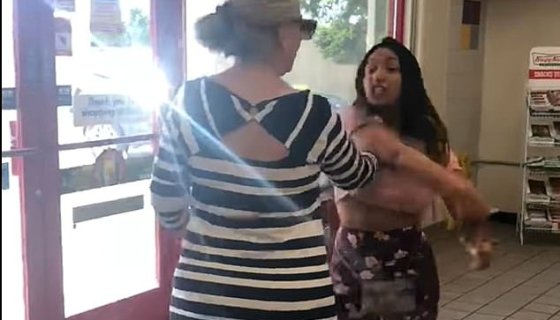 Let’s start by saying that we certainly don’t condone violence, but we understand. The husband of the has apologized on her out of pocket behalf, and blames it on mental illness.

Guess who’s not gonna take it anymore~ Arizona 'Karen' is slapped in face by Hispanic woman after screaming at her to 'go back to your own country' in racist rant at gas station pic.twitter.com/Bhc9eD33gx

By now you may have seen the aforementioned clip where a white woman dared to put her hands on a young woman who she incredulously told to go back to Mexico. It wasn’t until the woman who has been described as Hispanic (real name Karina Rodriguez, born in the USA) was touched that she let off a swift slap to Becky’s jaw, sending her scurrying out the gas station.

While Twitter overwhelmingly cheered the turn of events, many were surely waiting for KKKaren (real name Tamara) to try to sue or play victim after being outed.

However, Arizona Karen’s husband, Bob Harrian, has come forward to say sorry about the situation, and explain why.

“Karina, I don’t know what to say. I’m just so sorry,” Harrian told FOX10 Phoenix. “I’m just so sorry that this happened. You never walked into that store thinking something like this was going to happen. I understand, and I’m sorry. I’m sorry for what she said. It was very hateful. It was—it’s indefensible, but I just have to tell you this. It’s her mental illness. A year ago, she would never done—never have even thought of that.”

So it’s a mental health thing? We’re hope he’s being sincere (we didn’t see any actual tears in the emotional video below), but bruh, get your Karen some treatment before she really gets dealt with properly out in these streets. Just saying.

Tamara Harrian "Korner Store Karen" is Operations Manager at The Harrian Law Firm in Northern Arizona. She has been identified as the "Karen" in a viral videohttps://t.co/I3xY6NgUED pic.twitter.com/NcVdSOqoHJ

I give it a day before Arizona Karen aka Tamara Harrian, comes out with a fake/forced apology.

If we’re lucky, she might even cry and say “I’m not racist, my next door neighbors cousins daughter just married a black guy and I added him on Facebook”

@PhoenixPolice
When will Tamara Harrian be charged for assaulting this woman and screaming for her to go back to her country?Arizona Karen slapped by Hispanic woman after screaming go back to your own country identified https://t.co/fl2sqlLwHu #Tamara Harrian #Karina Rodriguez

Racist tells Native American woman to “go back to her country” grabs her, and gets SMACKED. pic.twitter.com/f1JrXOjznK

And stop arguing if she Native Mexican or Native American. It's a mute matter. Colonizers conquered the land we now call Arizona from Mexico. So her DNA would be native to the land no matter what.

I believe Arizona has a Stand Your Ground law. I also believe this woman stood her ground and sent Karen for the Exit.

At first I was like, “Whoa, that slap was assault.” I was thinking racist lady was going to get the other arrested. But then I noticed that the smaller woman was trying to walk away and Karen grabbed her.

Sharin’ a slap with Karen.

In case anyone else wanted to see the Gas Station Karen Slap on repeat pic.twitter.com/lZkbNAY3Mw