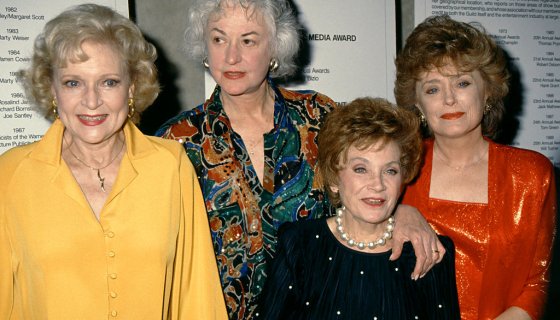 Fearing a potential backlash from Black folk, Hulu earned itself some eye-rolls from fans of the classic comedy sitcom Golden Girls after pulling one of the show’s hilarious episodes.

No one asked for this.

That’s what Black Twitter is saying after the streaming platform got a bit overzealous and pulled the Golden Girl’s episode titled “Mixed Blessings.” The episode which aired back in 1988 on NBC focused around Dorothy (Beatrice Arthur) not being happy with the fact that her son was marrying an older Black woman named Lorraine (Rosalind Cash). Meanwhile, Lorraine’s mother, played by Virginia Capers, is not pleased that her daughter is marrying a white man.

The “incident” in question involves the characters Rose (Betty White) and Blanche (Rue McClanahan) who happen to be wearing mud masks in the scene as they greeted Lorraine and her mother. Rose explains, “This is mud on our faces. We’re not really Black.”

Black Twitter immediately balked at the decision pointing out that Hulu clearly overreacted and doesn’t know the difference between a mud mask and Blackface. Writer Roxanne Gay called the decision “counterproductive and stupid.”

Removing this episode is weird, counterproductive and stupid. It diminishes the effort to actually end racism. It’s just so dumb.

“First of all, they were in mud masks not Blackface. And second of all, in what world does ‘Stop killing us’ sound like ‘Please remove episodes of Golden Girls’? I didn’t see that ask on anyone’s protest sign.”

To be clear: I’m not “attacking” Hulu. I would just hate for the seriousness of this moment and movement to get lost in symbolic (and sometimes silly) overcorrections. Impact on real lives should be the measure of any change worthy of a PR push.

Hulu’s actions come on the heels of other shows atoning for using Blackface. The Office pulled an episode titled Dwight Christmas that featured Stanley (Leslie David Baker) not too pleased at the idea of Dwight (Rainn Wilson) dressing up as Belsnickel’ (German Santa Clause) assistant, Black Peter. Dwight secretly calls his friend, who is donning Blackface, and tells him not to come to the office.

The show’s creator Greg Daniels spoke on the episode stating:

“The Office is about a group of people trying to work together with mutual respect despite the inappropriate actions of their boss and assistant manager. The show employed satire to expose unacceptable behavior and deliver a message of inclusion. Today we cut a shot of an actor wearing blackface that was used to criticize a specific racist European practice. Blackface is unacceptable, and making the point so graphically is hurtful and wrong. I am sorry for the pain that caused.”

Another classic sitcom, Community, also pulled an episode from season 2 titled Advanced Dungeons & Dragons from its Netflix library. In it, Ken Jeong’s character, Ben Chang,  played the role of a dark elf from the classic game and covered himself entirely in black paint. Chang then says, “this is going to be awesome yo,” Shirley, a Black character, replies, “So we’re just going to ignore that hate crime, huh?”

You can peep the reactions to Hulu’s ridiculous decision in the gallery below.

everyone: defund the police

everyone: no we said de—

everyone: that’s not wh—

everyone: what is happening

— every cop contribution is a policy failure (@aaronnarraph) June 28, 2020

I like how they think Black people don’t know our Golden Girls.

Dorothy, Rose, Sophia, and Blanche are the least problematic white women in all of television which is fairly impressive considering that show was on air in the goddamn mid-80s https://t.co/jPk8sJlh0w

Brands removing their problematic episodes feels like a way of equating Black Lives Matter with "cancel culture" to delegitimise the movement and court outrage. I haven't seen one placard in these marches saying "REMOVE EPISODE 323 OF THE GOLDEN GIRLS FROM HULU"

omg. okay, THEY WERE NOT EVEN IN BLACKFACE IN THAT EPISODE. i don't even need to read it to know which one they're talking about. Dorothy and the girls found out her son, Michael, was marrying a black woman. Blanche and Rose were wearing mud masks, PLEASE. #GoldenGirls

@Hulu has an all white Board of Directors but they removed a "Golden Girls" episode about ACCEPTING an interracial marriage – because of a mud mask? pic.twitter.com/Qx3bhTkcV0

This isn't even blackface. No Black person in America is offended by the joke in this episode.https://t.co/QkgSINoErM

Y’all pulled that Golden Girls episode that wasn’t even blackface. Right now it’s feels very much like the entertainment industry and culpable white people within it are using these performative gestures to get out of doing the work that needs to be done.

I know Hulu better put that Golden Girls episode back

doing everything in their power to make BLM look petty and annoying so people will shut up about it.. y’all know what we want and this is not it… https://t.co/UGKIPzw0JY

The fuck is wrong with these ppl man

I haven’t heard one person, not a one, have ‘Remove the episode of The Golden Girls, in which characters wear mud face masks ‘

Y’all doing everything else but change! https://t.co/bd9RRSrmKE

black people love the golden girls and never asked for this https://t.co/HKqqdOuT3j