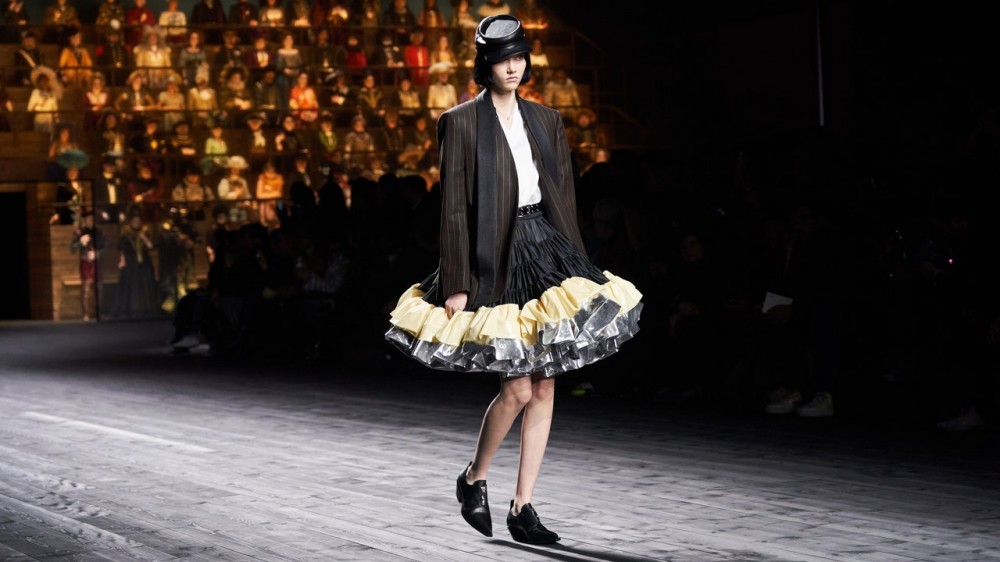 When the pandemic hit nearly a year ago, many of us thought fashion’s experiments with virtual runway shows and Zoom conferences would be a temporary hiccup, not our new reality. While IRL experiences will return, it’s unlikely they’ll be exactly as we remember them. That isn’t a bad thing; the first “post-pandemic” shows and events might be more exciting, more engaging, and more accessible than we used to think possible. Es Devlin, the artist and stage designer who collaborated with Nicolas Ghesquière on his fall 2020 Louis Vuitton show, put it this way: “Rather than grieve what we can no longer do, we should enjoy exploring new methods.”

Those new methods were the subject of a CES panel hosted by Nicole Phelps, the global director of Vogue Runway, with speakers including Devlin, Jeremy Scott, and Balenciaga CEO Cedric Charbit. Scott and Charbit were involved in two of 2020’s most successful digital experiments: Moschino’s marionette runway show and Balenciaga’s Afterworld video game. Their conversation with Devlin and Phelps ranged from the challenges of embracing new technology; “flipping the script” so the audience becomes the protagonist, not the models; and their predictions for fashion in 2021 and beyond. Devlin’s was particularly poetic: “I think the planet as protagonist is where we’re all going to be looking next, isn’t it?” she said. “I think we’ve realized we’re not the only protagonists around here.”

Below, five more lessons we learned from Vogue’s CES panels, and what they say about 2021.

Cristòbal Balenciaga Was an Innovator Before His Time

“Innovation and exploration is very much a part of who we are at Balenciaga,” Charbit said, reminding us of the ways Balenciaga has already incorporated technology into its shows, like the immersive video screens of spring 2019. He then revealed a fact we didn’t know: “In the 1950s, Cristòbal Balenciaga was taking videos of his shows instead of hosting them,” he said. “He was tired of the comments and the audience… It’s an interesting link because it shows that tech has been part of our DNA, and is very much something we’ve inherited.”

What would Cristòbal think of Afterworld? Charbit explained the “intense” process of developing the game in just six months, from creating the environments and avatars of Balenciaga models to actually making the game available across the globe. A standard runway show video requires around 2GB of cloud space; Balenciaga’s game needed 80GB. “The technical scope was very wide, and we knew very little—I want to be super humble about this,” he said. “[But] the user engagement jumped to a level I couldn’t even imagine—we had an average of five minutes per play. It was a major shift, moving an inactive audience [viewing a runway show or video] to an active audience.”

The active vs. inactive audience is an idea Devlin explored with Ghesquière for his fall 2020 Louis Vuitton show, the last one many of us attended pre-pandemic. They worked with costume designer Milena Canonero to create an “audience” of choral singers in historical garb, some of it dating back to the 15th century. “I wanted to imagine what could happen if the past looked at us,” Ghesquière said at the time. Years before that in 2015, Devlin and Ghesquière also collaborated on Series 3, an exhibition that invited you onto the runway “and went through a journey of Nicolas’s train of thought,” Devlin said. “We were interested in asking, what is a fashion show if there are no models and no audience, and the audience is the protagonist rather than the model?’” she said. “A collection is, as Jeremy [Scott] said, entertainment. But what’s entertaining is [a designer’s] mind, that’s what we’re being entertained by. How do you invite an audience to experience that?”

It’s of a piece with the shift happening in social media—namely TikTok—as people outside of the fashion industry begin to dictate trends, converse with designers, and become stars in their own right. That shift has been in the works for years, but was accelerated by the pandemic as we spent more time at home. “Seven years ago, when I started posting selfies on Instagram, I got a call from my president at Balmain asking, do you believe designers and luxury can be part of social media?” Rousteing said. “They didn’t really get what social media meant, and what inclusivity meant, and creating a community. Today, you have to be a part of it.”

Soon TikTok will be the non-negotiable platform determining a brand’s social success. Thoensen said 2020 saw more fashion houses and media companies, like Vogue, join the platform than ever. “TikTok offers an accessibility in fashion that I think has never been seen before,” he said. “Fashion has felt largely intimidating… and our platform feels participatory. Fashion has been a one-way conversation for so many years, whether it’s through media companies or fashion houses. Now what fashion has become, especially by way of TikTok, is a very two-way [conversation].”

The Difference Between Traditional Media and Social Media Is Overstated

Nnadi pointed out Vogue’s Met Gala Challenge as a winning example of how traditional media can “kick off” conversations with the broader fashion community. “We were engaging in this conversation that really highlighted what fashion is all about—it’s about self expression and authenticity, and I think that’s something we’re continuing to think about. Not only in our coverage, but in the tech product we’re developing for the site—bringing some of those capabilities onto a platform like Vogue.”

“People have a tendency to divide press from social media, and I think it’s [more like] two becoming one, for me,” Rousteing adds. “I think the press realized a [need] to start talking to the real world, and not be scared of changing the meaning of ‘luxury,’ because I think that was the problem for many years. [When I started at Balmain] I remember people saying, ‘is hip hop music luxury, is social media luxury, is selling online luxury?’ We have completely changed the meaning of luxury.”

The Key Words of 2021? Authenticity, Community, and Spontaneity

“The people doing fashion right on TikTok are embracing these ideas of community, of discovery, but also authenticity,” Thoensen added. “We’ve created an environment where fashion can feel highly personalized, and there’s this wonderful serendipity to what you can discover, where fans can lean in and [feel like they’re] part of a community. We’re starting to see things that are happening in this democratized environment brought forward into the fashion press [through coverage and trends], living amongst what has traditionally been couture or high fashion.”

Some designer brands have managed to create a feeling of authenticity on other social platforms, like Instagram and Facebook, but it’s arguably harder to “fake it” on TikTok. Whether brands are willing to take risks and be a bit more “unfiltered” on the platform is the big question. “We need to push into even more types of content [like TikTok], but it needs to feel authentic,” Rousteing insists. “TikTok is one of those platforms where you need to be really authentic and spontaneous. That is the future.”

Fashion Is Becoming More Like Entertainment, From TikTok to Streaming to Gaming

Scott would likely agree with Rousteing on the authenticity front. Always unfiltered and unafraid of risk, he was an early adopter of new technology in the early 2000s, when he mailed fashion video DVDs to editors and even made his own film, a campy, Dynasty-esque spoof called Starring, complete with his own red carpet premiere. “I’ve always thought of what I do as entertainment,” he said. “I’ve thought of my [work] in the same way as television, film, art, anything in pop culture that people enjoy. I’m very open to all other platforms. Certainly not Parler… But I of course love Netflix, and I think Amazon has a lot of potential in [combining] entertainment and commerce. They’re really trying to push that into a new realm.”

That takes us back to gaming, a form of entertainment that’s perhaps less familiar to most fashion folk. Charbit said the idea for Afterworld came long before 2020, but they rushed its development in light of the pandemic. “Gaming is what people do today—it’s revolutionized the entertainment industry, and we wanted to be part of it,” he says. “Video games can look very similar to a fashion show. It mixes the same elements: the visual, music, set design, and fashion… When you start a game and select your character, it’s like getting dressed in the morning. You put on your clothes and become the character you want to be that day.”

On that note, we may not even be thinking radically enough. “My son lives on Fortnight, and he lives in these skins [on the game],” Devlin said. “I don’t think he will ever buy clothes, because his physical body doesn’t need any clothes. He’s thinking about the skins for his virtual bodies. I think that is going to be a monumental generational shift.”

Will we all start buying virtual clothes in 2021? Even if it’s too soon for that, there’s a good chance designers will experiment with the idea in their upcoming collections. You’ll have to keep following along on Vogue Runway to find out.