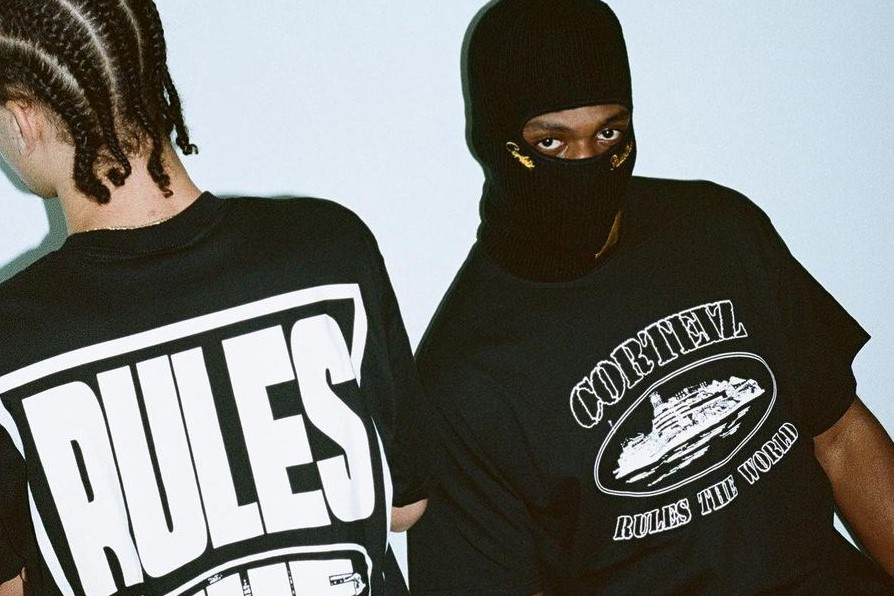 From dodging TFL inspectors to dressing Virgil Abloh at the Met Gala, the brand is dominating the M25 and beyond

Hernan Cortés was a medieval Spanish ‘explorer’ or conquistador who led the bloodthirsty expedition that was ultimately responsible for the fall of the Aztec Empire. In 1519, he marched into the middle of Mexico against orders, with almost non-existent military experience ‘in pursuit of adventure and riches’ in the New World. Once he arrived, he began to rally the indigenous tribes against each other, massacring some and making alliances with others, leaving a glistening trail of blood in his wake.

Considering how much violence the name holds, it’s ironic that in 2016, a young Black boy from West London would choose it for his new streetwear brand. In the midst of figuring life out while sleeping on his sister’s sofa, then-18-year-old Clint, founder of Corteiz (also known as CRTZ) decided he wanted to rule the world. Like Cortés, who’d found himself ‘constrained’ in his small, provincial town as a youth and ventured into the ‘unknown’ on his bloodthirsty crusade, Clint – who has no formal design or fashion qualifications – followed in his footsteps.

“Corteiz subverts (Cortés’ actions) to signify the ruthlessness of ruling your own world and taking what you want – when everything feels unattainable as a young Black man,” explains Kay, Clint’s childhood best friend and a core member of the ten-strong Corteiz team. “What Clint is doing is a form of activism in it’s own way – through resistance. Resisting people’s expectations of what a streetwear brand should be, as well as what he, as a young Black man, should be.”

Kay points to the brand’s now infamous Alcatraz logo, as seen on caps, tracksuits, and hoodies. The idea of imprisonment, whether physical or mental, is a recurring theme across Corteiz’s output. Elsewhere, one of the label’s latest drops includes a plain tee that reads “No comment” – a byproduct of the constant harassment Clint and Black men like him faced growing up. The infamous ‘RTW’ (Rules The World) slogan dares to look beyond the confines of the M25, or whatever small town its wearer may live in, proclaiming world domination and daring anyone to say otherwise. In short, Corteiz carries as much cultural value as it does aesthetic.

It might seem insane to plot domination from such humble beginnings, but Clint’s vision was clear and his hunger was relentless. “When this first started, way back in 2016, he was packaging orders in his mum’s front room. He was selling maybe 30 t-shirts a month, and that wasn’t easy,” Kay explains. He’d literally put his last penny into the brand, putting everything on the line to pursue his dream without as much as a back-up plan. It feels almost poetic that his gamble paid off, as the brand rose meteorically within a few short years.

Although the extremely online hypebeast era has generated a bloodthirsty appetite for limited edition items, the mass hysteria behind Corteiz is incomparable. The brand has cleverly deployed social media like few others, building a separate ‘leaks’ account with over 26k followers that previews drops and teases collaborations. The eventual ‘drops’ for these long-awaited collections are sudden and without warning, with Clint often notifying fans through his personal Twitter account of 21.6k followers.

This, as well as the organic relationship with clients, not only builds anticipation for subsequent drops, but also a loyal and engaged fanbase that will buy anything at the drop of a penny. This is what elevates and differentiates Corteiz into a lifestyle brand more than anything – customers buy into the idea of ownership, freedom, and rebellion more than they do a pair of tracksuit bottoms.

“What Clint is doing is a form of activism in it’s own way – through resistance. Resisting people’s expectations of what a streetwear brand should be, as well as what he, as a young Black man, should be” – Kay, core Corteiz team member

Go to any party in London and you’d be hard-pressed not to see at least a few people repping the Alcatraz cap, logo-print tracksuit, RTW-emblazoned tee, or in many cases, all three. From Stormzy wearing it onstage at Reading and Leeds Festival, to Unknown T kitted out in full Corteiz for a music video, there’s no shortage of famous faces throwing on pieces by the burgeoning label. However, none felt more symbolic than Virgil Abloh wearing ‘RTW’ socks to the 2021 Met Gala, the most prestigious fashion event in the world.

Renowned for his consistent and constant championing of young Black creatives and wider culture, it was no surprise that the late designer had caught on to London’s worst kept secret, after Corteiz went global (beyond the UK, Paris is its primary shipping destination). In true RTW fashion, Clint had gone from his sister’s sofa to the world, with the rising designer forming a supportive friendship with Abloh before his untimely and tragic passing.

The brand’s popularity is as much centred on Clint and his crew as the clothes they make. Many fans admit that they were initially aware and attracted to the brand due to the community feel of the clothes, as well as the man behind it. “When I first heard of the label in around 2017, I wasn’t making much money but still wanted to support it as Clint seemed really authentic and likeable,” explains East Londoner Olivia Taylar, 23. “It was a special secret, so if you saw somebody wearing Corteiz when you were out and about, you sort of knew that they knew what was cool.”

As London’s underground creative scene increasingly began to embrace Corteiz, the brand cultivated a community of like-minded individuals across music, fashion, and culture. Nothing best exemplifies this communal, FUBU spirit of Corteiz more than the December 2019 pop-up collaboration with Nigeria-based streetwear brand and skate collective, Motherlan. “They were simply on the same wavelength that we’re on,” says Kay. These special edition tees, which were rebranded from ‘Beware of CRTZ’ to ‘Beware of 419’, were a nod to the section of Nigerian Criminal Code that addresses fraud and were given away for free at a local festival.

With other drops selling out in a matter of minutes, Corteiz also prides itself on its equality of access. Where many streetwear labels gift rappers, footballers, and influencers in exchange for exposure on their social media accounts, every visible figure or celebrity has had to wait for a password to the store preceding a drop and race to buy it like everyone else – even the founder of Off-White and creative director of Louis Vuitton. The community around the brand is no accident, arguably both a product and a result of the deliberate purpose of every single detail, down to the joggers being designed to sit perfectly on a pair of Nike Air Force 1s, otherwise known as the unofficial shoe of London.

It’s this minute attention to detail that initially attracted Korby, 22, and Chester, 23, from London, to the brand. “As well as supporting a young Black man who was making cool clothes, it was his attention to detail, down to the littlest things that I truly appreciated as a creative myself,” Chester explains. This boils down to the packaging – each Corteiz customer receives with their package a travel card signed with their name eg: ‘Rahel RTW’. These travelcards – and there are hundreds if not thousands of them – are Clint’s own that’s kept over the years when he travelled around London with a £2.80 child day travelcard, evading ticket inspectors at every turn.

Both also point to the ski mask (which also doubles up as a beanie), launched in 2017, as the piece that initially drew their attention. The now-iconic style is bright yellow with the logo emblazoned on the side, a piece that Kay also points to as one of the first to ignite real engagement and put the brand on notice. In subverting and reclaiming streetwear for what it is – the uniform of the Black, young, and working class – the balaclava is an item, like the hoodie, that has been demonised and criminalised more so when on Black bodies. Further considering the socio-political context of drill music’s criminalisation and the need for rappers to wear ski masks in order to continue working, Clint and by extension, Corteiz, once again subvert.

“There are 16 year old kids somewhere in Shropshire saving up their pocket money to buy a pair of joggers or a hoodie and feel like they’re part of something bigger than them, and that opportunity is being stolen from them because somebody wants to be greedy” – Kay

Corteiz’s no-nonsense approach also extends to tackling the rampant reseller culture that thrives off the brand’s high demand and limited supply. Resellers became more widespread during the brand’s boom in popularity during the 2020 lockdown, and Corteiz wants no part in fuelling it. With resellers often advertising their sold out goods immediately after purchase and before delivery, Clint is renowned for publicly cancelling their orders, and Corteiz have produced a tongue-in-cheek trailer pointing to the brand’s issue with it. “There are 16 year old kids somewhere in Shropshire saving up their pocket money to buy a pair of joggers or a hoodie and feel like they’re part of something bigger than them, and that opportunity is being stolen from them because somebody wants to be greedy,” explains Kay.

The community of Corteiz may at times seem like a cult, with the ferocious devotion displayed both on and offline – a GTA style giveaway in central London this summer saw hordes of teenagers running en masse in a treasure-hunt style distribution with Corteiz staff throwing t-shirts out. However, it’s irrefutable that from a front room in North West London, one man has managed to ignite a global community of rulebreakers and limitless thinkers. Having already expanded its horizons after throwing events in collaboration with BONE SODA, the launch of RULESTHEWORLDRECORDS signifies a foray into music with a collaborative release featuring French drill rapper Freeze Corleone. With all this in the works and promise of even more to come, it’s plain to see that Corteiz does indeed RTW.