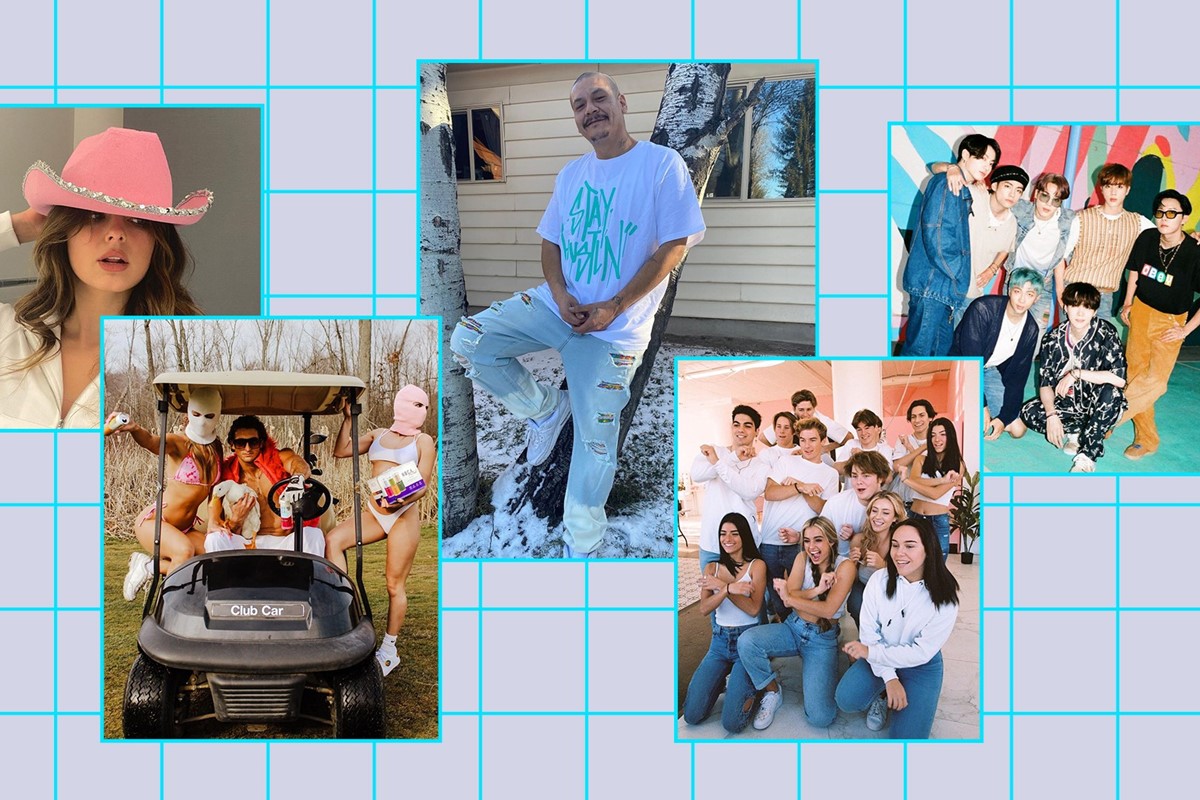 Some years give you nothing, fly by maybe a little too smoothly. In a century’s time who will remember 2019? Absolutely no one. 2020, however, will live in infamy. The story of the year was coronavirus. White knuckling through the quar we rediscovered social media as a connector, not a promoter. YouTube, Instagram, and Twitter boomed. We tried out some new things with Zoom, with Houseparty, with Clubhouse. People declared Instagram dead after Zuckerberg replaced the notifications button with a shopping bag. People declared Twitter dead when they rolled out…fleets? And everyone rushed to try TikTok when Donald Trump woke up sweaty and cranky one night and tweeted out that he was going to ban it. Of all the apps TikTok was the clear winner.

If Zoom was work, dancing grannies on TikTok felt like play. If Instagram’s autobiographical purview was ill-suited to lockdown life – really no one wants to see your sourdough starter – TikTok’s purpose was still ambiguous enough that enterprising teens could find entertaining yet informative ways to create PSA videographics. As movie production ground to a halt, entertainment began being produced in the home. It was a chance not just to see your frenemies living their Best Life in Belize, but a little window into what they thought and how they actually lived. Lo-fi media was fun. We couldn’t look away. Josh Constine, a San Francisco venture capitalist claims the addictive quality of the TikTok format is due to its content density. The definition of this variable is almost too absurd to repeat. But all the same, it’s entirely spot on: content density is “the entertainment value of a piece of content divided by its length – how many oohs, ahhs, huhs, or hahas per second”.

My friends and I quickly got the idea. Sunbathing in a WeHo backyard I would flick through TikToks from @tooturnttony with pod friends. From what we could gather he was an out of work aspiring male model who had fled New York City when cater-waitering jobs dried up in March. He landed somewhere in Michigan at his parents house with his inexplicable pet ducks. We would watch him get shredded dead lifting in his sister’s crop tops, rip a beer bong with his grandma, shotgun White Claws with his dad and get into incoherent arguments with his equally – or possibly more – drunk mother. Checking back in on @tooturnttony, I find he now has 5.6M followers, which is in and of itself a very TikTok thing. Someone can go from random to very much a thing in a shockingly short timespan. Content density is a formula for content acceleration. Blink and you’ll miss someone’s ascent to internet fame.

The viral moment of the year was @420doggface208. If you haven’t seen the video of a man longboarding along a highway sipping on a 64 fluid ounce plastic bottle of Cran-Raspberry Ocean Spray while Fleetwood Mac’s “Dreams” plays, I doubt you’ve been online. The video clocked 73 million views and 11 million likes. Its ripples included pushing the classic anthem back on the Billboard Hot 100 chart (peaking at number 14); Ocean Spray gifted him a truck; and the sales from Nathan Apodaca’s merch store (that’s @420doggface208’s legal name) brought in enough revenue for him to buy a house. It was a clout fairytale. Some dude in Idaho whose car had broken down skateboarded to his job at a potato warehouse. He went from living in an RV in his brother’s driveway to meme of the year.

When you think about it, it’s equal parts “Good for him!” and “Jesus Christ, America!” Scrolling LinkedIn, I see an executive coach exhorting everyone to follow Nathan’s example: be authentic online and someday you too can be a meme. This after all is the new American Dream. The meritocracy meets credentialism of the late 2010s feels decidedly last decade. Creative Directors feel as over as the Experience Economy and the Instagram Aesthetic. That’s not to say there still aren’t a lot of them. But my agencyhead friends seemed distinctly depressed this year. The creative class plugged into ten straight hours of Zoom meetings, carefully curating It Books, tasteful goopy ceramics, and succulents behind them while the gig class delivered their Doordash, their Amazon Prime, their Saucey, their Eaze. Financially, they did fine and certainly can’t complain. Spiritually, anyone with enough brain cells left to scroll through TikTok’s For You Page before the Ambien kicked in could see the writing was on the wall – the creative class’ days of cultural domination were numbered.

2020 was the year of the Hype House. Both the actual one, founded by Chase Hudson in Los Angeles, and all of the generic copycats that dot the Hollywood Hills, and now spread from Las Vegas to Atlanta to England to Spain. Alpha House, Byte Squad, Clubhouse Beverly Hills, Clubhouse Europe, Clubhouse For The Boys, Dance Dome LA, Drip Crib, Fenty Beauty House, French House, Girls in the Valley, Glam House, GO House, Gotham House, Halo House, Honey House, The House Nobody Asked For, Jet House, Kids Next Door, Not a Content House, Shluv House, Sway House, Top Talent House, Unxpectd House, Vault House, Vibe Crew, Wave House, and on and on and on. According to Jake Paul (who claims his Team 10 House is the first of this frat house, management company, talent agency hybrid) there are now over 500. According to the The New York Times, Chinese pharmaceutical companies are among the corporate investors betting on this new model of media production.

What we are witnessing is the rise of the streamer class: gonzo internet personalities whose content prioritises an improvisational behind-the-scenes style. When Vin Diesel invited Sway House’s Noah Beck to the Dominican Republic to make up a TikTok dance for his pop song, it wasn’t because Noah Beck has Juilliard training. His talent is being charismatic and cute on camera. When Mark Waters (director of Freaky Friday and Mean Girls) brought on Addison Rae to co-star with Rachel Leigh Cook in the gender-swapped reboot of She’s All That, titled He’s All That, acting talent figures as prominently in studio calculation as the huge audience the TikToker brings.

“Working for brands was so last decade, monetising content is the future”

Watching teens romp and cavort in the retro-fitted nouveau-luxe vibe of a Mediterranean mansion feels fresher and more exciting than the creative class’ mid-century modern Zoom prison. Chiropractically challenged Millennials are taking note: maybe there is more to life than meetings and decks? Hence you have instances like Honey House: a hype house populated by consultants, mindset coaches, and brand strategists who are shrewdly transitioning from creatives to content. There’s a post-internet to podcast pipeline, where former net artists become streamers – see: Brad Troemel, Josh Citarella, New Models in Berlin. There’s the friend of the pod to podcast pipeline – see: every lurker from Dimes Square starting an OnlyFans, a Substack, or a Patreon. (Full disclosure: this also includes me. I have a Substack.) Professionals are shooting their shot, too – see: Jack Wagner and partner, Brandon Wardell’s Yeah, But Still, or Chris Black and Jason Stewart’s quarantine hit, How Long Gone. Working for brands was so last decade, monetizing content is the future.

In 2020, the internet became bigger than the world. When Trump tried to ban TikTok, the endeavor quickly imploded and only succeeded in provoking the BTS Army to troll the e-ticketing of Trump 2020 campaign events. Earlier in the year, a project for a media start-up lead me into an odd corner of Are.na – an image research app that’s kind of like a graphic designer’s version of Pinterest. I was looking at the cover illustrations of educational children’s books from the 90s: stark white covers, elegant minimal black serif font, delicately drawn photorealistic illustrations. One covering technology had a fever dream computer screen; tropical flowers, lush foliage, a waterfall, all compounded on one another, everting out into the user’s deskspace. It struck me as so decidedly retro: if in my childhood, the internet was a window on the world, in my adulthood the internet is a window into another world.

We’ve all ascended to the MacBook astral plane. Bodies without apps. Consciousness split between social media, streaming content, and messaging. We may be stuck inside our houses, but we are not stuck inside our heads. Instead of events, we have media events: Tiger King and Emily in Paris and Queen’s Gambit – shows to stream, shows to meme. The US election and the Black Lives Matter protests draw eyeballs – and the outcomes of the first digital-first social movement and presidential election make people think – perhaps the internet has turned a corner. Trolls for once aren’t winning the day. The through line of 2020 seems to be that we shouldn’t expect the expected. With a month and a half to New Years, it looks as if 2021 might give us a break. We’ll have Sleepy Joe as president and soon enough all take Dolly Parton’s vaccine (yes, she donated money to the effort). After an over-and under-stimulating 2020, everyone is ready for a new year that’s a little less exciting and perhaps a little less indoors.