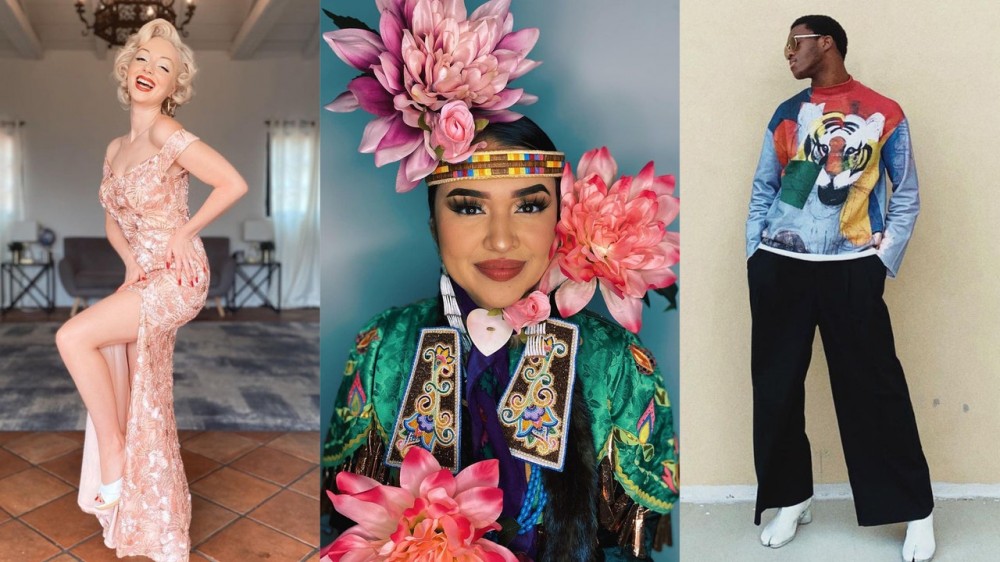 Whether you’re on TikTok or not, the app and its minute-long videos have become inescapable this year. Despite the possibility of being banned in the U.S. earlier this year, TikTok persevered, and now has over 100 million users in the U.S. alone. Though it’s primarily associated with teens, it’s impact on the fashion industry is already well underway. Trendsetters like Bella Hadid are now posting on TikTok, labels including Saint Laurent and Louis Vuitton are live-streaming their fashion shows on it, and designers, models, and other talent are even being discovered through the creative TikTok videos they post.

While we were all stuck at home this year, TikTok became the outlet for self-expression—a place where we could partake in dance challenges, practice our transitions, and share our personal style. Though TikTok is marked by its creative, loose content, influencers on TikTok have seen how having a following can translate into a career boost. Take Wisdom Kaye, TikTok’s best-dressed guy. He has over 4 million fans, and in the past year he’s been signed to IMG Models, and now works with brands such as Balmain and Dior.

While influencers as fashion plates is not a new concept (thanks to bloggers and Instagram), it is fairly new territory for TikTok creators. Kudzi Chikumbu, the director of creator community at TikTok, says the appeal of TikTok creators is their authentic content; users post videos that are more unfiltered than, say, those of Instagram stars, whose posts have to be perfectly composed and lit to perfection. “Fashion is legit on TikTok,” Chikumbu says. “It goes beyond the outfits and into creative expression.  TikTok is a place for joy, and it’s giving the fashion industry a whole new way of showcasing their art and personality.”

Below, five key ways that TikTok changed the fashion game this year.

1. TikTok is taking over fashion week.

TikTok stars began to trickle into the fashion world in 2019, when Noen Eubanks became the face of Celine. Then in February, Charli D’Amelio, who has a whopping 103 million followers on the app, sat front row at Prada. The moment was reminiscent of when bloggers and YouTubers started to make their fashion week debuts in 2009. Surely, we’ll see more TikTok stars attending shows in coming years. But until then, brands such as Prada, Louis Vuitton, and Saint Laurent have begun live-streaming their shows on the app. TikTok says these livestreams in September brought in over 3 million views.

2. Models are now being scouted on TikTok.

IMG Models, one of the biggest modeling agencies in the world, is increasingly looking to the app for fresh faces. They’ve already signed Wisdom Kaye and Kennedy Jardine, who have both forayed into modeling from TikTok.

“TikTok has been a great place for us in discovering the next generation of IMG stars,” says Jeni Rose, the senior vice president at IMG. “Unlike other social media platforms, a lot of the content remains unfiltered or unedited. That, coupled with a predominantly video-based format, allows us to quickly get a glimpse of someone’s personality, how they interact with others, and what their interests and values are within seconds.”

Rose says TikTok also allows models to be more easily noticed than ever before. “TikTok allows us to connect with potential new faces without them having to travel or spend money on portfolios or test shoots,” says Rose. “With TikTok, not only are we able to scout every corner of the globe from the comfort of our own homes, but we are tapping into exciting talent pools in new and interesting ways.”

3. Designers are sharing their creative process on TikTok.

Fashion designers may be busy creating their latest collections, but they’re finding more and more time to share their process on TikTok. “You’re starting to see fashion people show their personalities [on the app],” says Chikumbu.  “People really want to learn about fashion and the fashion industry as a whole.” Designers such as Simon Porte Jacquemus, Balmain’s Olivier Rousteing have gotten on board. Rousteing is a TikTok regular, decking himself out in the brand’s latest designs while documenting his day at the office. “[Olivier] shows clothes on his account, but he also shows [himself] sketching and making the clothes with his team and working out at home,” says Chikumbu. Jacquemus also uses the app creatively, creating dreamy, beachy posts that fits into the aesthetic of his brand.

The smartest brands are the ones who embrace and engage with TikTok trends. Gucci, for instance, partook in the #GucciModelChallenge by reposting creators’ posts (the challenge has over 210 million views, and asks users to pile a bunch of random items on top of each other, creating an eclectic, Gucci-esque look). JW Anderson also posted a tutorial on how to crochet its patchwork cardigan, worn by Harry Styles, at home—a piece that went viral on the app.

4. Fashion brands are being born on TikTok—especially sustainable ones.

TikTok is more than just a place for content—it’s becoming a place where businesses are born. Sustainable fashion brands, in particular, have been gaining popularity on TikTok. The hashtags #upcycling and #vintage have a combined 8 billion views, and a scroll through these hashtagged shows that Gen Z is completely obsessed with thrifting or repurposing clothing. (@blazedandglazed, for instance, documents finds from estate sales). As a result, repurposed or upcycled clothing brands are gaining traction.

One of the biggest eco brands on TikTok is @vintagestockreserve, which gives old clothes new life by dying, splicing, or mending vintage pieces. It’s run by 21-year-old Tommy Groenendijk and 22-year-old Jordan Deery, two friends in Land O’ Lakes, Florida, and has amassed 1.8 million followers.“I’m in love with being able to create something from nothing,” Deery told Vogue back in October. “Plus, it reduces the massive amount of waste that the fashion industry is responsible for.” Wearth London, which creates goods using eco-friendly materials and has 47,00 followers, also posts TikTok videos on how to live more sustainably, offering easy tips to be more eco-minded.

Were you shocked when Y2K fashion had a surprise comeback this year? You can, in part, thank TikTok for that. This year, users on the app became completely obsessed with 2000s fashion. The hashtag #Y2KFashion has over 58 million hits and counting, according to TikTok. There was a ripple effect into the mainstream fashion industry: Brands such as Juicy Couture, the tracksuiter to the stars in the early-aughts, and Von Dutch even revived themselves from the dead and re-launched due to popular demand. Sure, there may be other factors at hand here—runways and top models also paid homage to the 2000s this year—but when a look starts trending on TikTok, the fashion industry takes notice. Remember the strawberry dress that went viral earlier this year, and everyone suddenly had to have it? TikTok wearers played a huge role in its popularity.

In a more general sense, we’re also seeing an increasing appetite for trend styling videos on TikTok, and how users are incorporating trends into their wardrobes. Maha Gondal (@moxeb) and Nemah Hasan (@nemahsis), two friends located in Toronto, are two Muslim women who take the latest runway trends and make it work for their modest style. Combined, they have over 380,000 followers. 51-year-old magazine editor Karina Vigier—who has over 190,00 followers—also takes the latest trends and gives them a mature style twist, showing that fashion trends have no age limit. Chikumbu says this creative approach is what makes the app special. “It’s really cool to see creators push themselves to make those kinds of videos,” says Chikumbu. “It’s a short video, but it takes a lot of effort. TikTok allows you to do that easily—and that’s why creativity is being unleashed.”