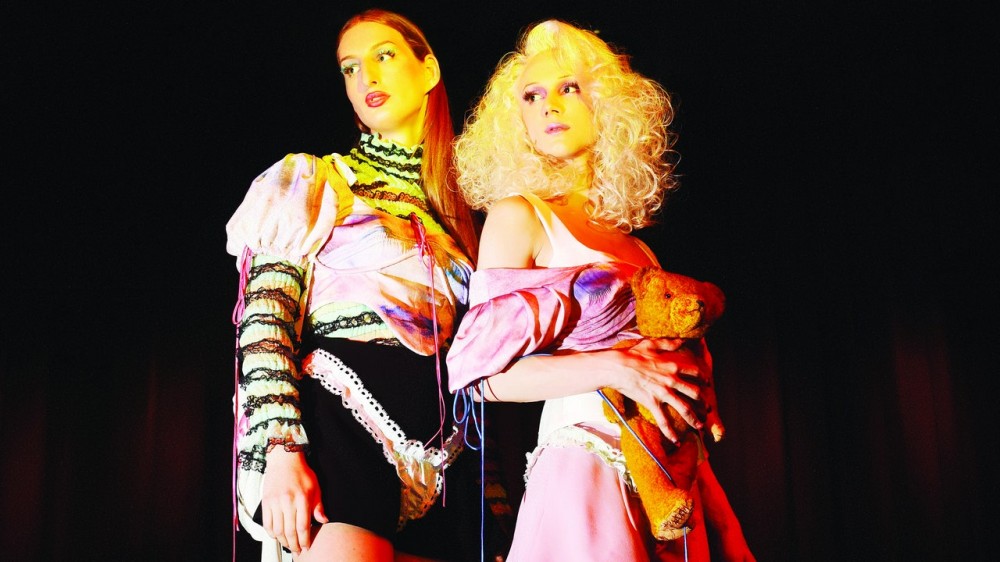 Long Kawaii nails covered in heart shaped stones, white fluffy kittens, and paper doll-like figurines are just a few of the surreally hyper-feminine images found in the emerging Hungarian designer Fabian Kis-Juhasz’s first zine. Titled Audition, the project highlights the trans community of her native Hungary. Kis-Juhasz was inspired to highlight the beauty of the trans community in Hungary after the government announced Section 33 in the summer of 2020, which bans transgender people from having their gender identity recognized before the law.

“Growing up as a gender non-conforming trans person, I never felt like I had a future in Hungary. I didn’t know that there was a community, quite frankly, I didn’t even know what trans meant or that you can transition because it was simply never discussed,” she says. “Coming across a project or a zine like this as a teenager would have changed a lot of things for me.”

Flipping through Audition, there are flat lays of Kis-Juhasz’s designs as well rich details, such as manicures lit with a flame, an arm covered in ruffled fabrics reaching for a lonely pair of heels and mascara, as well as group shots of the models seated in vintage theater seats or on stage. The designer makes an appearance with a self-portrait, while wearing a white gown. Paragraphs of text punctuate the zine with commentary on femininity, the body, and clothing.

The designer, who studied at Royal College of Art in London and has shown collections at fashion week in Budapest and Tokyo since 2018, decided to make the zine after meeting photographer Hanna Redling, who often documents feminine and gender-blurring imagery in Hungary. “We wanted to create something more meaningful than just an editorial or a campaign,” explains Kis-Juhasz. “Eventually everything just fell in place and the project was born.” The team behind Audition will be donating all the profits to www.transvanilla.hu which is a community that provides resources and guidance for Hungraian transgender people.

Aesthetically, the imagery of the zine speaks to the Kis-Juhasz’s core ethos of a saccharine world that echos and calls into question the traditional idea of femininity—think: lace gowns with prints of the designer’s own makeup wiped off, bustier corsets with attached nipples or sheer Jack O'Lantern gowns layered over frilled, striped black and white bodysuits. The cast was photographed in an old theater, where everyone could stand on the stage and ‘perform’ in whatever way they wanted. Kis-Juhasz’s spring 2021 collection is on full display, as each page shows a member from the trans community wearing this season’s ruffled bodysuits, sheer gowns, and sculpted corsets.

In the collection, Kis-Juhasz focused on some of the ideas she’d been exploring in past seasons, such as the idea of subversive shapewear and costumes. “I wanted the pictures to transport the viewer but to also have an air of familiarity to them, to create a surreal magical space but to also capture the women in an honest way, to make their existence feel familiar,” explains Redling. “The pictures are largely about the power of unity and the safety of a community and the rest is just there to help the viewer let go of any preconceived notions of normalcy that alienates these women.”

One of the most challenging aspects of producing the zine was finding the community. “The casting process was quite hard, as trans people in Hungary aren’t trying to be visibly trans; they just want to pass and lead a safe life or move abroad if it’s possible,” says Kis-Juhasz. “Rahel is a friend of mine who I have known since she started her transition and I’ve worked with her many times before. Amadea was, to my knowledge, was the first public figure to come out as trans. She had a popular Youtube channel before she came out and she was heavily featured in the media around that time.” Tamara and Elvira, shown in the zine, are the first married same-sex transgender couple in Hungary.

All the models are out in Hungary, which Kis-Juhasz says is a privilege in and of itself. “The people who are out and are publicly speaking for their community are the ones who were fortunate enough to make it to that position and so their experiences might not necessarily reflect what others go through,” she says.

Elvira, one of the zine’s models who is shown in a cushy red theater seat beside her wife, both of them wearing sheer purple, black and orange frilly see-through gowns, adds that the cast didn’t have reservations about being photographed for the project, despite the recent legislation. “There is definitely an understandable tendency for trans women to stay in the closet and to not be open about their identities. We believe this is counterproductive,” she says. “If they can’t see us, then they can deny our existence. If we are fighting for equality, we have to show our faces, otherwise it’s pointless. Obviously it comes with a high number of risks, but we think they are worth taking.”

One of the most important things for Kis-Juhasz was to showcase the wide range of trans identities. “Trans visibility has had a big rise in fashion over the last couple of years, and you see gorgeous girls like Teddy Quinlivan and Hunter Schafer book these major jobs and break these glass ceilings, but that’s not the reality for most trans women,” adds Kis-Juhasz. “Passing and looking feminine is a very divisive subject in the trans community. Most trans women, especially from previous generations, didn’t have the privilege to begin their transition before puberty or to afford HRT in general. We need to normalize and validate the identities of trans women who chose not to, or didn’t have the means to medically transition.”

Throughout the zine, the text touches on topics such as performity and gender theory. In the introduction Kis-Juhasz muses on gender and trans body. The scholastic bent aligns perfectly with Kis-Juhasz’s designs, as she relies on academic research and feminist theory when dreaming up new collections. The Budapest-based curator Zsu Zsuro, who recently organized Queer Budapest, an art show that delved into contemporary queer culture in Hungary, also contributed text in the zine. In the intro of Audition, Kis-Juhasz muses on why unisex clothing is usually more masculine than feminine, and how femininity can threaten masculinity. “Femininity could corrupt masculinity,” she proclaims. “Because it was created to be subservient, adapting feminine traits to a masculine identity would be considered degrading, shameful. It is the ultimate treason!”

But even without the text, everything from the silhouettes to the color palettes and makeup seen on Kis-Juhasz’s models makes one ponder societal gender roles. “Clothes are one of the ultimate tools we use to perform our identities and I built my brand around this idea,” says Kis-Juhasz. “It just makes so much sense for me to make clothes that help elevate someone's femininity.”