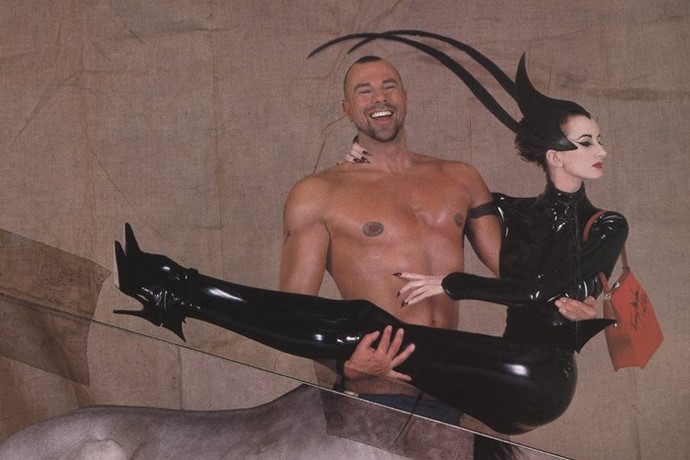 Manfred Thierry Mugler, who died on Sunday January 24, never truly lived in the present. He was a futurist, wielding his buckwild imagination to shatter the borders of couture, pop culture, and womanhood. “We are devastated to announce the passing of Mr Manfred Thierry Mugler,” read an announcement from the designer’s team on Instagram, which, according to a spokesperson was unexpected. “May his soul Rest In Peace.”

Born in Strasbourg, France, in December 1948, Mugler was a dancer before he was a designer, joining the ballet corps of the Opéra National du Rhin at the age of 14. He had a “very hard time living in the world that is imposed upon us,” as he revealed on his website. “I dreamed of creating another world, to my scale. One that was my own.” For the next six years, Mugler lived on the stage, before attending the Kunstgewerbeschule, an arts school in Alsace. He moved to Paris in 1968, aged 20, to work as a window dresser for the boutique Gudule, and began designing on the side, creating his first label Café de Paris in 1973. Backdropped by designers like Azzedine Alaïa, who took a sledgehammer to all the prissy silhouettes which had previously dominated womenswear, in 1978, Mugler opened his first boutique at the Places des Victoires and simultaneously launched his men’s line.

He frequently collaborated with drag artists, trans models, and club kids, not to mention Naomi Campbell in one of those chrome and fiberglass car bodies, Cindy Crawford in a bondage bodysuit with nipple tassels, Linda Evangelista in a sequinned wig and gown, and Eva Herzigova in a plume of red feathers. Yet the designer’s love of vampy, sexed-up, film noir looks were deemed by some critics to be sexist, particularly his penchant for corsetry. Unlike his predecessors, though, Mugler’s designs did not oppress – they were symbols of power, control, and strength, expressed in metal, vinyl, latex, fake fur and diamantes, which transformed his women into something fantastical and trans-species.

Though his perfume venture, Angel, was wildly popular, by 2003 the Mugler maison was shuttered due to poor finances, sending the designer underground. As he stepped back from the catwalk, he completely disappeared from public view, reemerging four years later as Manfred, having embraced bodybuilding and plastic surgery, embodying a living, breathing Tom of Finland sketch. He told the New York Times in 2010 that he did not want to be recognised. “You don’t want to be reminded that you did this or you did that. It is disturbing,” he said. Off the runway, it would seem he had become his own muse and model, turning his gaze inwards as he upgraded his body into something extra-human or cyborgian.

Despite formally retiring, Mugler’s warrior women dotted the landscape of entertainment until his death. His work with Beyoncé, Lady Gaga, Cardi B, and Kim Kardashian repeatedly burst the banks of pop culture, forging some of the most recognisable and turbocharged imagery of contemporary culture. Be it on Sasha Fierce or at the Met Gala, Mugler’s taste for unbridled grandeur created breathtaking characters that merged the mythology of Old Hollywood with the ever-accelerating possibilities of science fiction. In the past couple of years, he offered up Cardi B as Botticelli’s Venus and Kim Kardashian as his own Cowbot creation, sparking a major renaissance in his designs among a younger generation. So much so that he was set to announce a series of upcoming collaborations, dovetailing with an exhibition in Paris, which is currently showcasing Mugler’s most definitive looks.

It was Casey Cadwallader, who has been at the helm of Mugler since 2017, who led the memorials last night. “Manfred, I am so honored to have known you and to work within your beautiful world. You changed our perception of beauty, of confidence, of representation and self empowerment. Your legacy is something I carry with me in everything I do. Thank you.” As the industry begins to take stock of the life and impact of Mugler, whose passing comes too soon after André Leon Talley, Virgil Abloh, and Alber Elbaz, we at Dazed are deeply saddened to lose such a foundational figure. Our thoughts and condolences are with his family, friends, and all who loved him – as well as anyone who ever felt inspired by his imagination.