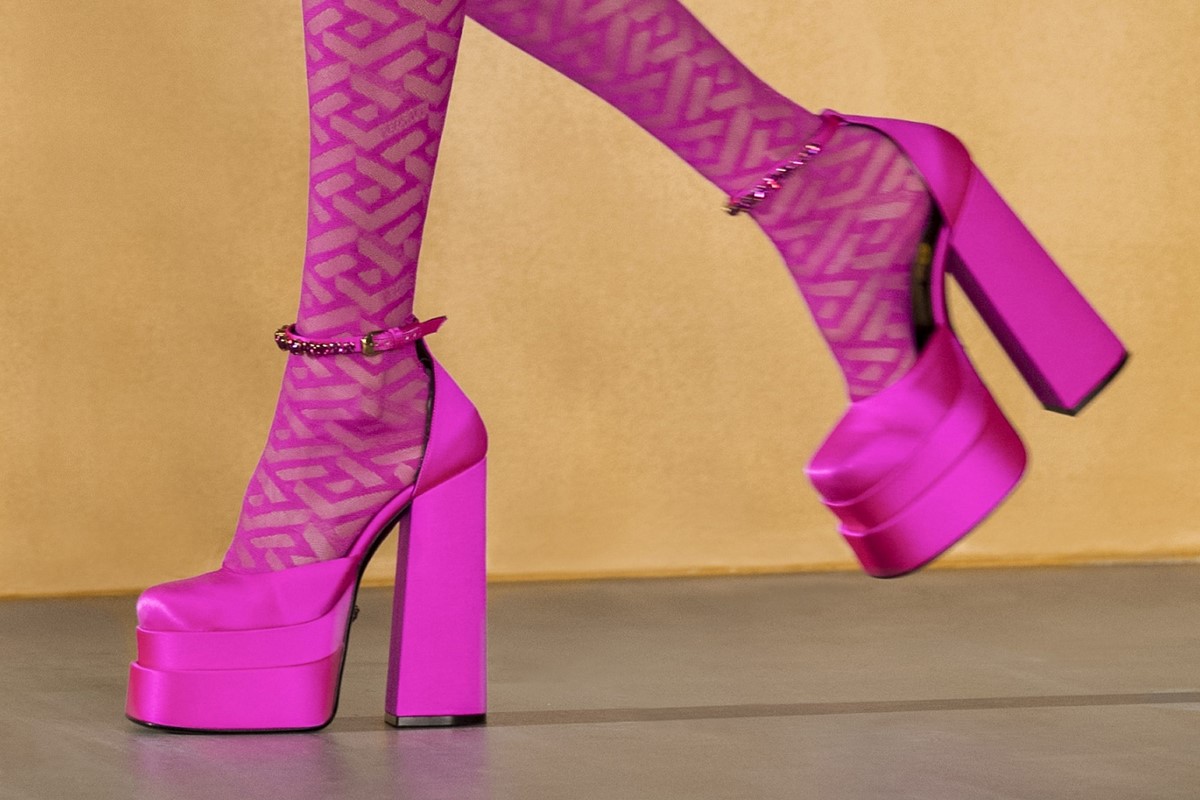 If there’s one piece of footwear that’s seen us through the pandemic, it’s the Croc. From job interviews to virtual dates, pub quizzes to parties, Zoom has seen off the need to actually make any kind of effort when it comes to our bottom halves – up top, statement earrings and collars might run the show, but downstairs it’s all about comfort. And what could be more comfortable than a moulded rubber shoe that makes it feel like you’re walking on air?

That’s why what’s happening on the runway feels a little out of step with our current times. Across all four fashion capitals and beyond, designers are cranking up the dial when it comes to their footwear. Whether it’s bulbous gloss wedges at Givenchy, Versace’s towering platform Mary-Janes, Rick Owens’ ultra-chunky flatforms, or Schiaparelli’s surrealist toe boots – for AW21, sky-high heels were hard to miss.

So why now? An obvious answer would be an almost palpable return to normality. As lockdowns lift and the COVID vaccine rollout continues at pace, Zoom parties will *hopefully* become IRL gatherings someday soon – with platforms signalling fantasies of high glamour, post-pandemic partying, and excess. But beyond car-to-bar nights out – given said heels don’t really lend themselves to legging it for the last tube home – their return to the runway could also have a lot to do with the state of the economy.

No one needs reminding that we’re currently in the midst of a global economic crisis. The IMF estimates that the global economy shrunk by 4.4 per cent in 2020, which is the worst decline since the Great Depression in the 1930s. Back then, as stocks began dipping, heel heights started soaring – in much the same way as the ones rolling out on the catwalk seem to be right now.

“We’ve seen some of the most inventive women’s shoes in terms of height and complexity of design around times of economic and social crisis,” explains Elizabeth Semmelhack, author of Heights of Fashion: A History of the Elevated Shoe. Published as the 2008 got underway, Semmelhack’s research led her back to the dawn of the Great Depression – when the platform shoe was reintroduced for the first time since the 17th century – and right through the 20th century, where she recognised a trend.

With heels dropping after the Second World War came to a close, they stomped back into fashion in the 70s – which is the decade that most of us likely associate with OTT platforms. During this decade, both men and women donned footwear that added height to their step. The hedonistic heyday of glam-rock, Studio 54, and Ziggy Stardust and his Spiders from Mars were set against the social economic background of the oil crisis and the Vietnam War – once again, platforms reigned during a period of socio-economic tension.

By the time the 2008 recession rolled around, towering heels strutted back into the spotlight once more. “I noticed just how high the heels were getting, but also how ambitious from a design sense,” Semmelhack says. From Tumblr teens and prototype influencers rocking Jeffrey Campbell’s vertiginous Lita boots outside fashion shows, to Lady Gaga in McQueen’s otherworldly armadillos, the plunging stock markets once again increased our desire to be elevated from the ground. “Wearing a very noticeable, extreme form of footwear is also economically more achievable than an entire outfit from top to bottom,” the author theorises. “Investing in a less expensive – albeit still pricey – pair of noticeable designer shoes is a way of refreshing your overall outfit and showing you’re a part of fashion.”

This is not the first time that fashion trends have been linked to the economy. In 1925 economist George Taylor established the skirt length theory, suggesting that shorter hemlines indicate an approaching period of economic prosperity whereas longer skirts appear when we are heading into a recession.

However, many have since picked holes in this theory. Anna-Sophie Hartvigsen, co-founder of Female Invest, believes that such theories are unproven and outdated. “The popularity of the skirt length theory can be seen as a manifestation of lacking financial education,” she says. “While single examples can always be found, runway trends are not acknowledged as a tool for financial analysis.”

Despite the theory not holding up as a straightforward correlation for economists to study, fashion in general – and heel heights and skirt lengths in particular – can still tell us a lot about the times we are living in. As far as hemlines go, the AW21 collections were a mixed bag. At Rick Owens, Prabal Gurung, Schiaparelli, and Alberta Ferretti, sky-high heels were paired with ankle-grazing skirts. According to the theory, this spells bad news for the economy, but since the first coronavirus vaccine was announced stock markets have actually been going up.

Elsewhere, Versace’s platform brogues offset micro minis speaking to the Y2K trend that is still going strong. The return of painfully high heels could also be the start of a mid-late 00s comeback as opposed to a reflection of the economic crisis. We have already seen UGGs and skinny jeans creeping back into our wardrobes across the course of the last few years – and the 20-year rule would dictate that the post-Y2K 00s will be the next era we recycle. In fact, if Saint Laurent’s recent show was anything to go by, the fashion clock has ticked forward into a new age.

A year on from the first lockdown, teetering down the high street to fall in and out of clubs and bars is likely close to the top of many of our to-do lists. Fashion mirrors these desires. We’re all dreaming of wild post-lockdown nights out, but the question remains whether these sculptural six-inch high heels will be the shoe of choice off the runway. After a year of comfy footwear most of us are out of practice at walking in heels, if we were ever any good at it in the first place. There’s a fantasy element to these towering shoes that might not trickle down to the mainstream, but still provokes escapist daydreams that are the perfect antidote for these times.

While it’s a leap to say that heel heights and skirt lengths can conclusively predict the direction of the economy, structurally ambitious clothing and accessories like we saw in the AW21 collections speak to our desire for escapism when the economy is in a bad way. Towering platforms and ankle-grazing skirts are more than just impractical runway trends. Economists may not study these trends when they consider the future of the stock market but what we wear, consume, and purchase articulates our desires and indicates the direction we hope that society will go in. Right now that direction is straight to the pub to show off the shiny new shoes you bought in lockdown.