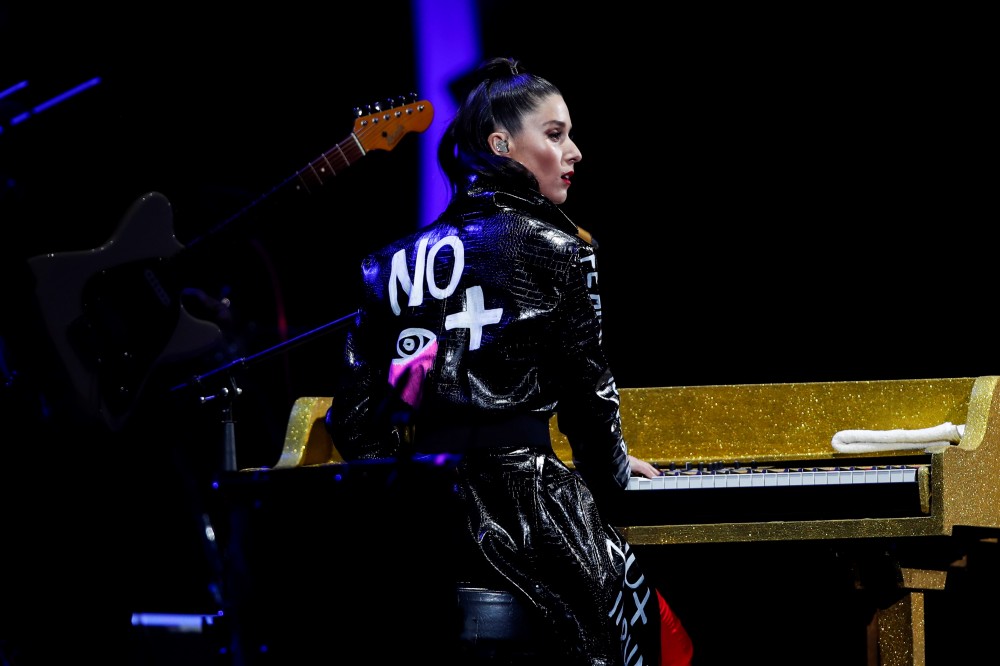 It’s been nearly five months since a wave of austerity measures, proposed by Chilean President Sebastián Piñera, sent Chile spiraling into civil unrest. Outside the grounds of the 60th annual Viña del Mar International Song Festival on Monday night — the longest-running music festival in Latin America — up to 800 protesters demanded justice for human rights violations committed by Chilean police and military during the 2019 protests — including but not limited to murder, rape, and torture.

Headlining Monday night’s show was 31-year-old Francisca Valenzuela, one of Chile’s most beloved, and outspoken, pop artists. While hammering out her 2007 ballad “Los Poderosos,” or “The Powerful,” Valenzuela sat defiantly at her glitter-flecked piano wearing a black vinyl trench coat scrawled with the words “Feminism is revolution,” “Down with patriarchy” and “No more impunity” in white paint — words pointedly aimed at Piñera’s administration. Waving a green bandana in support of legal abortion, Valenzuela — as well as Mon Laferte and many other female Chilean artists — gathered onstage to dance the cueca, a folkloric South American dance. So the saying goes, well-behaved women rarely make history; and thanks to the unparalleled moxie of Chilean women, this year’s festival will be a difficult one to forget.

Why Adam Sandler's 'Thanksgiving Song' Is a Holiday Classic

Though endearingly referred to by fans as “La Fran,” Valenzuela seemed destined to make waves wherever she walked. Her parents, both esteemed Chilean scientists, sought refuge in California, thousands of miles away from Augusto Pinochet’s authoritarian regime. Born in San Francisco, Valenzuela would become a wunderkind of sorts: both an avid student of guitar and piano, as well as a published poet by the age of 12. Her first book of poetry, Defenseless Waters, included a foreword by the acclaimed Chilean author Isabel Allende.

As a teen, Valenzuela completed an intensive jazz music program at Berklee College School of Music, then kickstarted her music career back in Chile with her acerbic 2007 debut, Muérdete La Lengua. While touring alongside such divas as Julieta Venegas and Shakira, Valenzuela founded Ruidosa, an international activist network, music festival and online publication, which rallies around women and gender non-conforming people from throughout the music industry. Yet by the time Rolling Stone speaks to Valenzuela on the phone, she uses two words to describe her mental state over the past few years: “Burnt. Out.”

Released in January on Sony Music Chile, Valenzuela’s latest album, La Fortaleza, or The Strength, is her first release since her 2014 synth-pop LP, Tajo Abierto. The new record chronicles not only Valenzuela’s own purview, but that of many accomplished young women of the 21st century. Swashbuckling tirelessly through life like the protagonists of their own heroine flicks, they face down adversaries in classrooms, boardrooms, and bedrooms alike. But their most crushing foe of all is their own relentless pursuit of perfection. According to Valenzuela, it took embracing the opposite facets of herself — “all the fragility, the insecurity,” she says — to feel motivated to write again.

“I was struggling with touring, I was struggling with being on stage,” Valenzuela tells Rolling Stone. “I had been pursuing music since I was 17. Having to be one-hundred-percent available all the time, having to feed the machine, get the right algorithms… You become a product yourself. I was going through anxiety, depression, all these things. I thought if I was going to pursue this, how can I make it work for me? It took finding strength in myself, and in those around me in the collective, to help pull myself out of those dark places.”

Written and recorded in Los Angeles, Mexico City, and Santiago de Chile, La Fortaleza was initially scheduled for release in October 2019. Yet the record was tabled upon the start of the country-wide uprising, which was followed by a brutal military response that left at least 20 dead and hundreds injured by gunfire. Many demonstrators were intentionally shot blind by police. That’s when Valenzuela decided to take time away from her life in California and join those resisting in Chile; the singer-songwriter actively participated in meetings with the University of Chile’s student union, and used her Instagram page to help collect medical supplies and donations of food and money.

“My album needed to see the light, but after what happened in Chile, it also needed to be re-contextualized,” says Valenzuela. ”I think [La Fortaleza] speaks to how we not only have to be strong individuals, but even stronger as a collective. We live in this system of neoliberal individualist thought; and I admit I’m under that spell at times. Chile was used as a lab experiment for these individualistic policies. But it’s important to have empathy, to connect with people, to hear stories that are different than your own.”

For an artist-activist like Valenzuela, focusing on her own interiority has often seemed like an exercise in self-indulgence; especially in a time when many people her age risk their lives in the streets, fighting to secure a more sustainable future. But in order to humanize herself, both to herself and the rest of the world, it was paramount to let herself sing from the heart. “I’ve always written and I will keep writing about the world outside of me,” she says, “but I need to write about the world inside of me, too.”

In the power anthem “Héroe,” Valenzuela adopts a brisk reggaeton beat to match the confident stride of her lyrics; then she indulges in a coquettish free-for-all on dance cuts like “Boca” and “Tómame,” which 20 years earlier, might have placed her on par with ed-up electroclash queens Peaches and Miss Kittin. Meanwhile, in “Normal Mujer” and “Ansieded (Peleo Con Las Sombras),” Valenzuela further deepens the dig into her psyche. “I’m better than this, I know,” she repeats in Spanish, “I fight with the shadows without knowing why.”

Valenzuela says she’s largely found inspiration in the work of Prince (“for his discipline, his sensuality, humor, boldness, and freedom”) as well as Björk (“for her curiosity and relentless desire to explore and grow”). She also cites the dauntless godmother of Chilean folk music, Violeta Parra, “for saying the things we all feel and see but sometimes don’t notice we feel and see… no gimmicks, no pose, just three chords and a truth.”

In the track “Al Final de Mundo,” or “At the End of the World,” Valenzuela teams up with pianist Claudio Parra, whose legendary rock band, Los Jaivas, fled the Chilean dictatorship in the late Seventies. The duo reunited onstage at Viña del Mar on Monday night, where they shared their fight song with 15,000 concertgoers, and thousands more viewers worldwide. This cross-generational performance represented a full-circle moment for Valenzuela, Parra, and the embattled Chilean people. “We have an opportunity to unite music and pop culture with social transformation,” says Valenzuela.

The Chilean government is now gearing up to completely rewrite its current constitution, which has been in effect since the days of Pinochet’s rule. “The idea is to have a referendum for our new constitution in April,” says Valenzuela, whose latest mission is to educate her fans on the process via social media. “This referendum will determine what is the mechanism of that constitution that’s going to be written. It can either be by congressional commission, or open to the public, which is what we are pushing for. We want civil society involved — to have the participation of women, participation of indigenous communities. To have a diverse commission.”

“I feel so charged now,” says Valenzuela. “It feels like I’m painting with new colors that I’ve never had before.”

Valenzuela will perform intermittently across the U.S. and Mexico, starting March 1st in Los Angeles; for tour dates and tickets, visit FranciscaValenzuela.com. La Fortaleza is out now.