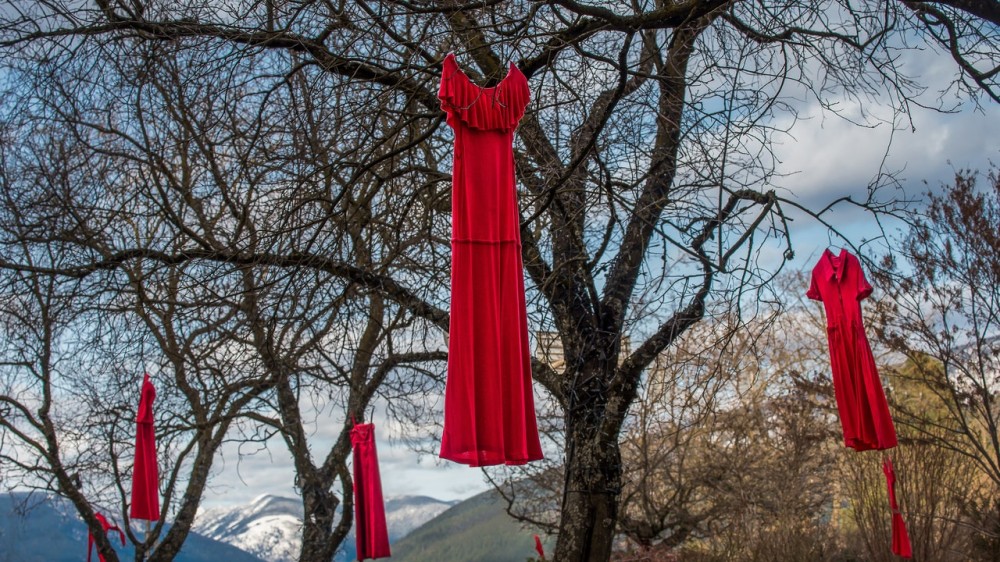 In downtown Nelson, British Columbia, just outside of Nelson City Hall, about a dozen red dresses currently hang from the tree branches leading up to the main building: off-the-shoulder maxidresses, minidresses, and long-sleeve styles. Their bright red hues certainly stand out against the stark, industrial surroundings. These dresses, of course, hang there with a purpose. They are part of artist Jaime Black’s ongoing art series, titled The REDress Project, which highlights the epidemic of violence against Indigenous women. Each dress symbolizes an Indigenous woman who has been murdered or is missing, representing just a portion of thousands of people.

The dresses travel from place to place, but the location is always intentional. Right now, they’re on display at Nelson’s Touchstones Nelson museum until May 2, and just outside of it, near the city hall. “We install the dresses in more high-traffic spaces, so more people can see them,” says Black. A Métis and Finnish artist based in Winnipeg, Black began this impactful art series in 2010. She was inspired by a demonstration she saw in Bogotá, Colombia, when she came across a group of local women who had gathered in the capital’s public square. “They were all women who had experienced having people in their families go missing, without any kind of recourse,” says Black. “There were about 40 women wearing red dresses. One woman in a red dress climbed to the top of the statue in the middle of the square, and she called out, ‘Where are they?’ I thought, We need to bring this energy home.”

In North America, the scores of missing and murdered Indigenous women—known as MMIW, an acronym created by Indigenous journalist Sheila North Wilson in 2012—don’t get the mainstream attention they deserve. In the U.S., homicide is the third-leading cause of death among Native women ages 10 to 24, according to the Urban Indian Health Institute, and Native women are victims of murder more than 10 times the national average, according to the U.S. Department of Justice. In Canada, the government’s National Inquiry found similar horrifying statistics, including that Indigenous women are seven times more likely to be murdered by serial killers than non-Indigenous women.

Small steps have been taken to address this epidemic, which is often the result of systemic racism. Earlier this week, U.S. Secretary of the Interior Deb Haaland—the first Indigenous woman in that role—announced the creation of a new unit that will investigate missing and murdered Native Americans. But the issue rages on. With her REDress Project, Black hopes to give these Indigenous women a much-needed voice, while educating others who may not be aware of what’s going on. “The art replaces statistics in a way,” says Arin Fay, the Touchstones Nelson curator who worked with Black on the exhibit. “People get really bogged down and don’t know how to respond to the numbers—but the dresses powerfully communicate it without all of that.”

Black showed her first REDress Project at the University of Winnipeg in 2011, and the project has since traveled to many different cities across North America. The red dresses displayed have all been donated to Black from both Indigenous and non-Indigenous people. “I ended up getting 300 dresses donated from all across Canada and beyond within the first year of doing the work,” says Black. “People were really receptive to showing their support for families.” The color red symbolizes many things—blood, anger, love—but was ultimately chosen because it’s eye-catching. “Those dresses have such a powerful presence. They are a reflection of the power and strength of Indigenous women that have come before us,” says Black. “When people walk by the red dresses, they can’t [ignore them.]”

The REDress Project has since evolved into a national movement. The color red has become a symbol for MMIW across North America in general, extending well beyond just Black’s work. In Canada, May 5 is now Red Dress Day, when people of all backgrounds are encouraged to wear red to raise awareness. Indigenous activists also frequently wear red at MMIW gatherings, where red handprints are often painted onto their faces too. Black’s REDress Project has clearly played a big role in red becoming the official MMIW campaign color, though many wearers also say red is the only color that spirits can see. They wear it so that the souls of those they’ve lost can be with them.

Indigenous designers have begun using red in their collections to honor MMIW as well. In 2019, a group of designers at Vancouver Indigenous Fashion Week showcased red dresses on the runway. One of them was Métis designer Evan Ducharme, who created a red jersey dress, titled The Honor Gown, that was gathered and draped lightly across a corset base. “I wanted to create something timeless, formidable, and reverential,” says Ducharme, who adds that fashion can be a powerful tool to spread important messages. “The fashion industry has a great deal of visibility in today’s cultural climate, and maintains a firm grasp on the public’s attention. Attention can be harnessed to bring awareness of this epidemic to the public and the industry—one that historically has done very little to uphold the humanity of Indigenous peoples.”

Black says watching the spirit of her REDress Project grow and evolve over the past decade has been surreal to watch unfold. “The more work that we do, the more awareness there is,” says Black. She adds that the red dresses can be “whatever we need them to be,” whether we have a personal connection to them or not. “If a family needs a place to come and connect to their loved one, the dress can do that for them. If we need to be educated, those dresses become a teacher,” she says. “The dresses always tell a different story.”