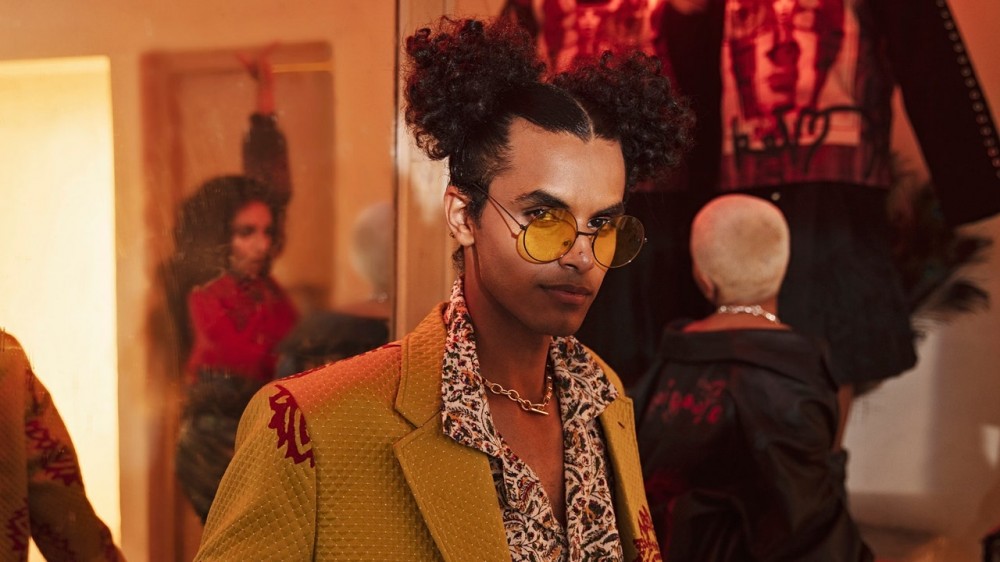 Streetwear is growing up. Once relegated to the wardrobes of hypebeasts, new labels are using their graphic hoodies or jackets to grab your attention and to make a powerful statement about politics or culture. It’s a global movement, too. Mobilize, for instance, uses its drops to educate others about Indigenous life and traditions. There’s also a new streetwear label out of Pakistan who is also championing South Asian culture—and its pieces are just downright cool, too.

Rastah was founded in 2018 by cousins Zain, Ismail, and Adnan Ahmad, who are based out of Lahore, Pakistan. Zain, the creative director of the label, grew up in London, Toronto, and Vancouver as well, but is consistently inspired by the city. “Lahore is an incredibly big city, and incredibly chaotic—it stimulates you a lot,” he says. “[As a result,] there’s a lot of noise and prints in the clothes.”

The brand’s latest fall collection, titled ‘Volume V,’ represents what Zain describes as a mix of Eastern prints with Western silhouettes. The streetwear staples like hoodies and tees are rendered in colorful, graffiti-style prints and complex logos, all made with traditional Pakistani methods. A standout yellow silk suit, for example, is finished off with printed red roses, which were block-printed by hand by Rastah’s in-house printer, Aslam Mirza. “The woven fabrics for the jackets are made on a traditional Pakistani hand loom, which is sadly dying a slow death,” says Zain. “And most of the printing techniques are done using hand-carved wooden blocks. To revive these forms of artisanship, we have to reinterpret them.” Overall, he wanted the collection to pay tribute to Pakistan’s unique craftsmanship, but for it to have a cooler, more youthful feel too. “It’s something that really hasn’t been done before in this country,” he says.

Some details are more obviously related to Pakistan, at least to those who see Rastah designs on the street. The “Notoriety” twill jacket, which Riz Ahmed just wore, features images of Zain in Lahore when he was just five-years-old, as well as photos of Pakistani icons, such as Imran Khan. “He was a cricket player, and is also the Prime Minister now,” says Ahmad. “In 1992, he won us the World Cup, so that was a big deal for the country.” On the back of the jacket, there is also an image of the Murree Brewery, the only brewery in the country.

Other pieces make bigger political statements. On the “SSSS Collage” hoodie, for example, Ahmad drew from a personal issue that continues to impact many Pakistani people. On the back of the sweater is an image of a boarding pass with four “S” letters on it. “You basically get these four S’s when you go through ‘random’ secondary screening at the airport,” Ahmad says. “I began to realize that I was going through the secondary screening every time I would travel to the United States. I thought to myself, ‘how could it be random if I’m always getting randomly selected? And how could it be random if everybody getting randomly selected is from my part of the world?’” He says when he shared the design on his social media pages, many people from Pakistan reached out. “Lots of brown boys and girls who’ve been in that situation commented saying they loved it, and can relate to it,” he says.

Going forward, Zain hopes to continue using his streetwear to champion and share aspects of his Pakistani culture. “I knew that I was a storyteller, and somehow, fashion is what I decided should be the medium through which I tell these stories,” he says. Zain also hopes to empower fellow creatives to continue making space for themselves in the industry (he often collaborates with other Pakistan-based artists). “This part of the world has so much to offer in terms of storytelling, artisanship, and technical craft, but on the brand level, we don’t get that recognition,” he says. “Through stuff like this, we can hopefully inspire artisans to get back on that horse, and to do what they love to do. We’ve got so much to offer.”